Special Visitor and a tour of the Empire Ranch Grounds

This morning I woke up early and just laid in bed while the sun warmed up the grasslands.  When I got up, it was only 7 o'clock.  Not a cloud in the sky.  Going to be another beautiful day.

I'm glad I got up early.  I had a feeling in my bones that I may have a visitor today and sure enough at 8 o'clock Nancy of Kissack Adventures sent me a message asking me if I was up yet.  I guess she knows I'm a late sleeper :)).  She said she would be by around 10:30 for a visit.  Asked if I needed anything and I asked it she would bring a quart of milk.

My horse neighbors were off on a ride again this morning around 9 o'clock this time. 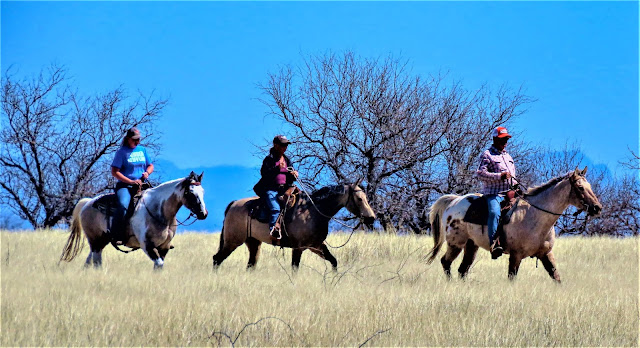 So, I cleaned the floor, made my bed and put on my best dirty clothes.   Finished my breakfast and Yuma and I were open for visitors.   Sure enough, Nancy rolled up in her Jeep at 10:30.  No problem finding the place either.  And there was the quart of milk on her car seat. :))

Nancy has two dogs of her own, so she was a natural with Yuma.  And Yuma was on his best behavior too.  We soon sat down on the patio and talked about everything under the sun.  I had no idea what she has done in her life.

Grew up on a cattle ranch, traveled in her RV all the way from Alaska to Maine.  She was a Harley rider and a scuba diver.  Nancy is a down to earth cowgirl.  I tried to make my life as an insurance man sound exciting,  but I don't think she bought it. :))

We sat outside on this beautiful morning and early afternoon watching horses and their riders,  large hawks flying by and Yuma chasing after them.  Listening to the wind blowing through the grass and the Ironwood trees.  Also, the bellow of a bull calling to the cows.  Before we knew it, it was 1:30 and time for Nancy to head back towards Tucson.


We'll keep in touch in Blogland till we meet again.  I had a wonderful visit.  Maybe next year I can show her a little boondocking and she can show Dolly and I a little RV resort parking.  We could have the best of two worlds.

As we were walking to her Jeep, Nancy noticed the horse people had packed up and left while we were talking.  No more horses nearby for now. :((

After Nancy left, Yuma and I made a water run into Sonoita.  They had no kiosks for water, but the nice man in the propane store allowed me to use his outside spigot to get five gallons of drinking water.  I appreciated that.  I don't think Sonoita caters to outsiders much.

Now to yesterday and the Empire Ranch.  Yuma and I headed over there just after noon yesterday and there was not a soul there.  No one!  So I drove up to the ranch and just walked around taking pictures.  I'll let you go along with me on my tour of the outside.

There is a lot of information about the history of the Empire Ranch on the internet if you want to learn more.  The ranch had been in disrepair but it is slowly being renovated.  It has been a slow process and each year I see a little more progress.

The first area I stopped at was the corral.  It is no longer used, so we will have to imagine the sounds of the cattle as they were processed through.  It was large and I'm sure lots of cattle were branded here and also loaded onto vehicles or wagons originally. 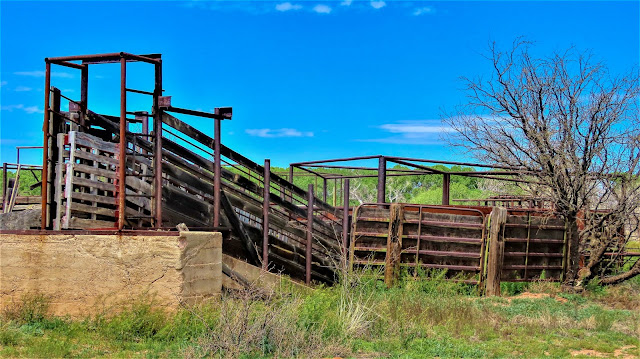 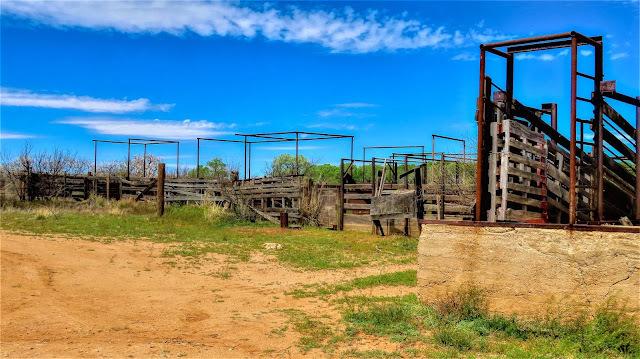 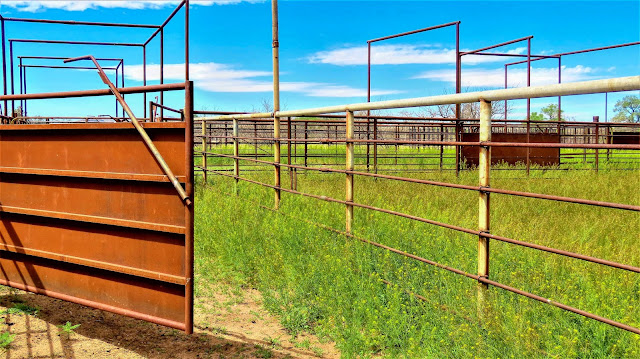 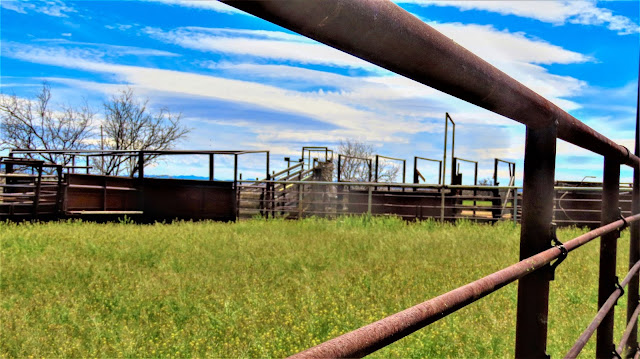 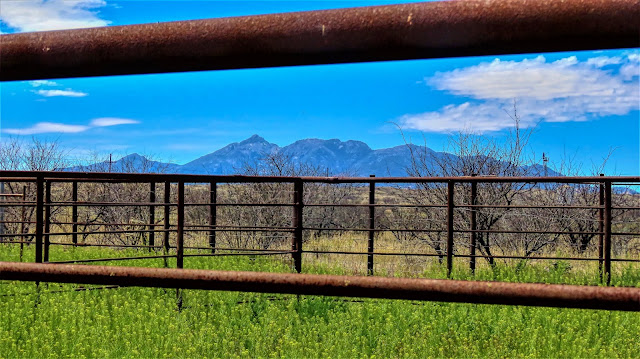 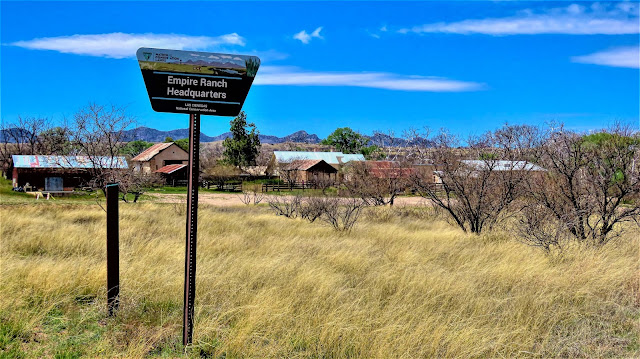 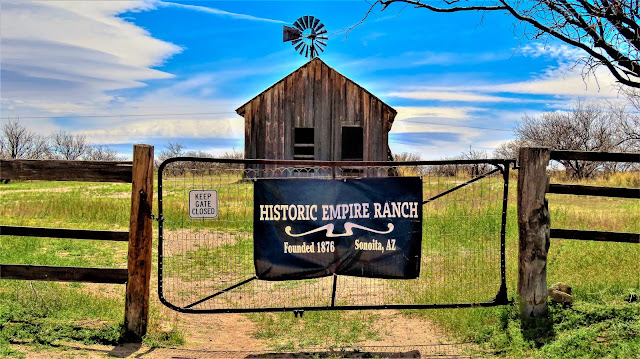 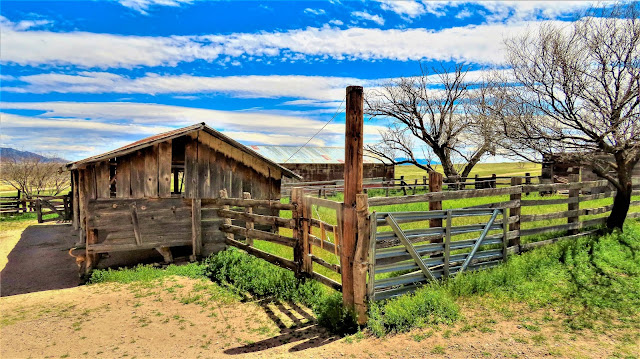 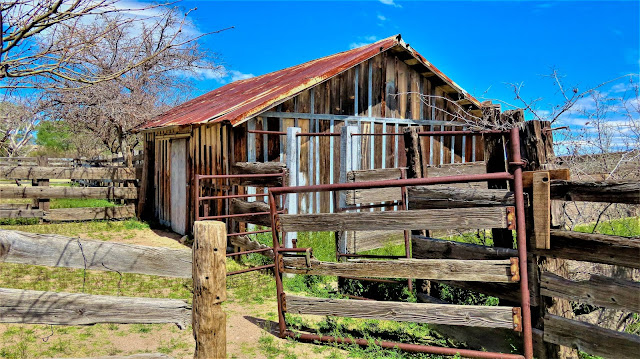 The side of the house had a drive in area I believe was used for deliveries to the house.  I'm standing in a back porch area of the house.  This is a sprawling house and you can easily get confused as to what is what. 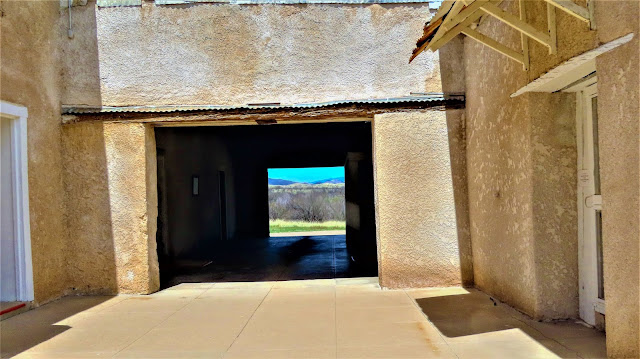 I walked up to the kitchen door and tried turning the knob.  Darn, I've already got enough pictures for the day.  You'll just have to wait till tomorrow to find out if the door was locked or not.  :))

Had a wonderful day.  Thank you, Nancy for stopping by.