Snake and caterpillars on the San Pedro River

This morning was another 8 o'clock get up day for some reason.  We were eating breakfast when I decided to give Nancy a heads up that Yuma and I were up for another adventure if she had somewhere in mind.

She did and Yuma and I were waiting and ready to go at 10:30.  We are headed for Mission San Xavier del Bac.  Don't know what it is?  You'll have to wait till tomorrow because I've got to finish my Fairbank hike today.  If you want to get a view of the Mission from an expert. go to Nancy's site, Kissack Adventures.

We finished our walk around the cemetery and made our way back around and down the hill to the loop trail.  Wasn't long before we saw a sign saying 1.7 miles back to Fairbank or we could finish the remaining 2.1 miles of the loop.   I'm not one for going back and neither is Nancy, so onward towards the river we went.  From the top of cemetery hill it didn't look too far to the river. 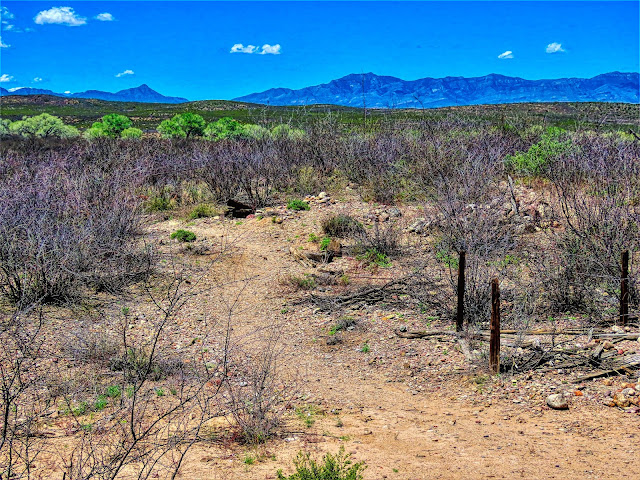 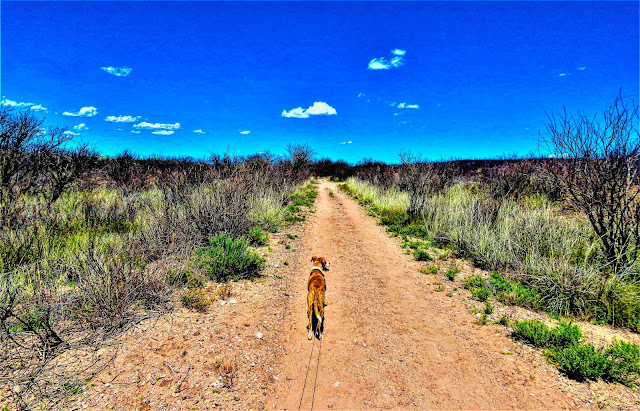 It wasn't far and we could see some kind of structure to our right. 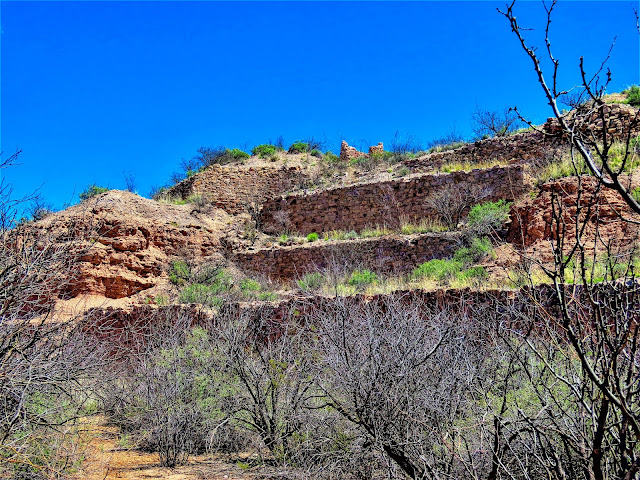 The Grand Central Mill used to stand here.  From what I understand the silver ore from Tombstone was brought here and it flowed down the hill as it was being crushed by huge piston crushers to get to the silver.  Read the sign below for more information. 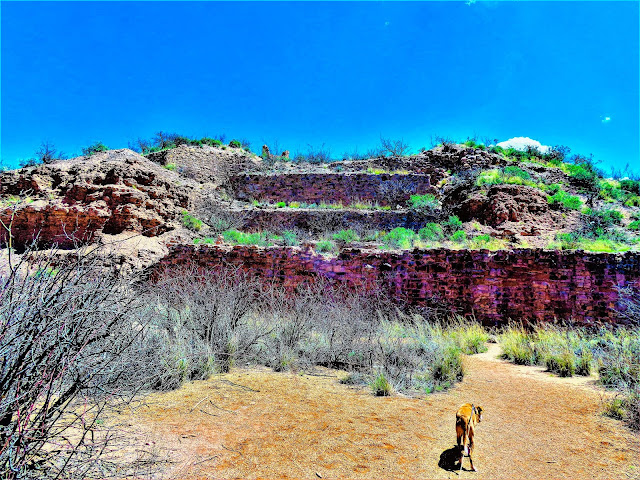 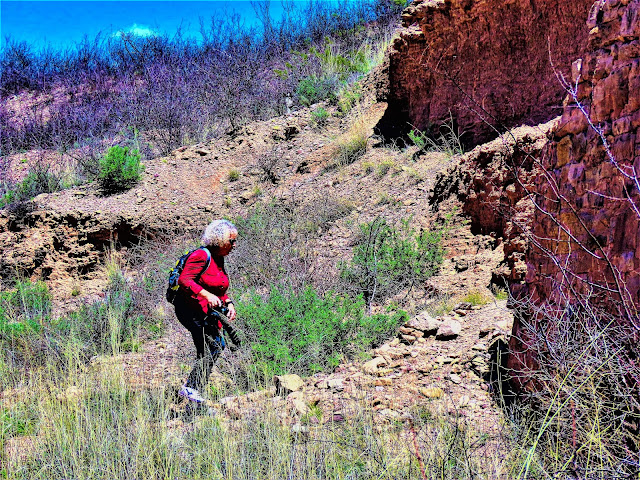 On the left side of the wall facing us was a break and Nancy decided to head up the mill face.  Just after this picture was taken, Nancy jumped back and yelled "snake".  I rushed over to see of course and asked "where?"  Nancy points to the very bottom of the wall.  The snake had slithered right in front of her and along the wall face.  Fortunately, it stopped just long enough for us to get a picture of it. 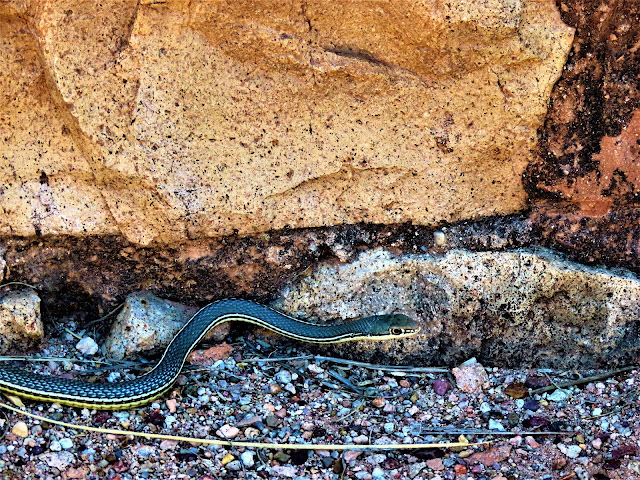 It was fast as lightening and about two feet long.  I Googled it and it is a non-poisonous common kingsnake and they grow to around 3 1/2 feet when full grown.   This one was getting there in size.

As we got closer to the river we started seeing quite a few caterpillars crossing the trail.  We didn't want to hurt them so we watched our step.  Soon we came to another foundation at the edge of the river bottom drop-off.  We didn't know what it could have been but assumed it was a loading platform to take the silver to the boats on the river. 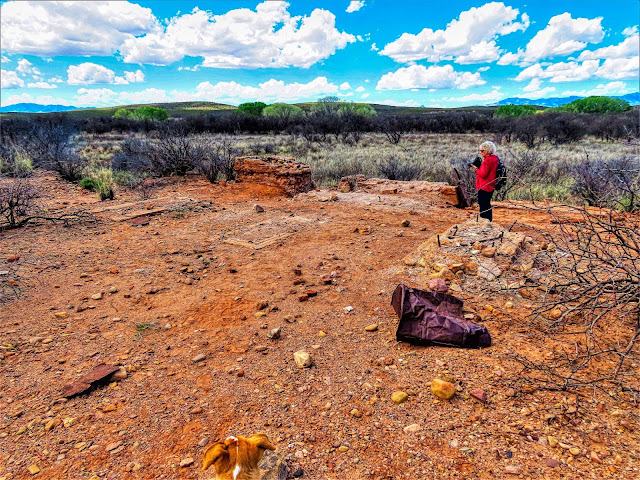 Nancy looks at the bricks on top of the foundation and noticed they said "Made in Los Angeles". 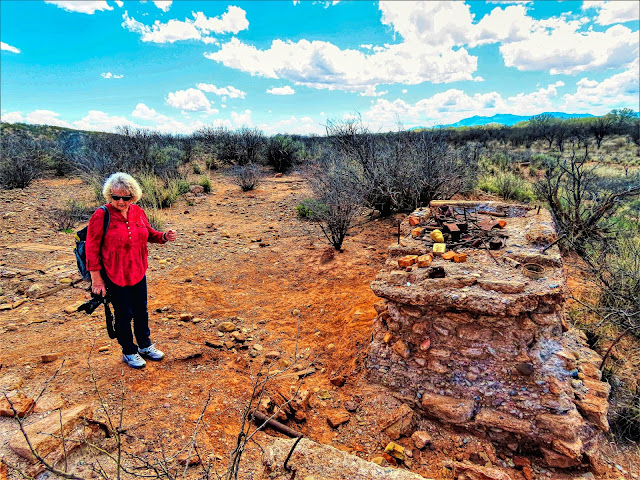 Not much further we finally could see the San Pedro River down below the bank.  Not much water right now, but you can tell at times this river can be a monster!  Love taking pictures of rivers in the desert.  They always display such contrast to the stark brown of the desert. 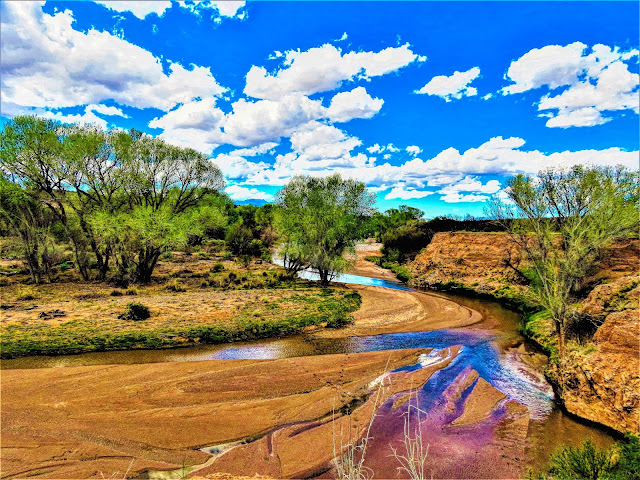 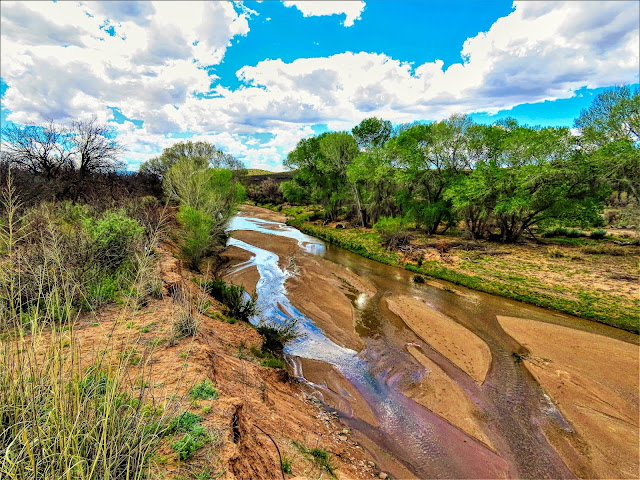 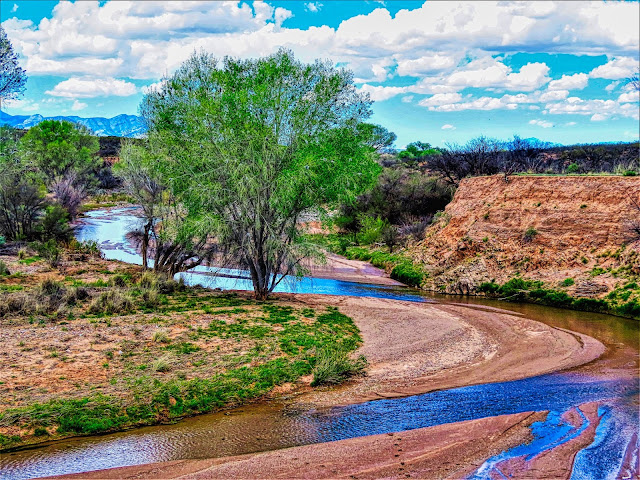 Now it wasn't occasional caterpillars.  They were everywhere.  Near the river we couldn't walk on the trail at all without squashing caterpillars.  Hundreds and hundreds of them.  Some going towards the river and others heading away.  No rhyme or reason to their movement, but I'm sure there is one to them.  Then Nancy spots a bright green beetle moving through the leaves.  Then she sees another one and then she can hear the leaves rustling as if there are more of them moving around. 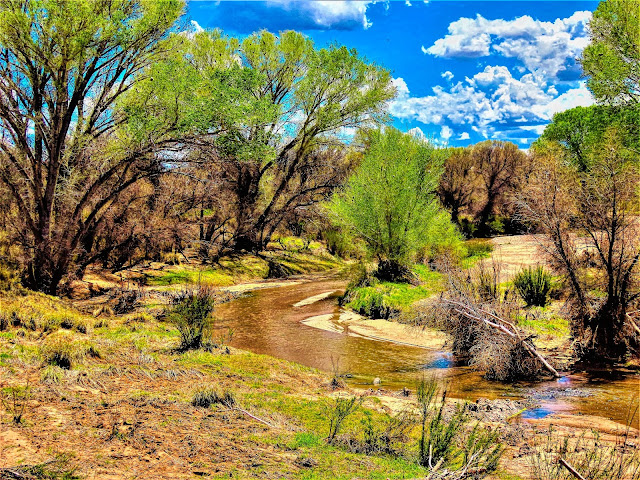 We headed down to the river bank thinking we could sit down and cool our feet in the clear cold water of the river.  But there was no place to sit.  There were caterpillars everywhere.  This is just one rock along the river.  They were in the river and many were dead from drowning.  Others were coming to shore and clinging to everything available.   No sitting along this river. 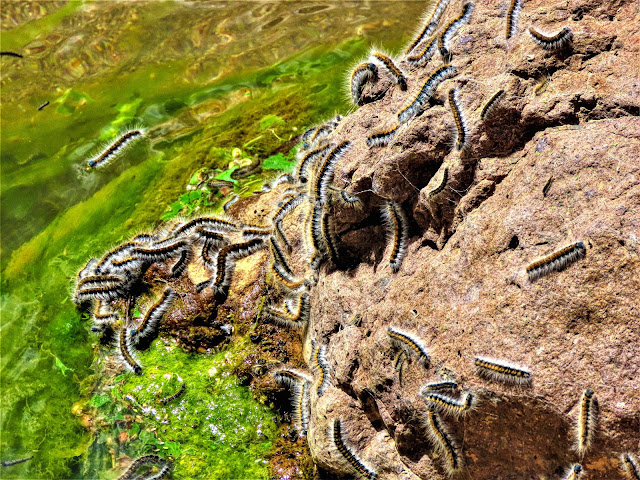 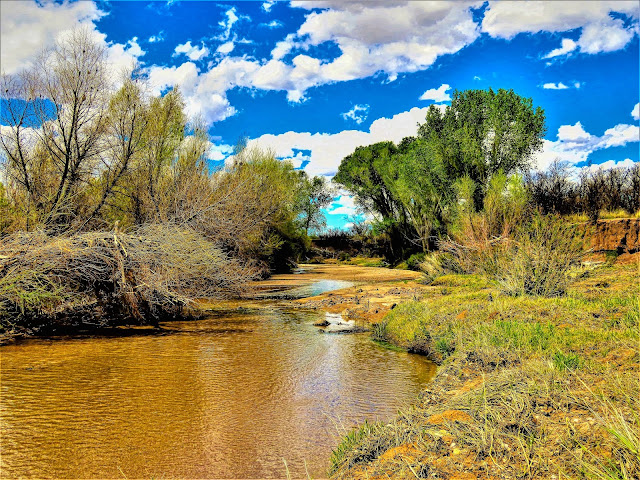 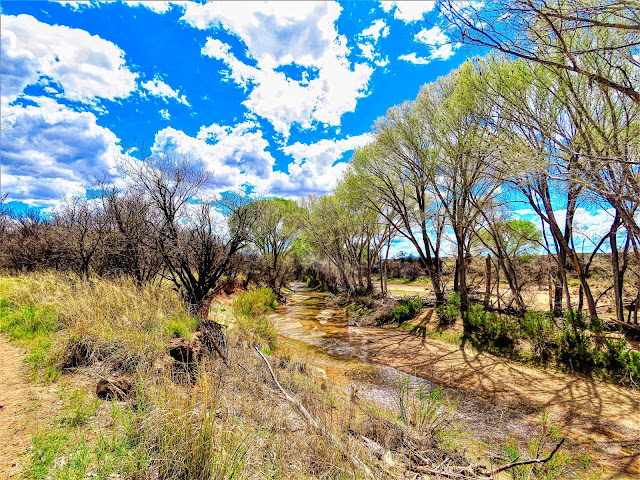 Nancy looked up into the trees and told me to look.  There were so many caterpillar nests up there I'm sure they will kill those trees.  Because of the more than average Spring rains, these harmless caterpillars named Woolly Bears are much more abundant. 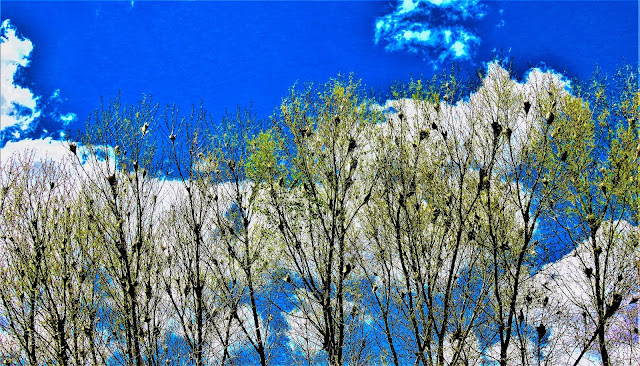 As we walked the trail for some reason the caterpillars liked me.  They would hook to my pants, my shirt and one time I was walking along and my eye caught something hanging down in front of me.  There was one looking me right in the eye from the rim of my hat!  And it did not want to leave. 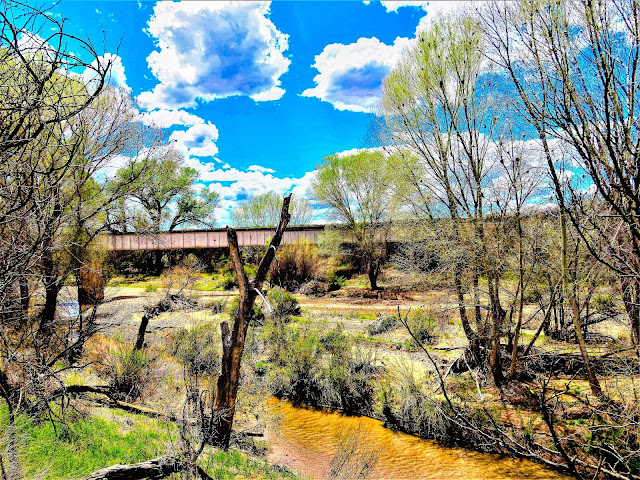 Finally we could see the old train trestle ahead crossing the river.  The railroad ties and rails have long been gone, but there is so much rock foundation that nothing grows along its path.  We got up on the train track and walked along it knowing it would lead us back to Fairbank. 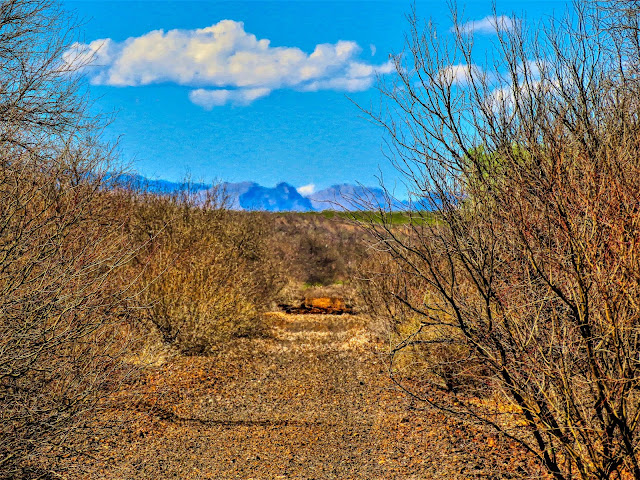 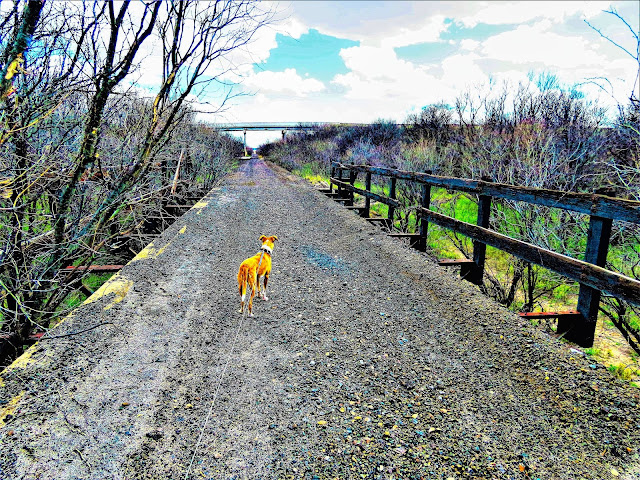 As we got close to Fairbank, we ended up at the old train platform.  It's hard to imagine who may have walked on this platform back in the day.  Nancy told me there was a hotel behind the platform but it was torn down when hwy 82 was built. 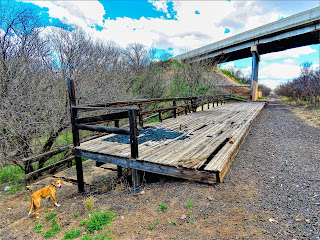 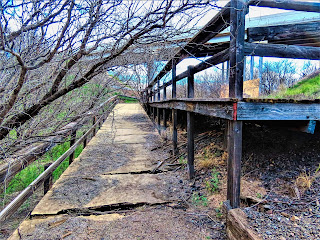 We finished the loop where we started.  At the long building.

I will admit, the miles in this hike was almost more than my feet could handle.  I was definitely walking gingerly by the time we got back to the Jeep.  But in a few days I will be ready to go again.  Hopefully not quite so far:))

As we entered Sonoita, I stopped in the middle of the road and got another one of the welcome signs. 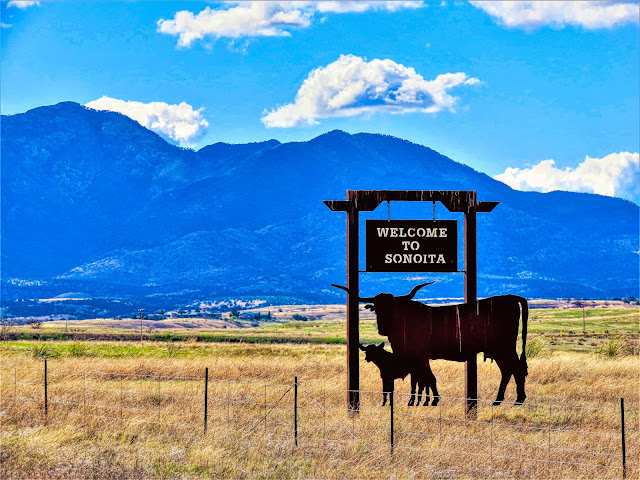 Yuma and I were home by 4 o'clock and both of us were done for the day.   Thank you for coming along with us on this journey.  Interesting things happened along the way and the ghost town of Fairbank has many secrets we will never learn.

See you later.
Posted by Doug Laning at 8:28 PM