This morning I was up early around 8:30 so I could move the RV over next to Tom and Deb because they are leaving for the Quartzsite area around 10 this morning.  I'll just take their site and be closer to Shane and Cathy for the remainder of my stay.

After they left I jumped on the suggestion that Mark the repairman gave me for $50 hoping it was the solution.  Of course not having all the equipment of an electrician and no where near the knowledge, it was a long, slow job for me with Nick's help.  Poor guy 😪

Nick gave me a yell from inside the coach.  I had a window open and a hummingbird flew in to visit, but forgot the way out. 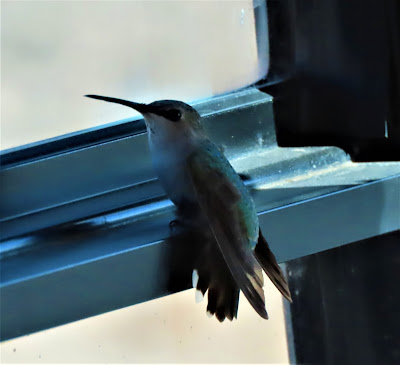 Nick gave it a hand to shoo it out and the little guy hopped on his finger and Nick held it outside and off it flew.  They are such cute and curious birds 😍 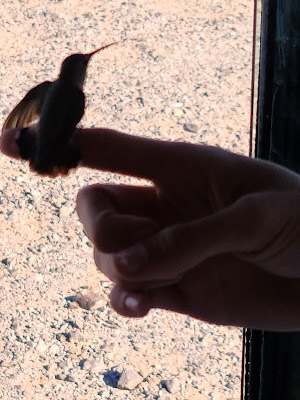 Finally, I got it done good enough to test.  It was early afternoon when I turned the generator off and the new inverter/converter on in hopes it would not shut itself down like it had been doing previously.
I quickly ran into the RV and opened the refrigerator to see if the light was on and it was.  That means the inverter was working.  Then I checked the gauge to see if the batteries were charging and they were which means the converter is working.  Mission accomplished!!😀😀😀
For the remainder of the afternoon, Nick and I laid in the sun.  Just a gorgeous day with clear skies, no wind and a temperature of 72.  Just perfect!  Around 4 o'clock I joined Shane in his tent for a little discussion about world events as we see them and I was home a little after 5 o'clock.
We remembered to pull dinner out of the fridge last night so we had a good filling dinner and now it's time to finish the blog and get some dessert and hit the sack.  Been a long day.
Thanks for stopping by.
Posted by Doug Laning at 9:45 PM