Even though I took Yuma out before bed he still got up around 2:30 to go out.  Darn dog!  Does it just to irritate me I bet.  Got up around 9 o'clock and it was mostly cloudy and breezy out.  Didn't care since I planned on watching football somewhere dry and warm.

I was working on why my batteries drop so fast after I run the generator for a number of hours.  Got on the phone with my son Jim and we ended up discussing and texting pictures and when I got off the phone it was ten after one and I realized I missed the Bloggerfest.  Just as well, it was windy, cloudy and spitting rain.  I can't believe I'm getting so forgetful!

It rained most of the afternoon but mostly very lightly producing low clouds and fog.  Had to run the generator all afternoon to keep my batteries up 😖 Hate it when that happens!

I worked after that at attempting to get ready for the football game at 2:30.  I got all the PVC piping I had and ran the TV antenna and the Internet booster as high as I could.  About 25 feet high. 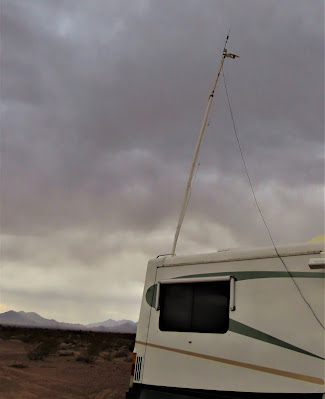 I tried getting CBS on TV and I could but it was so broken it was really not good enough to enjoy the game.  Then I played around with streaming using the CBS app and my Dish account and it worked great.  By the time I got this working, the game had already started but it worked perfectly.  I was so proud of myself. 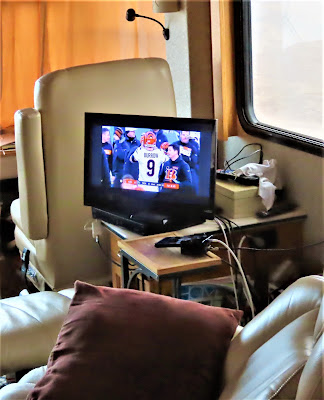 Watched the first half of the game and made a big mistake.  I logged out to charge my phone during the half time.  I could never get a good stream connection ever again.  Missed the last half trying over and over and by the half time of the second game I gave up.  More streamers than available streams the error message said.

Before fixing dinner consisting of cheese burgers I decided to put some heat in the room.  Brought out the Big Buddy that I hadn't used for several weeks and tried to light it and it would never light.  Must have a clog in the long gas line but I can't get on the internet to Google how to unclog it.  How did I ever get so dependent on the internet?😕

Why does everything go wrong on a cloudy windy rainy day?  I came out to the southwest so I would at least have sunny warm days when everything goes to pot.  At least it is less depressing then.

Dinner went well and I got a text from Dolly saying the 49ers beat the Packers in the Packer's own stadium😲  What a shocker.  Dolly has the 49ers in the family pool so she is moving on.  The rest of the world is shocked😱

Since I had nothing else to do before bed I washed the full sink of dirty dishes.  I can't remember when I did them last but I know I was running out of clean ones.  That made me feel better to have a nice clean kitchen to wake up to tomorrow.

Speaking of tomorrow there are three games so I may be sitting in a bar in Quartzsite tomorrow with Nick while poor Yuma stays home.

Been working on this short post forever.  Glad there are only three pictures.  Watching them upload was like watching paint dry.  It's nearly 11:30 and I'm done with this day.  Tomorrow has got to be better.

Thanks for stopping by and forgive my bitchy mood😫