This morning I think Yuma was tired from yesterday's activities too.  He slept in till 9 o'clock same as me.  It was overcast out but already 60 degrees.  They are calling for another 76 degree day with partly cloudy skies.

We took our walk and then laid outside for awhile as Nick was still sleeping.  The flag makes quite a bit of noise when the wind blows and it wasn't long before it picked up.

My tape job didn't hold the flag in place, so once Nick got up and we had breakfast, it was time for a little flag adjustment.   When I get to town someday soon, I'll get eye bolts to run through the piping so I can raise and lower the flag quickly.  For now I drilled a hole through the piping but just ran a clothesline rope through the top and bottom to hold it and Nick put it back in place. 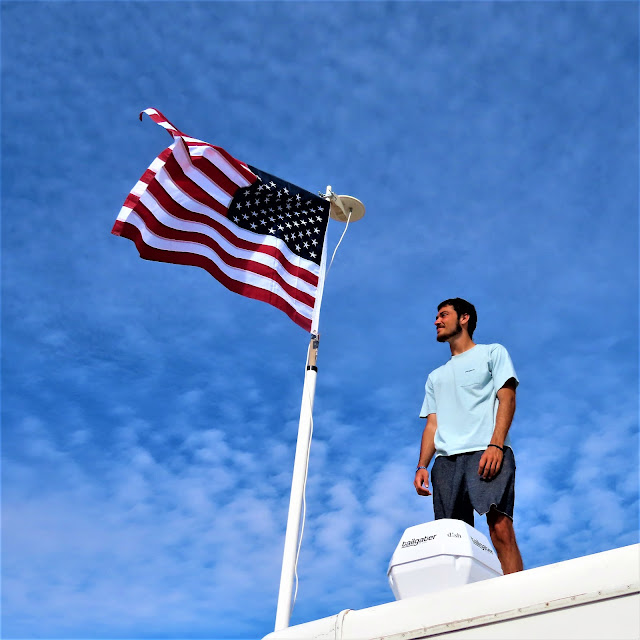 Can't raise or lower just yet, but soon.  Wasn't long before the winds were at 20-25 mph and the flag was flapping furiously, so had to go up and tie the flag down to stop the pulling and noise.

As we soaked in the sun, I was wondering why the sparkers on my burners weren't sparking to light the gas burners.  I am using matches and getting tired of it.  They worked earlier in the trip, so something has changed.  Went inside and took things out from under the sink and started my investigation.

Now, don't laugh!😁  There was a plug wire coming from the sparkers and when I pulled it I saw a wall plug at the other end and under the sink area was an electrical outlet.  Plugged it in and the sparkers sparked.  Told you not to laugh!  I guess I had unplugged it earlier in the trip while working on something under the sink and failed to plug it back in.

Gave Yuma his first bath today.  He was way overdue, but I just wasn't up to it while fighting the big gremlins.

Around 3 o'clock I decided one more small project.  I have two older AGM batteries I didn't turn in when getting the new ones.  I also have a 600 watt inverter and two 100 watt panels that I have been carrying around but not using.

Time to put them to use.  I placed the solar panels outside close to the window where I have now placed the two batteries and converter.  They are on the floor near my table and where I have placed my TV. 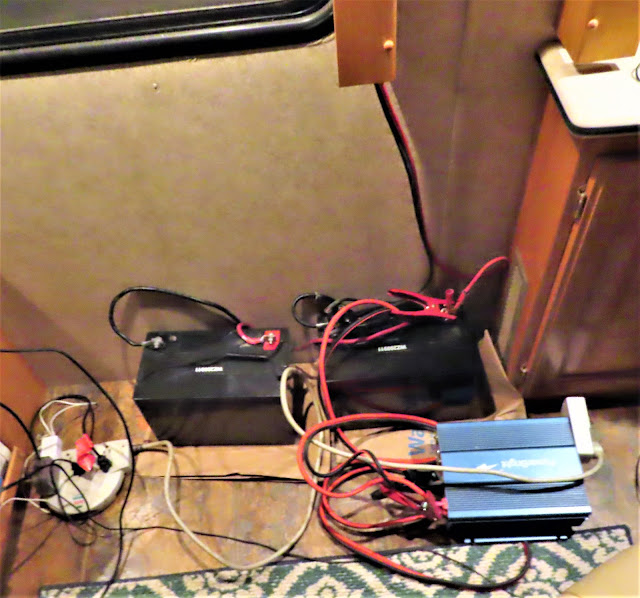 I am going use the power from this setup to charge all my personal stuff like phones, cameras and laptop plus run the TV and Dish at night to save on my new batteries to make sure the fridge makes it through the night.
Right now the electrical wires are not cut to size but when I do it will look more organized.  I was also thinking of keeping an eye out for a cabinet made of oak to fit the décor that I could place everything in so it is out of sight.  Can always use more junk hiding furniture 😅
It wasn't long before I had to set up the Dish to watch Gold Rush and White Water, so got my first use of my new setup right off.  We had burgers for dinner and now time to finish this blog, have a little pudding and whip cream and call it a night.
Thanks for stopping by.
Posted by Doug Laning at 10:26 PM