Sorry to say I had inverter thoughts running through my head last night.  I had thought my problems were behind me when I removed a couple of cables and the inverter started working.  But, I noticed my batteries were dying and did some research.  Found out those cables hooked DC power to my batteries to charge them, so this morning I hooked them back up but did not turn my inverter on.  So, no solar power indoors 😠 but solar power to charge my batteries 😀  I have an appointment with a mobile RV repair company to take a look at things on Wednesday.  Hopefully, they will fix me up!

We had a leisurely breakfast and then decided because it was a cool and windy day we would drive to Plank Road in the Imperial Sand Dunes.  Since my leisurely breakfast is much longer than Nick's, he went into Yuma and bought some needed items at Frys grocery.

We headed for the Dunes at 1 o'clock. 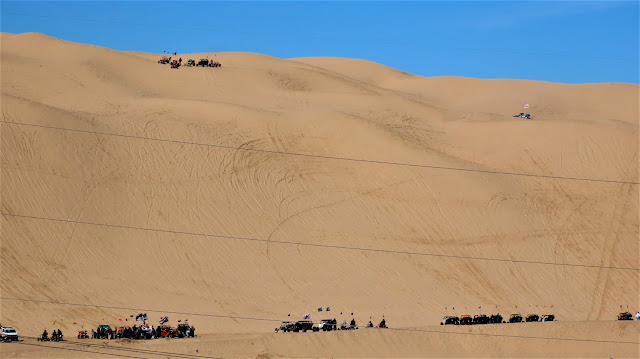 Because this is a holiday, I believe anyone who owned a vehicle that would go in the sand was out today!  I have never seen such a crowd.  As we were driving towards Plank Road, we could see that our Border Patrol was hard at work. 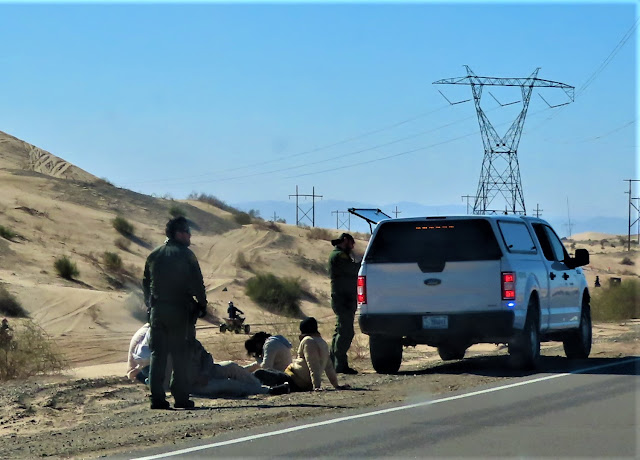 The wind was not affecting the sand too much.  We took a walk through the sand all the way around the part of Plank Road that has been preserved, but even that is on it's last legs in the environment. 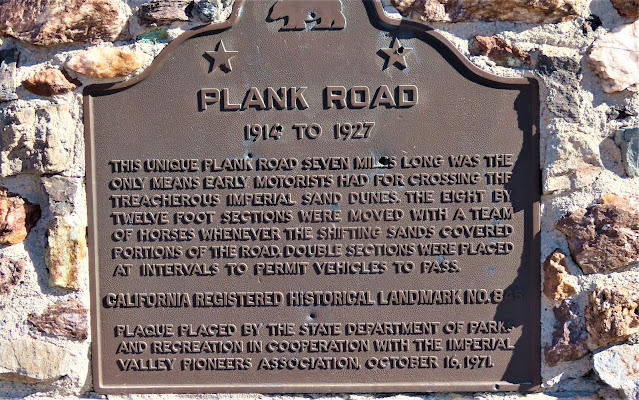 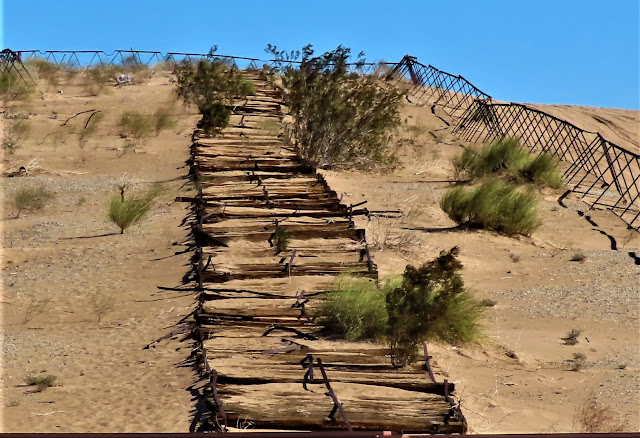 The Plank Road is only about a quarter of a mile from the wall, so we drove the Jeep through the sand to get a closer view. 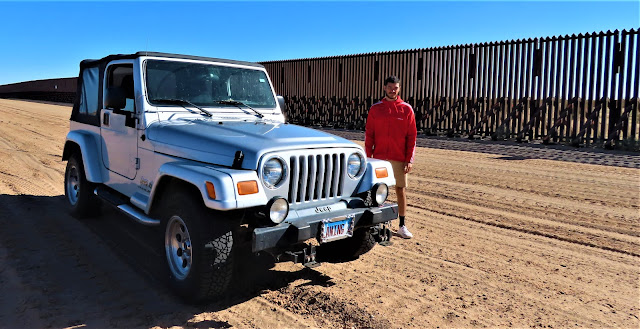 Then Nick got a real close view.  Can you read the sign? 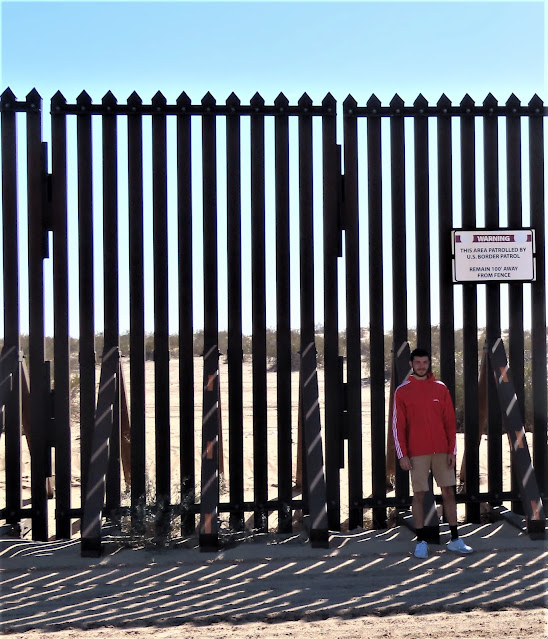 After leaving the area and heading back to I-8 I said to Nick that we should visit Glamis, California.  I thought it was about 10 miles further west, but when I checked the map I found it was 43 miles away and north of us in the Dunes.  We had to take a round about way to get there because there are no roads going north and south through the dunes.
AS we neared Glamis, we were driving through some large dunes and mad a quick stop at a view point on top of one. 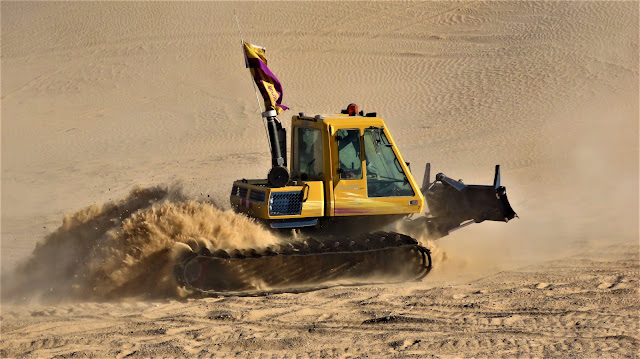 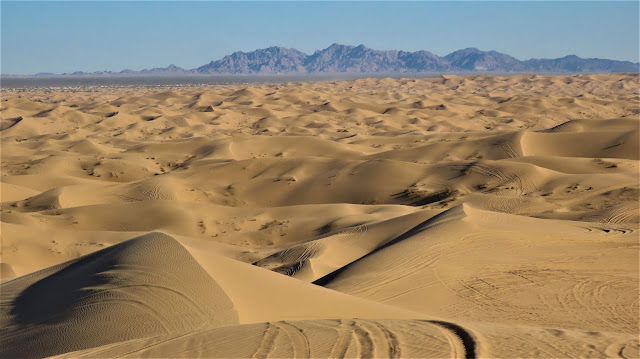 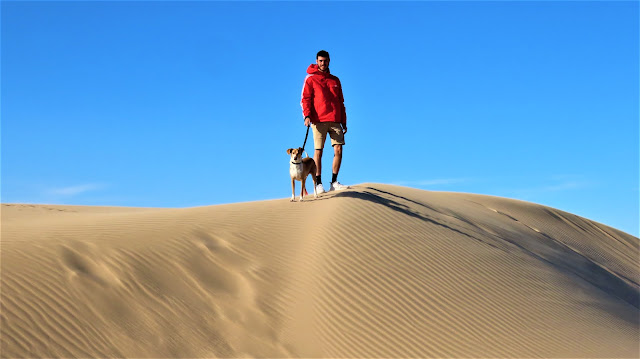 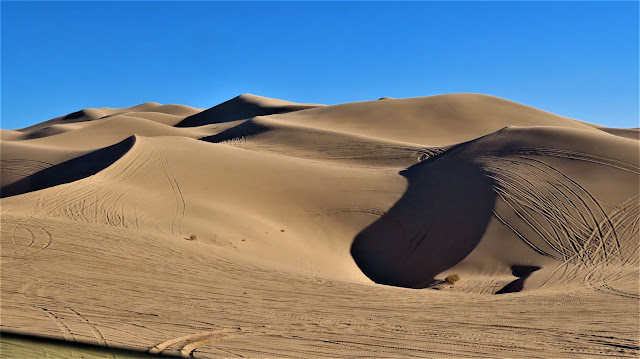 We reached Glamis and this place was packed with everything that moves in the sand and so many young people enjoying the New Year! 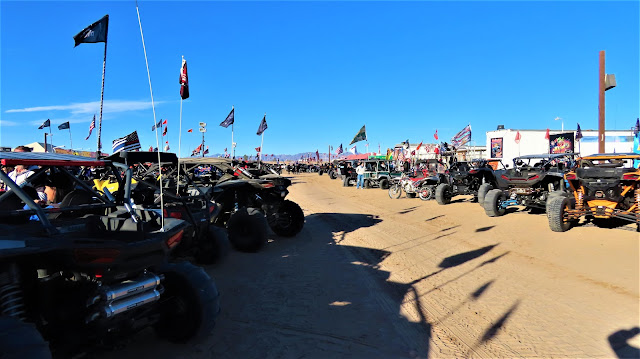 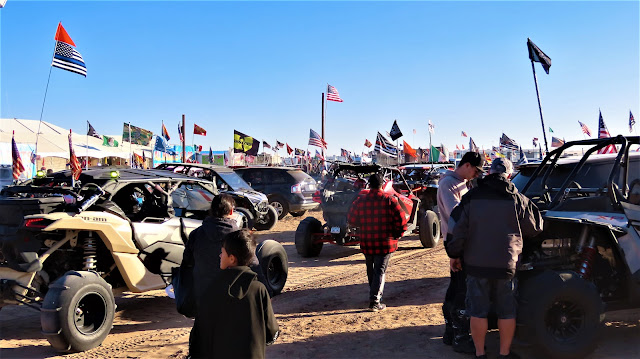 These folks out west know how to have a great time!  After browsing the tents for awhile and people watching it was time for the 40 minute ride home.
We got home right at 4:30 and we had no more than gotten in the door before Yuma was barking to go to Happy Hour at the tent.  Yuma gets so many snacks at Happy Hour he knows when it's time 😀
As usual, we forgot to put anything out for dinner, so tonight it was hotdogs and ham sandwiches.  Right after this blog I am going to have dessert and then off to bed.  Long day but a fun one in the sun.
Thanks for stopping by.
Posted by Doug Laning at 10:36 PM