No games but more repairs

Didn't sleep well last night thinking of projects that need immediate attention on the White Lion.  Got up a little after nine.  I usually get my best sleep from 6 to 9 in the morning.

Took Yuma for his walk.  It is bright and sunny with a high of around 70 today and very little wind.  Perfect day ahead.

The plan was for Nick to go into town and watch football after breakfast while I stayed home with Yuma and investigated the leaking air bags.  The games didn't start till 1 o'clock so I decided to run into town to find a hose clamp I needed for an idea I had for fixing the air leak.

It was 1 o'clock before I returned so Nick decided to just help me with my fix it or break it project.  I say that because I have no idea what I'm doing 😀  I was worried about driving 20 miles to Quartzsite with no air in my rear airbags, so wanted to assess the situation more closely before doing that. 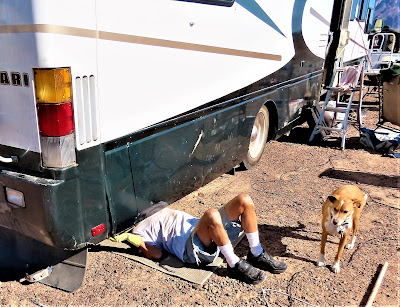 I climbed under the MH at the location of the air tank and as I was looking, I could see there was a problem I hadn't seen before.

When I backed into the dirt mound on the other side of the road I had pushed the rock guard into a large expandable air pipe similar to the exhaust pipe used for a clothes dryer except much larger.  That pushed into the back of the air tank that raises the MH to driving height.

I used the Jeep with a rope to pull the metal bar holding the rock guard out to its original position and then I could move the air pipe away from the air tank.  And what did I find back there?

An air valve on the rear of the air tank that was being pressed and letting air escape from the system.  No damage.  Once the air pipe was no longer putting pressure on the valve no air leaked.  No real damage and an easy no parts required fix 😀😀😀

It was now after 3 o'clock so Nick decided to just stay home and keep up with the scores, so we laid out in the sun and just boondocked 😃

Before dark I wanted to accomplish one last small project.  I wanted to strengthen the flag/antenna pole so it wouldn't sway so much in the wind.  Had the PCV piping on hand so Nick and I tackled that simple project quickly.

Before fixing dinner I had some questions about my solar power setup so called my son Jim, the solar man and had a chat.

Unfortunately I'm kind of dense so we were on the phone for a good hour before I could understand a little more of how electricity runs in a motorhome with generators, engines and solar panels all making and delivering power.  Very complicated to me 😬

Finally got dinner done about 9 o'clock and it was cheeseburgers again.  I was too tired to cook a big dinner.  Tomorrow night for sure 😋  Got to get done here and hit the sack.  Almost 11 o'clock and it has been a very tiring day!