Yuma drug me out of bed at 7:30 this morning wanting to go for a walk.  And that’s what we did.   Sun starting to peak out over the mountains in the distance.

Looks like a fueling jet coming in for a landing nearby. 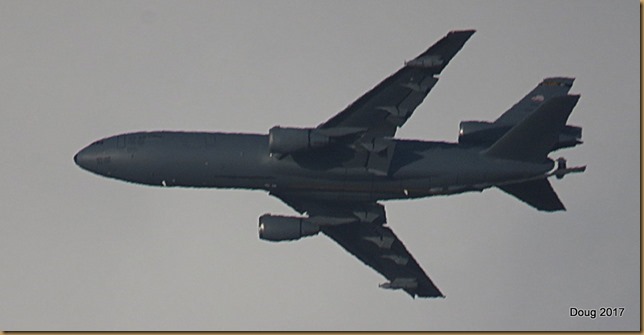 Afterwards, as I sat and drank my coffee, I was wondering what to do today.  Looks like the weather is going to be great, so can’t stay inside.

About 10, I could hear it raining outside, so I opened the door to take a look and saw the prettiest rainbow off in the west over the lake.

Around 11:30, after eating breakfast, I packed up the Jeep with water, snacks, camera and in we jumped to head out towards Castle Dome Peak about 25 miles north of here.  I’m sure I have taken a number of photos of it.

Put the key in the ignition and all I got was a grinding noise.  Did this a few times, then opened the hood and looked around and saw nothing out of place, so tried it again.  Grinnnnnd!  Now what?  I’m no mechanic.

Checked to see if the battery was dead.  Nope.  Plenty of juice in the battery.  Decided, since we had a little rain that maybe the terminals on the battery needed to be sanded to improve the connection.

You can see the crack in the circle at the bottom left and upper right.  Wouldn’t clamp tight with those breaks.  The small bolt at the bottom is the culprit that will give me problems all day long.  That bolt holds the battery cable to the clamp. 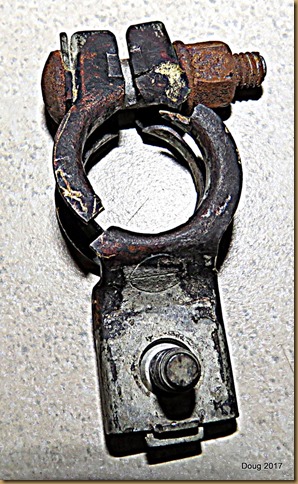 Oh, how lucky!  A simple fix and we would be back on schedule.  I wedged it back on and got a good connection and the Jeep started right up.  That’s great!.  Now I know this isn’t a permanent fix and I want to replace it now.  Wouldn’t want to be in the middle of nowhere and have the thing completely disintegrate and fall off while I was bumping down the road.

I don’t happen to have a battery terminal clamp at the MH, so, a quick drive to the nearest auto parts store to buy one and quickly replace the old one.  So, we jumped into the packed Jeep and headed into Yuma.  Fifteen miles out of my way, but that’s how it is when you are in the boondocks.

The nearest one was AutoZone.  Nice big chain store and they would surely have my replacement part.  I looked at all their terminal clamps and could not for the life of me find one with the small bolt on the end I needed.  Without a small size, I could not got the eye on the battery cable to fit on the clamp.

Decided to keep hunting, so I went to O’Reilly, TCS, Walmart Auto Center, Battery System - The Single Source Solution, and finally I was all the way into downtown Yuma at the NAPA store.  By this time it was after two in the afternoon and I was tired.  I got the same runaround there as all the other places.  “We only have one standard size and we can’t help you.”

As I was leaving, I saw a Golf Cart Sales and Repair shop just down the street.  I think I saw the kid waving a sign first. 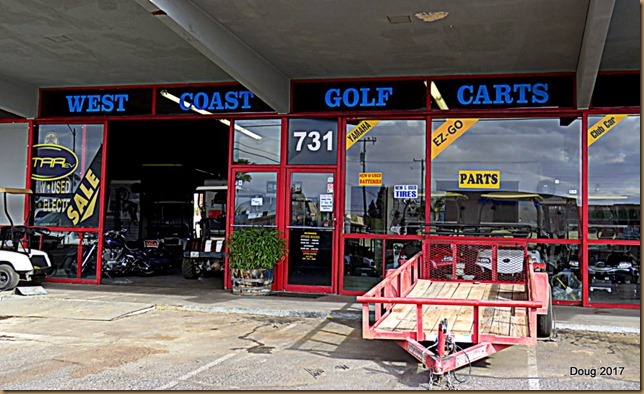 Certainly, since golf carts use batteries, they could help me.  Stopped, and went inside and talked to this young kid.  He came out and looked at the battery clamp on the Jeep.  First person that would take the time to look at it.

He went back into the shop and couldn’t find the right size, but did get close.  I asked if he had a drill with a bit to make the eye on the battery cable larger, so we could make it fit.

Of course, he had a drill.  He grabbed it and the bit we needed and while I held the battery cable with plyers, he ran the diamond tip bit right through the eye, thus solving my problem.  Tightened the clamp on the battery and the bolt into the eye of the battery cable and we had a permanent fix that will last forever.

All it took was for someone to take the time to help, instead of just trying to sell me something.  Paid for the clamp and gave the guy $10 for taking a few minutes out of his day to help.

By this time, it was 3:30 and too late to go anywhere but back to the RV and call it a day.  Not the day I planned to have, but I’m glad things didn’t go really bad fifteen miles from nowhere without tools to fix anything.  So, I would call it a good day after all.

As we were driving to camp, I saw this huge bird flying and landed on a electrical pole ahead.  Turned out to be a large Osprey, also known as a fish hawk, with a catfish in its claw.  What a large and magnificent bird! 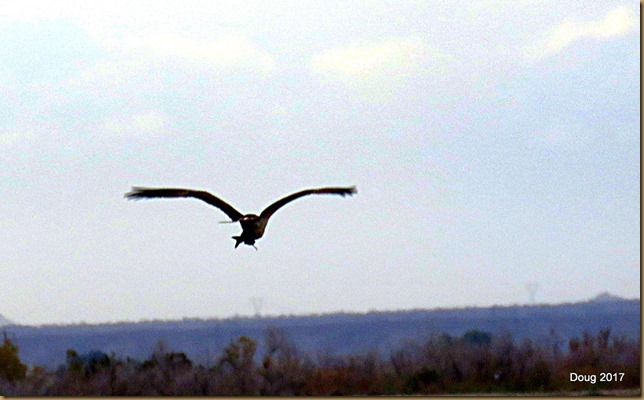 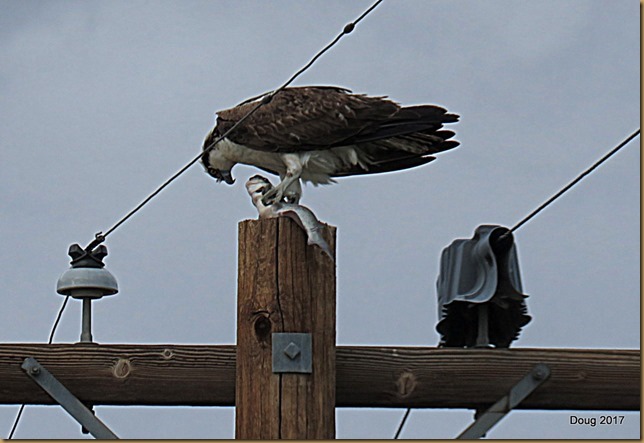 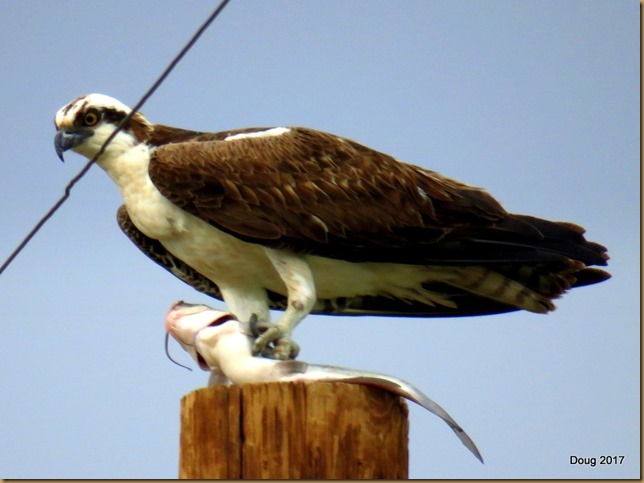 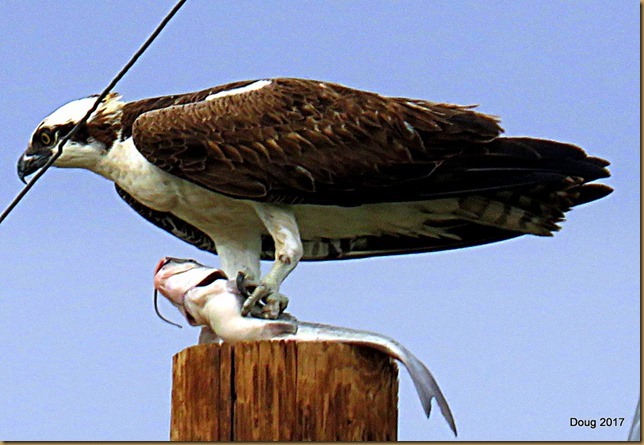 Just as we got back to camp, the wind picked up and clouds came in from the west.  The temperature dropped and I knew it was time to call it a day. 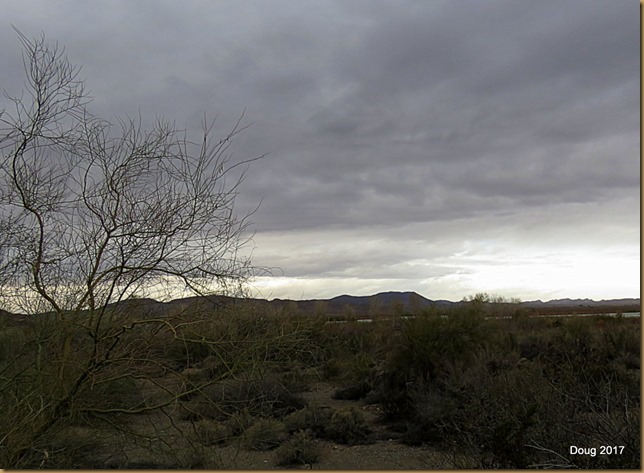