One of the questions I asked Al yesterday was, did he have Spell Check on his Open Live Writer?  His answer was “Yes”.  This morning, I did a check on the internet and found the newest version and downloaded it.  Now I have Spell Check and no longer an excuse to misspell words.  Thanks Al.

Forgot to mention, yesterday afternoon I heard a crash and went to investigate and found the bedroom cabinet door panel had crashed to the floor.  Yuma and I jumped in the Jeep and went back into town and bought some wood Gorilla Glue.  In just ten minutes, the job was done and screwed back on the cabinet. 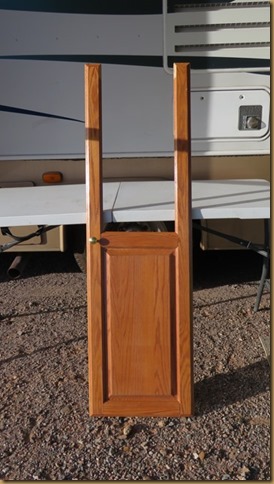 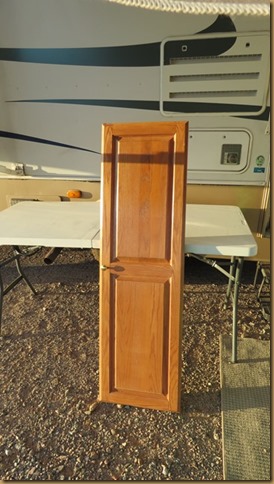 This morning, it was cloudy and the forecast says it will be this way all day.  Thank goodness, it will be warm.

Yuma and I didn’t go anywhere all day.  Just laid around camp and took walks around the area.  Also, I took some photos, of course.

As we walked down by the large wash South of camp, we came upon an area with tables and large barrels and a grill.  Not sure what this was used for, but based on the area, it could handle a large group of party goers. 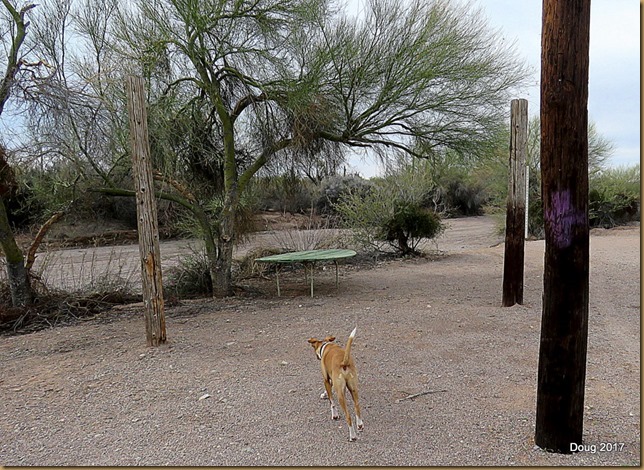 Saw this white stuff in the distance and when I came up to it, there were white painted rocks with a metal stake in the middle.  The top of the stake had coordinates on it.  I’m assuming this is someone’s claim they have staked out. 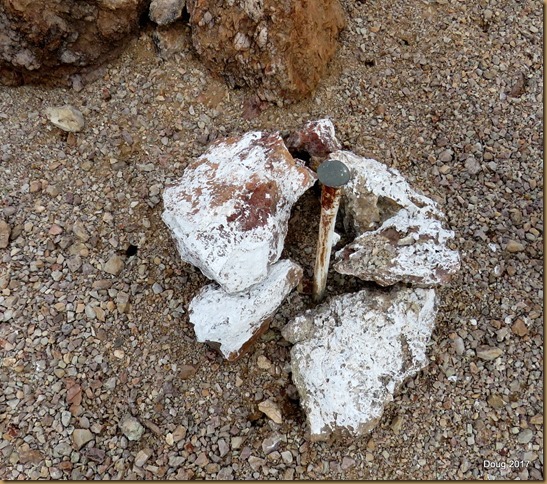 Yuma and I just followed one small wash after another through the desert.  They make good walking paths, because they are soft with no brush.

On the right, this is what a Saguaro cactus looks like in its final days before completely disintegrating. 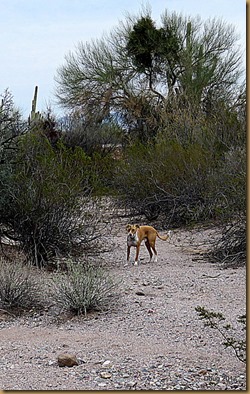 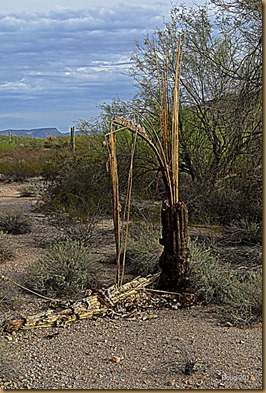 Now, these guys Yuma and I have to watch out for.  These are Cholla Cactus and they have the sharpest needles of all the cactus out here.  Also, they drop fingers all over the ground, making it dangerous for Yuma to even walk near them.  Unfortunately, the desert is littered with human trash. 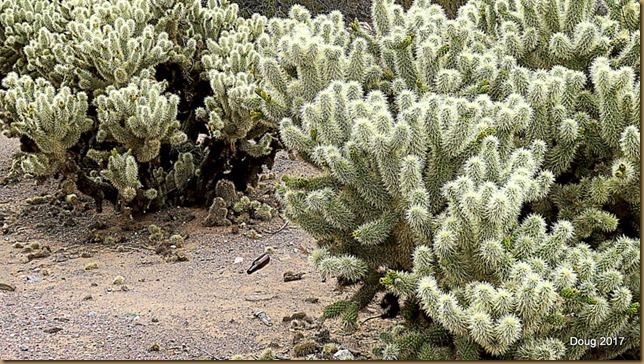 Later in the afternoon, the sun tried to peek through the clouds.  Yuma and I walked North across Darby Well road to the edge of the old Ajo open pit copper mine.  The large line of rock, sand and dirt surrounds the pit.  All of it came from the pit.  It is on the other side of those piles.  You can read about the New Cornelia mine on the Internet. 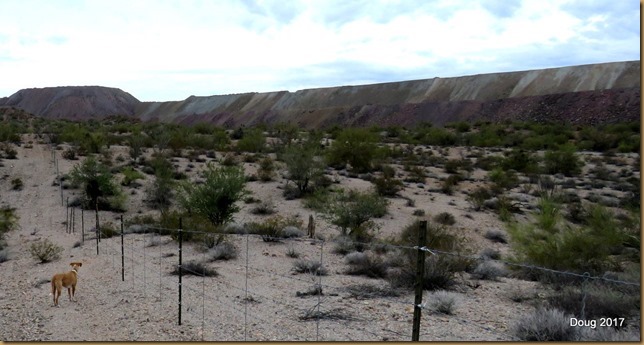 You can’t just walk up the piles and look over into the pit because it is private property and has a fence all the way around it with signs. 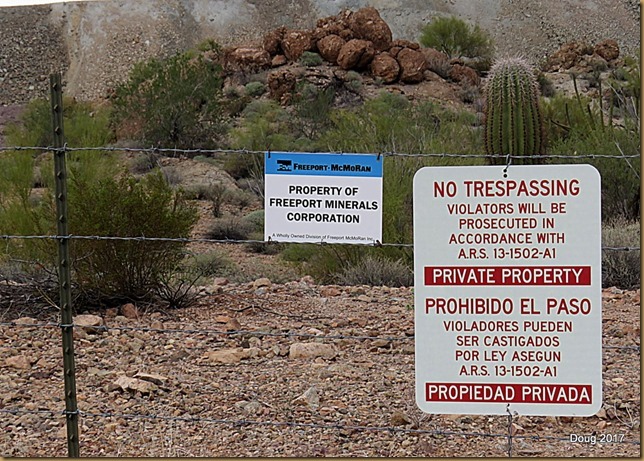 I’m not ready to go to jail, but Yuma goes in and out of the fence with no fear.

Way off in the distance I spotted a Border Patrol truck.  They are everywhere, looking to find illegal aliens trying to get into the country.  Their white and green trucks are everywhere and the most common vehicle seen in this area.  I’m sure he knows I am walking in the rocks above him.  They are very observant. 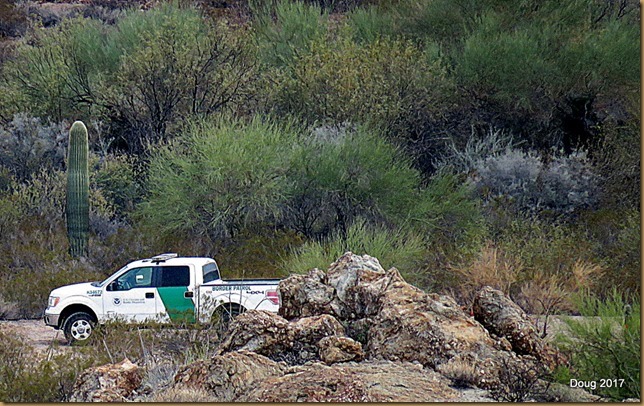 I was standing on that rock formation on the left, when I spotted the Border Patrol truck some distance away.

Down on the desert floor, walking South back towards camp below Black Mountain.

Looking back on the rocks I was standing on. 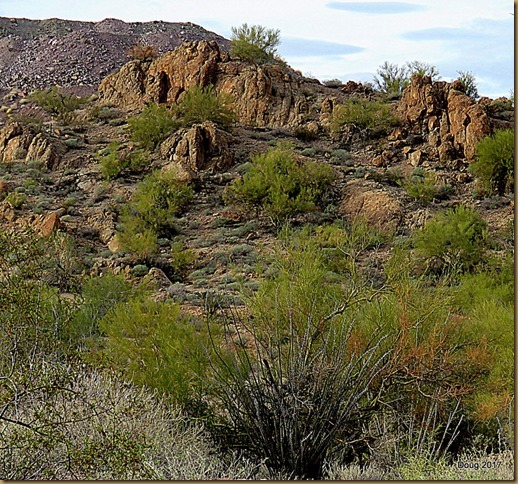 Dinner and a beautiful sunset round out our lazy day.  Walked over four miles today.  Not bad exercise.