This morning after the sun was up and we had breakfast, I decided to walk down to the next RV.  Actually, it is a fifth wheel.  A couple had stopped by yesterday and mentioned they were a young couple making a living full-time on the road.  They have a website, Love your RV.  Curious, I wanted to meet and talk with them about how they were doing.

As I was walking down I noticed two vehicles and a tent between my place and the 5th wheel.  Wasn’t there last night, so I guess they just moved in.  Yuma quickly noticed they had dogs, so I said hello and we stopped for a chat.  They had three dogs, two were older and the third was a two year old male Malamute/German Shepard mix.

Yuma and Phoenix (their dog’s name) wanted to run and play so bad, but both were on leashes and we kept it that way not knowing how long the friendship might last.  Yuma is handsome, but I must say Phoenix had beautiful form and coloring.  He had black longer hair, but underneath it was brown similar to Yuma’s color.   Very intelligent and playful. 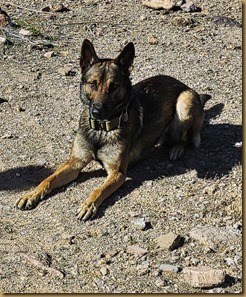 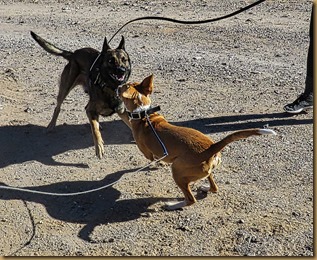 They were just setting up their tent so didn’t stay long.  I walked down the road a little further and could see the truck was gone at the 5th wheel, so Yuma and I walked back towards our MH.  As we passed, Yuma stopped and would not go any further.  He wanted to play so bad but they couldn’t because Phoenix’s masters were busy.

About noon, the weather was so beautiful, and my feet and legs were feeling better, we decided on a short hike.  I can tell you it was a mile up and a mile back which is about right it seems.

I have been staring at this leaning tower for a week now and just had to know what was on the other side. 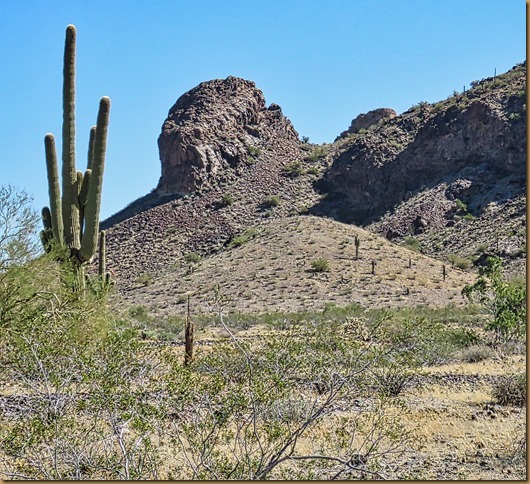 So we got prepared and started up the road towards the leaning tower of rock.  Of course, the road doesn’t go there, but it was a good start. 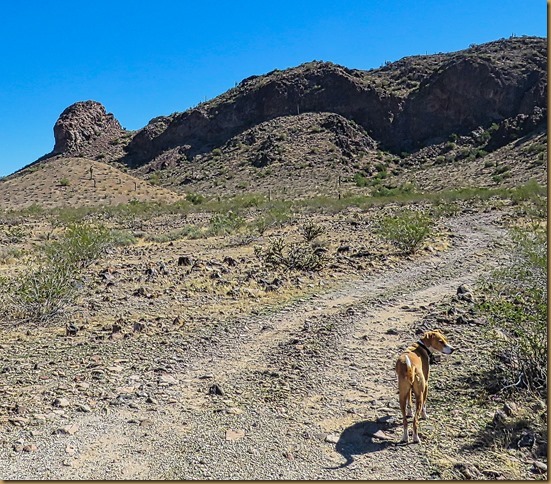 Sure looks easy as I zoom in on my destination. 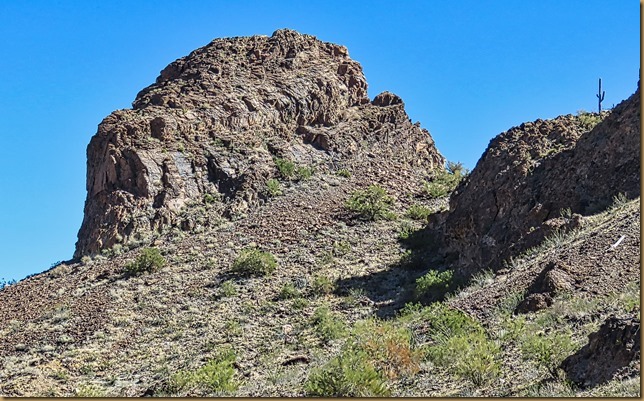 Looking back.  You can see my MH on the right center. 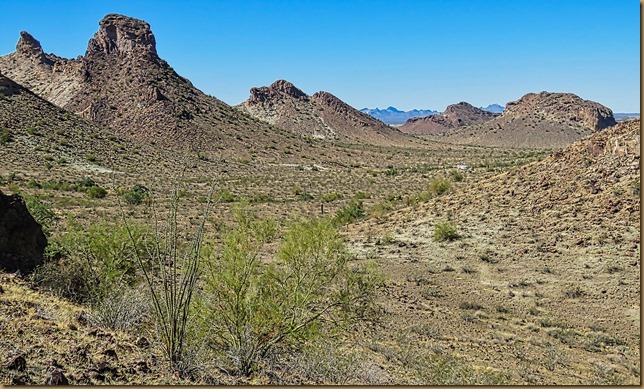 I’m much slower than Yuma so he has to sternly watch me to make sure I’m still coming along.  Notice how big the boulders are.  From the first picture looking up, it looks like a cake walk.  But looks from a mile away are deceiving. 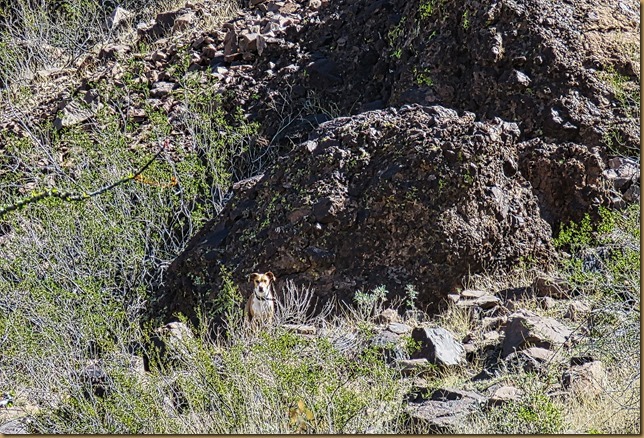 I’m up against the wall looking back.  I’m following a sheep path.  Much easier when I can distinguish a path.  Those big horn sheep know the best way to navigate the mountains. 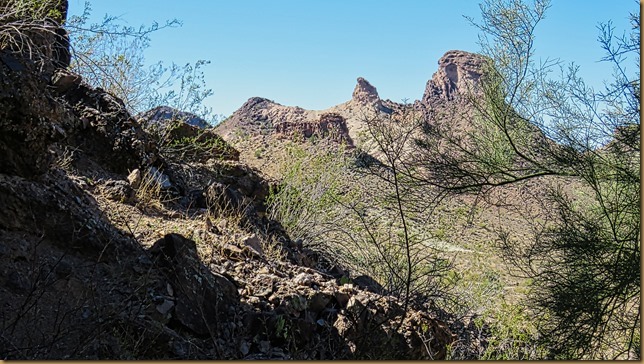 Getting close to the top now.  Just got to keep climbing these boulders.  The bigger ones, I go around. 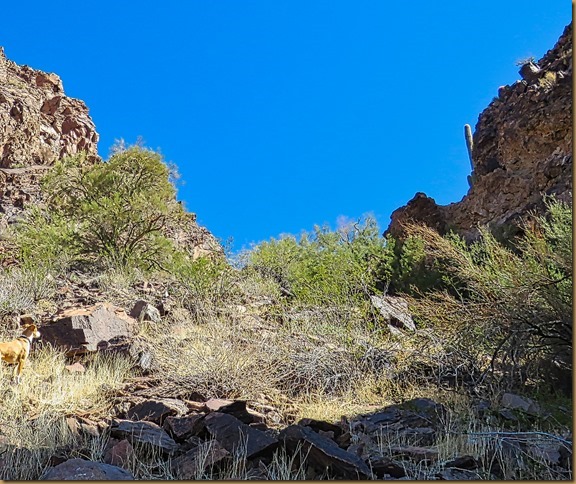 We’re at the saddle and I’m yelling at Yuma to stop because I have no idea what is just over that edge.  Could be a sheer drop-off.  It was a drop-off, but not sheer.  More than I could handle, but Yuma would probably make it being four legged. 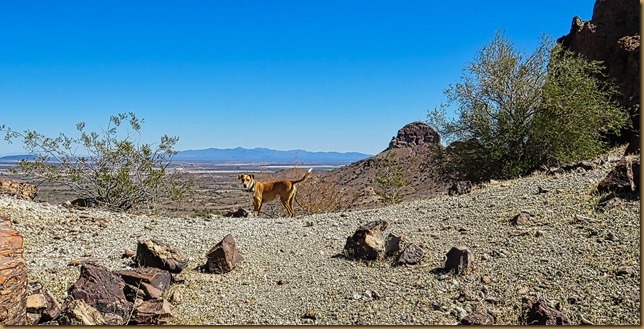 Standing in the saddle, me and Yuma are looking up at the leaning tower of rocks.  He’s ready to go on up, me not so much. 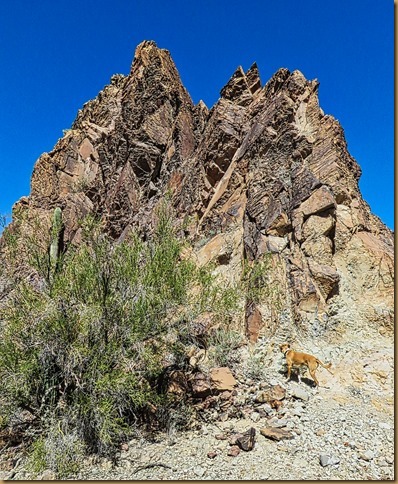 Looking back across the valley.  My MH is in the second line of green, center right.  Over the top of that hill of boulders and rocks.  The camera doesn't’ convey how steep the terrain really is.   I do a lot of three touch scrambling when going down.  It hurts to fall and I try not to do any more than I have to. 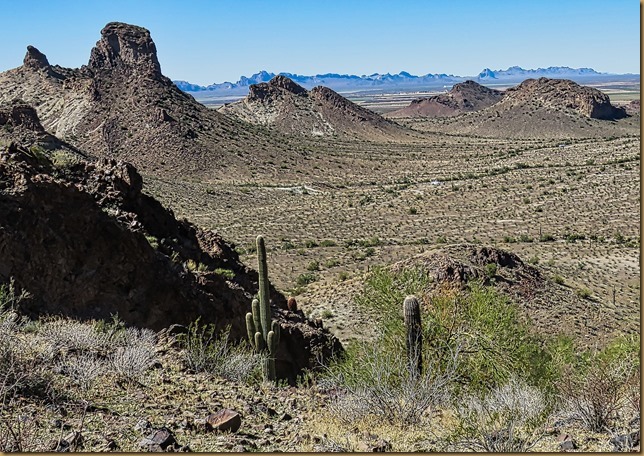 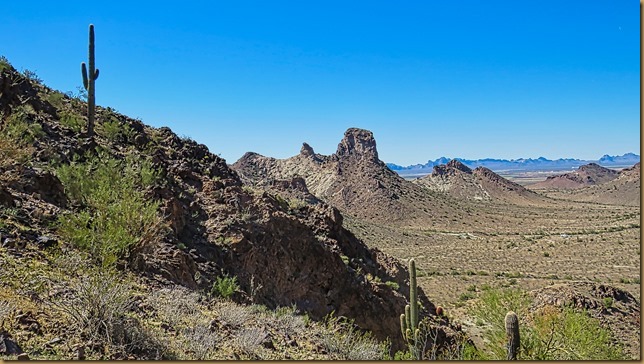 That MH is below on the other side of the saddle.  Quite steep 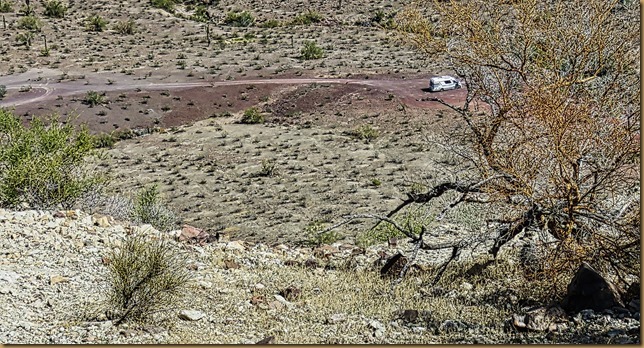 Yuma heard gunfire way across the valley.  That’s his sitting stance when he is concerned or frightened.  I was hoping I wouldn’t have to carry or pull him down the mountain. 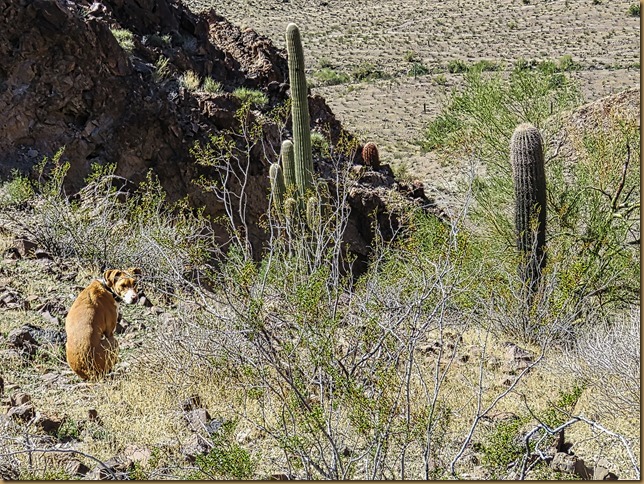 Looking east across the way on the other side of the saddle.  Pretty over there too. 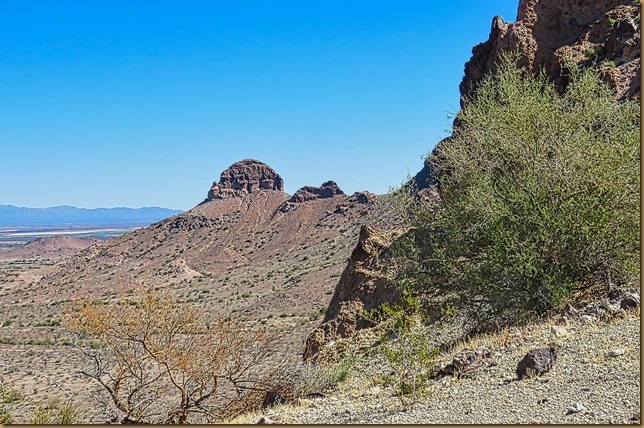 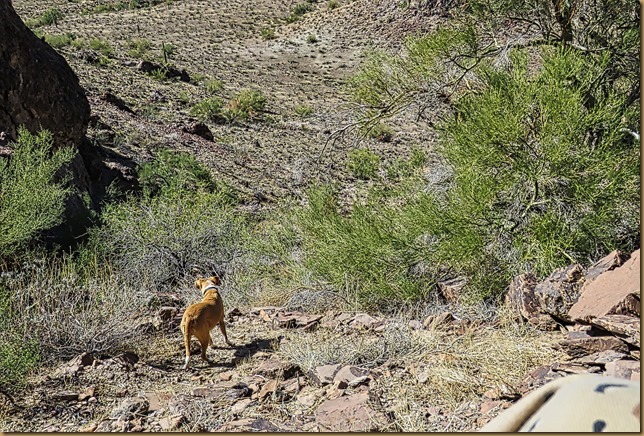 Looking west across our valley again.  More beautiful I think. 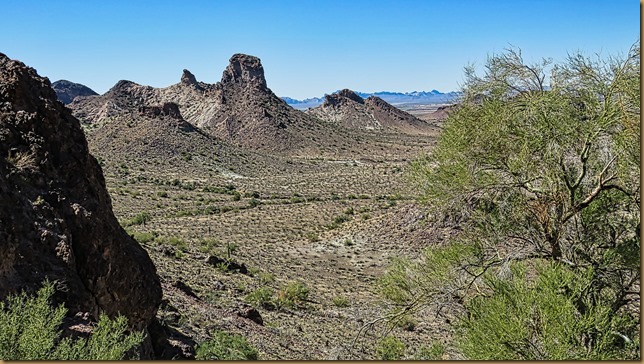 Not going to show the downward hike, but we made it with no problems.  Got back to the RV and had lunch.  Then we sat outside all afternoon.  It is just beautiful today.  Bright sunshine!  Cool in the shade and perfect in the sunshine.  Hardly any wind.

This beautiful day is fading away.  Those Saguaros have been standing guard for many many years. 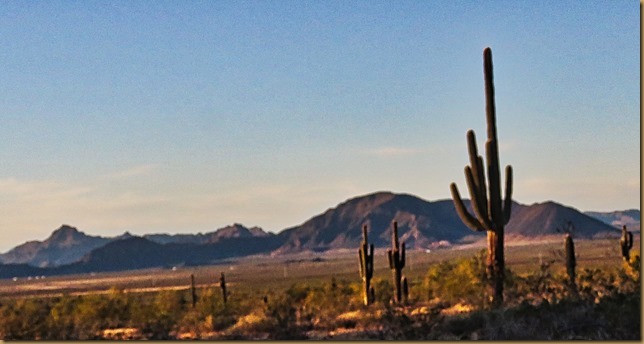 The sun is shooting its last rays down upon our MH. 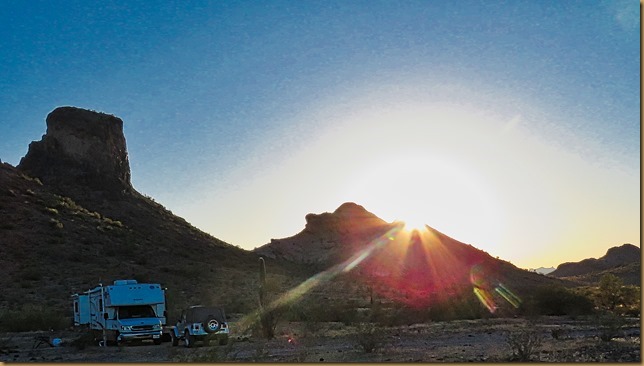 I-10 traffic is relentless.  Never rests.