It was about 9 o’clock this morning when I said goodbye to Saddle Mountain and headed into Tonopah to meet up with Deb and Riley of On a long and lonesome highway….  .  Deb had the address of the Walmart in Apache Junction saved in her GPS so she led the way and I followed.

Off to my right just past Saddle Mountain is the Palo Verde Nuclear Power plant blowing off a little steam.  I hope.

Stopped at Love’s on I-10 in Buckeye and dumped tanks and took on water.  I drove to a service station just down the road to take on propane because they didn’t have it at Love’s.

The trip went without incident.  Only  around 100 miles but we had to drive through all the cities surrounding Phoenix.  The traffic was heavy but no delays.  Deb and Riley did an excellent job taking the lead.  All I had to do was follow the Igloo!

I believe this is the Papago Freeway tunnel on I-10 in Phoenix.  Had my sunglasses on and had to take them off.  There wasn’t enough light for me to see with them on.

Closing in on the Walmart store in Apache Junction.  Those are the Superstition Mountains overlooking the city.

When we reached Walmart, I had to buy a month’s worth of groceries.  I was out of everything.  Even picked up a prescription.

Glad this wasn’t us in the Walmart parking lot.

About an hour after Walmart, we were ready to find the GPS coordinates that Lorne of A Place Called “Away” gave us.   He was right on the money with his coordinates.  Thanks Lorne!

Unfortunately, there were quite a few boondockers off Hackamore Road.  Lorne had said the road was terrible and filled with big dips and potholes.  He was NOT kidding!  Deb stopped a little ways in and I said I would go on ahead and scout out the lay of the land.  It would be much easier for me to unhook the Jeep and turn around in a tight spot than Deb with her 5th wheel.

Passed by the place Lorne and his friends stayed and almost at the dead end, I found a place we could fit into with breathing room and it was flat.  I texted Deb and said, “Come on up, but go real slow!”.

Once into place, Deb and Riley had an excellent spread for lunch.  I ate like a King.  Thanks mainly to Riley’s great salads.  Yuma was just too excited, so he had to have his lunch in the RV.  Poor guy!

We sat outside after our lunch/dinner and talked till the cool of the evening drove us to our homes for the night.  This is our view as we sat outside the Igloo having our lunch. 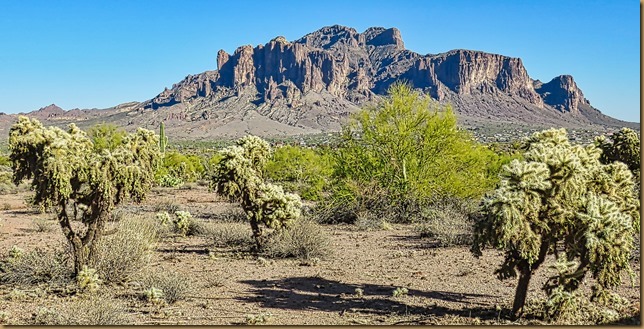 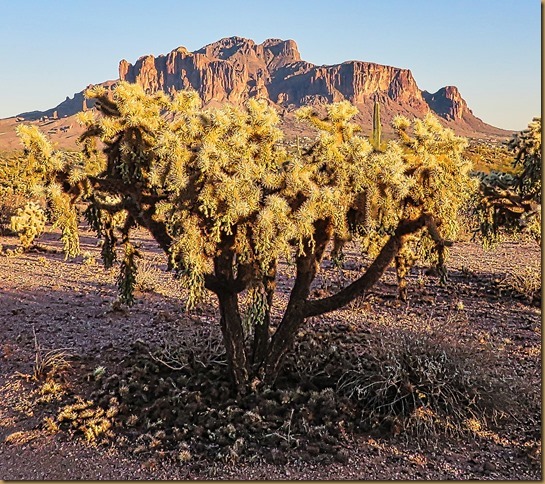 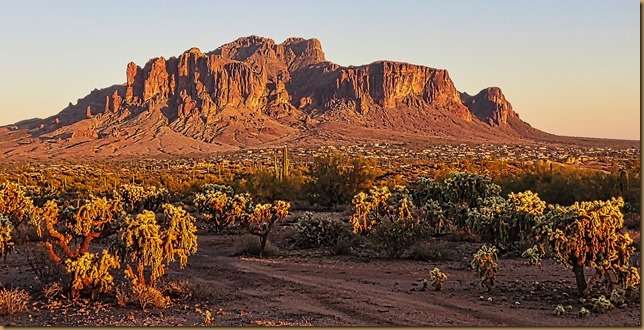 I am as tired tonight as if I had hiked four miles.  Must be the tension of driving in heavy traffic and then having to shop for a month’s groceries.