The only good thing about yesterday was the Happy Hour with friends.  All before was very disappointing and aggravating.  So bad, I wasn't ready to speak of it for fear I may say something I regret!

Woke up yesterday morning real early because I couldn't sleep I was so excited.  At my age it's hard to get excited about anything.  Ate a little something, left poor Yuma in the MH and headed into RV Lifestyles on this side of Quartzsite to test drive the White Lion.  I had talked to Kenny yesterday and he said he would have it ready to roll at 9 o'clock for our test drive.  Never driven a huge Class A diesel motorhome before but I'm ready.

Got there about 15 minutes early and I see a big deisel truck at the back of it with a tail sticking out.  Only, it wasn't a tail, it was cables hooked up to the White Lion's batteries.  Not good!  They had all day yesterday and they never even started it.

I don't want to get into a rant.  That's why I waited a day.  But!!  Evidently, Kenny waited till this morning when he came in to even try this small task.

After two hours and having three guys looking at it and switching stuff, they finally decided the two starting batteries were dead as in dead.  Would not hold a charge, much less start a 330 Cat engine with a button.

Oh No!  This may turn into a blabberfingers rant if I don't calm down.  I'm taking a breath now.  They finally decided someone was going to have to bite the bullet and put two new batteries in it.  Of course, being tent week, they have more business than manpower to do it.

I told Kenny, I was heading home and to call me when they were ready for me to test drive this monster.  Yuma was very glad to see me after about three hours of disappointment.

Yuma and I sat outside and took in a little sun while waiting for a phone call that never came.  Yuma and I packed up everything and moved closer into town, but still on the west side behind a mountain.  Thought that would be quieter and it was.  So, at 2:30 we headed to the Happy Hour and after a huge glass of tea I calmed down.

Got home a little after six and we had a nice dinner and when I tried to get on the internet to use Blogger, it would not connect.  Said NO INTERNET!  What a perfect way to end the day.

I had to drive back out to where I had stayed the previous night and sit in the Jeep in the dark typing my post.  No way was I going to write about my day or I would explode.  Only a few miles but what a hassle.  Shoulda just skipped the post for the night.

Now to today.  I guess my rendition of yesterday wasn't as bad as it could have been.  Read through it and not one cuss word!

I won't lie.  I have some anxiety pills that I haven't taken in awhile, but last night I did.  I slept like a rock and didn't wake up till after 8 o'clock.  That was great!  So relaxed that I didn't care if Kenny called or not.  There are tons of motorhomes for sale and I'm not going to beg Kenny to sell me this one.

Around noon, Yuma and I headed in to do my annual walk through the Big Tent.  Since I still had not heard from Kenny, I stopped in the store because it was on my way into town.  Thought maybe Kenny had died overnight or something.  Nope there he sat at his desk.  He looked up and said "Hi Doug.  At least he remembered me, that's good.

Glad I took that pill, because I asked how were things going and he quickly said he felt bad that everything went to hell in a hand basket yesterday.  His words not mine.  I immediately softened a little and we started talking.

Poor Kenny was still waiting for someone to put those two batteries in but they just hadn't had time to squeeze him in to the hectic schedule.  I could tell he was frustrated.

I guess being the week of the huge RV show and Big Tent, they were overwhelmed with the work to do.  After talking, I said that Yuma and I were going to the Big Tent and I will just wait till he calls.  I really don't have anything on my schedule so what if this thing doesn't happen till Monday.  No big deal, I'm not going anywhere anyway.

We hit the Big Tent! 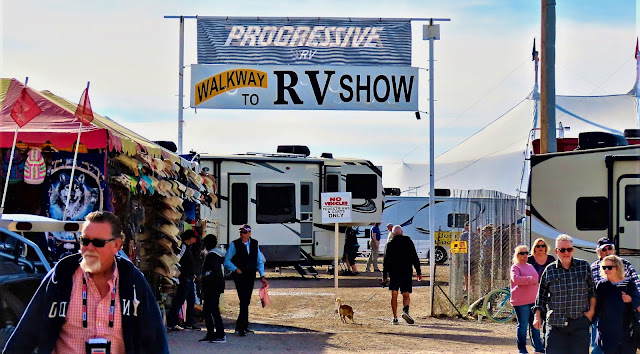 There were tons of dogs there and Yuma said hi to many of them. 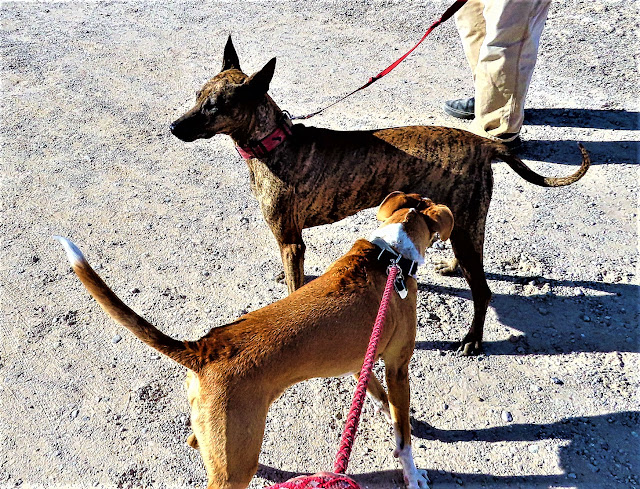 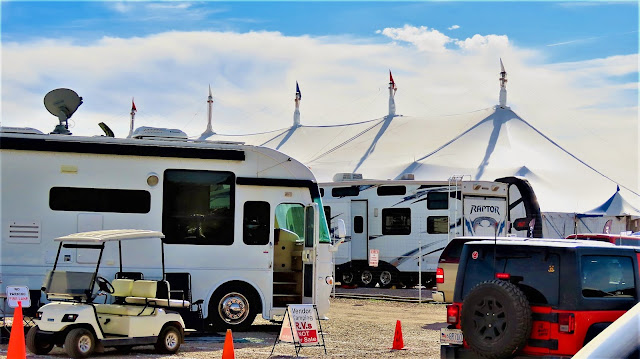 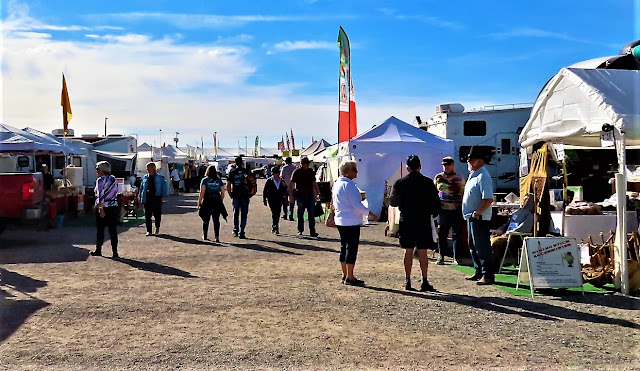 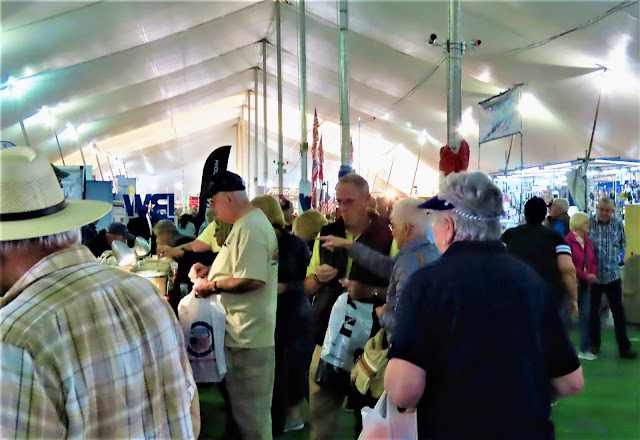 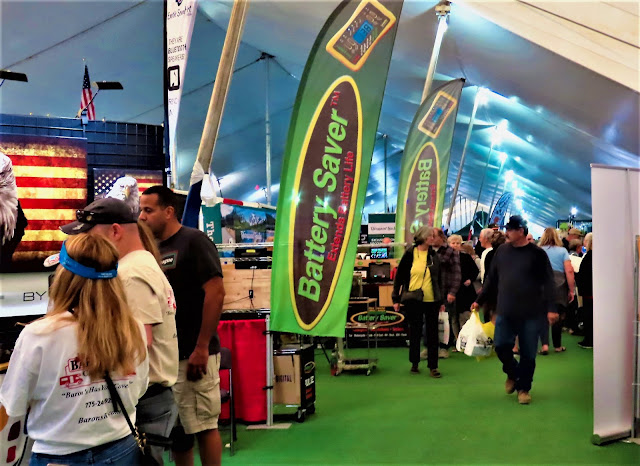 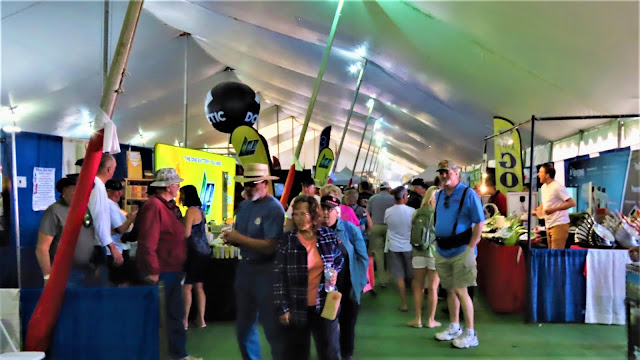 Always exciting and fun for a one time thing.  Yuma got lots of pets, mostly from sales people trying to get me to stop and buy.  I did buy one thing.  I had broken my coffee mug the other day and so I picked one up while in there.  First time I ever bought anything in there.

When I stepped into the sunlight at the west end I could see Q Mountain.

Hope he got a good deal on these metal sculptures. 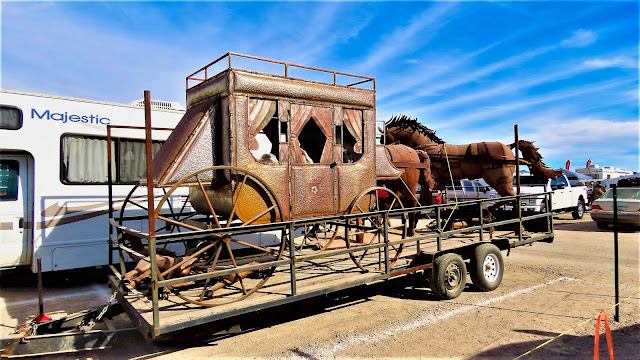 Wasn't long before we hit the road to home so we could move for the third day in a row.  I'm getting good at this moving thing.  As we were driving around looking for a place with Internet, we stopped for a picture.

"Is that a new hat, Doug?" you ask.  "Yes, it is!"  While walking around the vendor booths outside the tent I saw this beautiful brown leather hat with white cowhideand hair on the sides.  It was perfect for me.  I had forgotten my hat and this is just what I needed.  See how beautiful it is and it matches Yuma too!  All good reasons to spend all that money for a hat. 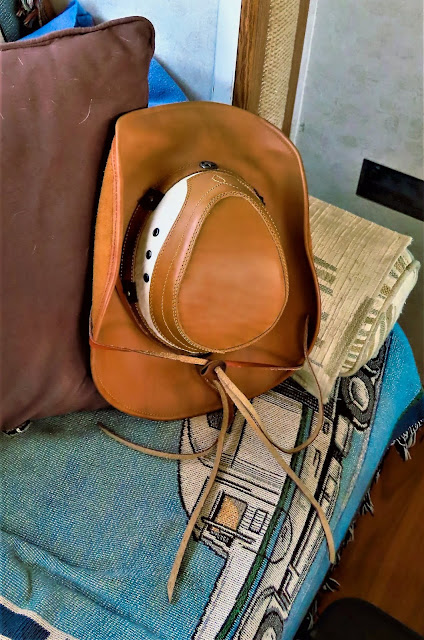 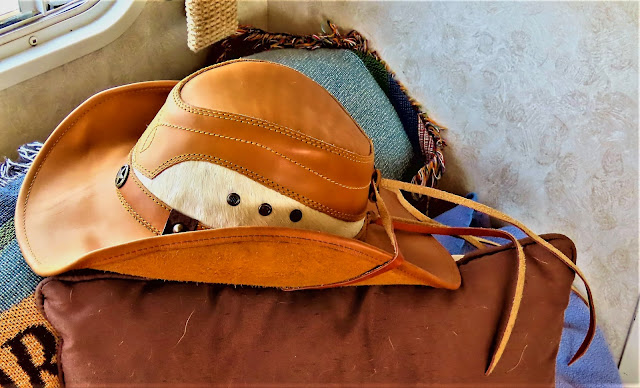 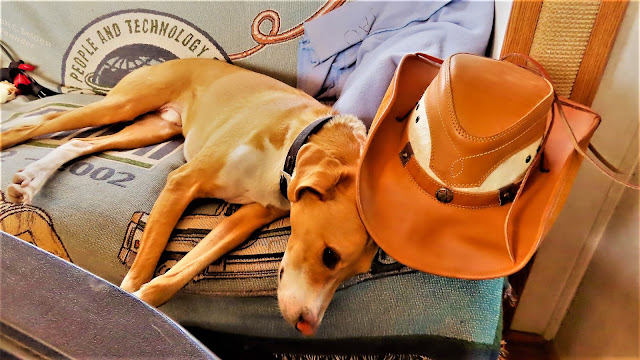 After we got back to the MH and still no call from Kenny, we decided to move for some Internet.  Just couldn't decide so as I was driving West out of town I passed the same site I was in two night's ago and it was vacant.  So here we are right back where we started from.