This morning I again woke with the sun around 7 o'clock.  It's already warming up to near 50 and it's going to be another georgeous day with temperatures in the 70's.  Don't you just love it?

Took Yuma for his early morning walk and then my normal breakfast with cereal this morning.  I've had so many readers sending in comments asking how I made hot coffee and ten Ritz crackers with peanut butter and cheese, I thought I would just show you.
We are staying in an area that is very popular on the weekends.  These desert rats have been running around the hills and having a grand time!  Interesting to watch. 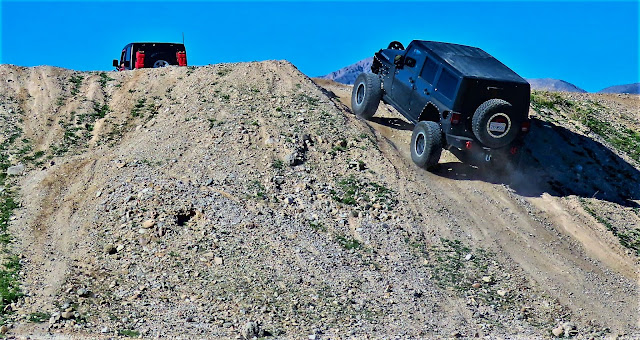 There are hundreds of them all around the Badlands. Must be a very popular recreation in Southern California.  Some of them are big buck machines not counting the motorhomes they drive here in to stay the weekend.  Just found out it's a three day weekend with a holiday on Monday.  Wonderful!

This gave me a good excuse to drive the 30 miles into one of my favorite towns, so I didn't mind.  I have nothing better to do today anyway.  Lots of stuff to see.

The drive into Borrego Springs on S22 is just beautiful.  The town is completely surrounded by the Anza-Borrego Desert State Park.  If you ever have the opportunity be sure to come here.  You can spend weeks in this area and not see everything.


I had just gotten my three washers going and stepped outside when I heard sirens and a fire truck zoomed by heading West towards the mountains.  I had my camera and ran to the curb to see where he was heading when I saw it. 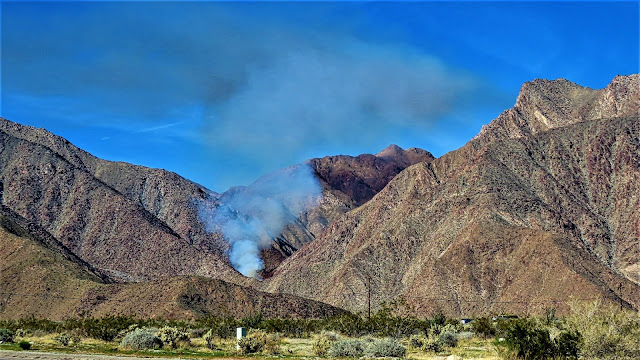 There was smoke in Palm Canyon.  Not long after the first siren, a second went by, but this time it was an ambulance.  All the time I was washing there was commotion.  A helicopter flew over there and landed.  Soon, it took off again.  I wonder if I'll ever find out what happened.

As I was waiting for the laundry to do it's thing, Yuma and I walked around the hotel complex.  It is set-up like a western town.  Pretty neat and makes for wonderful pictures. 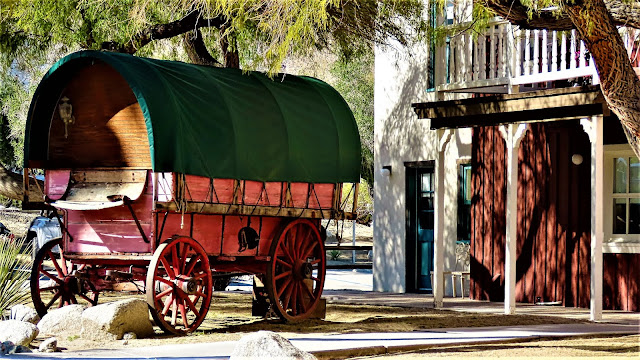 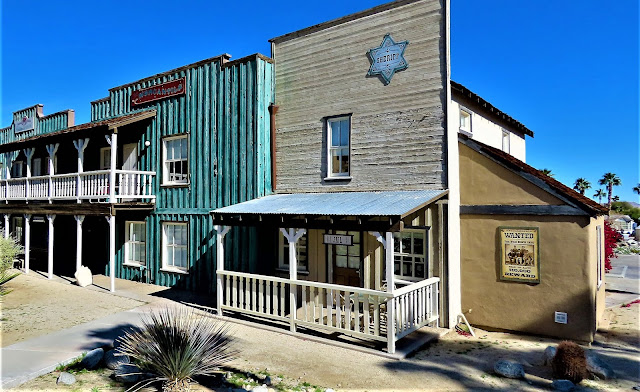 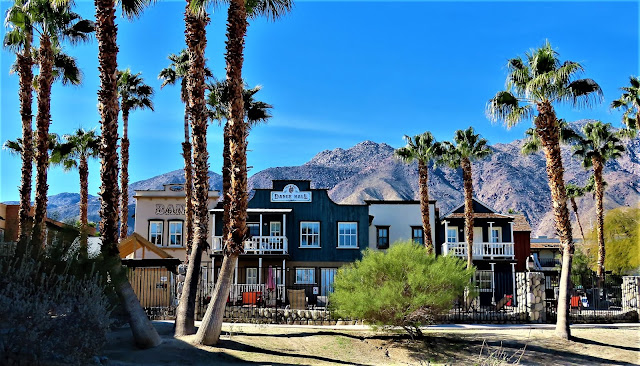 Took another look to the West and it appears the fire is under control.  Looking at those bare mountains, I don't think we have to worry about it spreading outside the canyon.   Sure hope it doesn't scorch the beautiful Palm trees in the canyon. 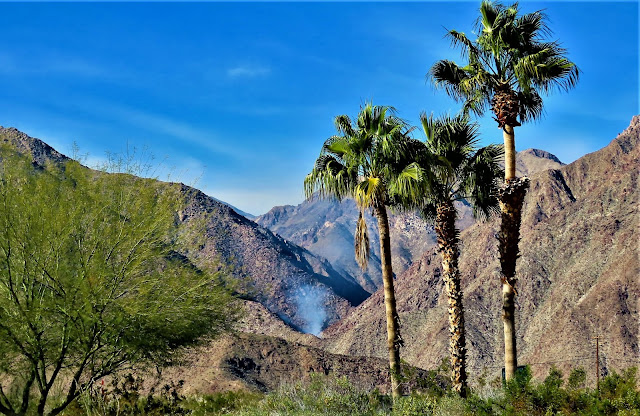 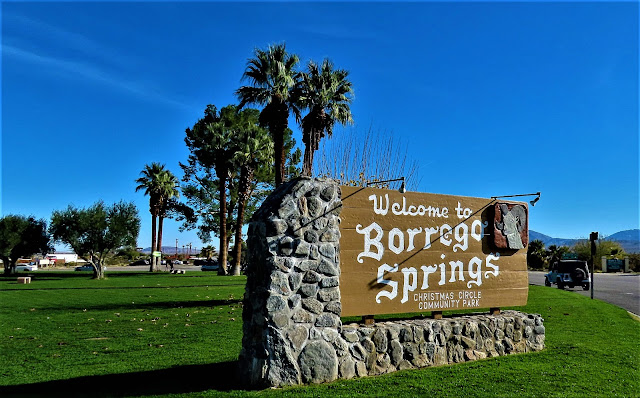 Once laundry was done and folded we went to Christmas Circle so Yuma could play in the grass.

The last place we went on our way home was to make a quick visit to Font's Point.   It overlooks the whole Borrego Springs Valley. 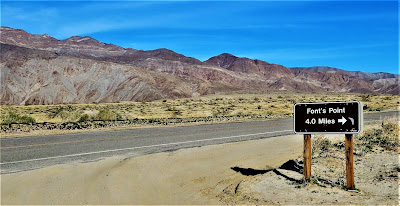 Now for the point.  You are looking straight down to the Badlands.  One false step and it would be a bad landing. :(( 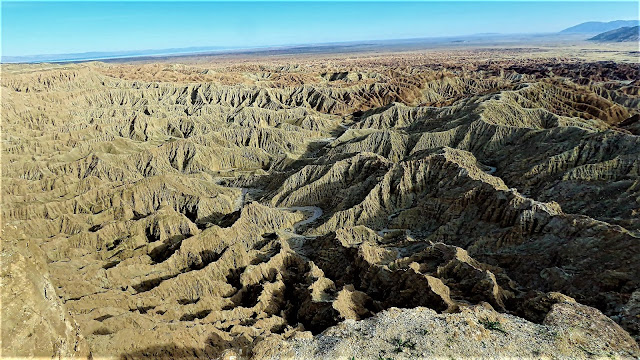 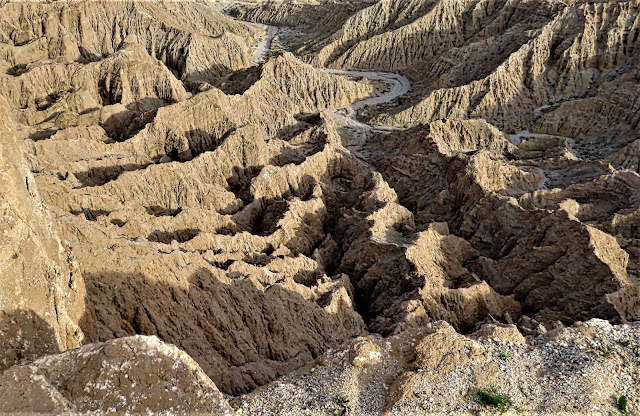 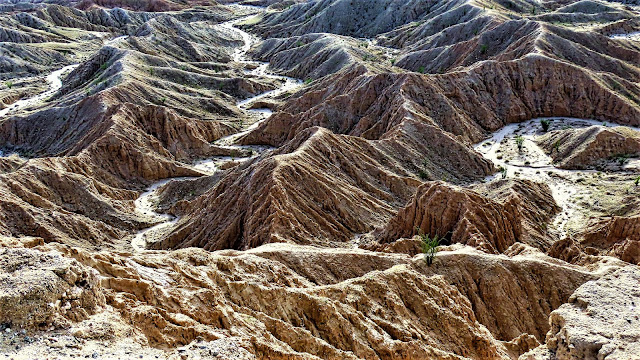 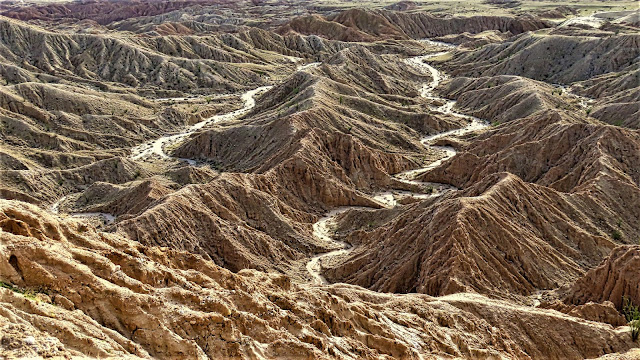 Are you lucky or what!  I can't go on any further, my camera battery went dead! :((

Guess Yuma and I will head on home.  See you later.