Split Mountain and beyond plus a ration of Salton Sea

Today has been an R&R day to give our sore muscles a chance to heal.  But, before I get into today, let me finish our beyond Split Mountain adventure.

We went into two slot canyons with the Jeep.  The first one wasn't the one I was looking for, but wasn't sure.   As we were driving, all of a sudden there was a caravan of cars ahead of us.  The last of the group was backing up.

We stopped and talked to the gentleman who had ties to Ontario, so he and Deb did most of the talking.  Amazing who you can run into in the middle of nowhere.  He and his daughter were with the caravan of cars, but he didn't want to drive any further because it was getting so rocky and narrow.  The rest of the caravan managed to keep moving forward.

Deb asked him if he knew of a slot canyon further down the Split Mountain wash that had a sign identifying it.   Sure enough he did and said to go back and continue West.

Soon we spotted the sign I remembered so clearly, except now I can't remember what it said.  Deb took a picture of it so hopefully she added it to her blog On a long lonesome highway....

We headed up that slot canyon and drove till we couldn't go any further and started hiking.  Again, I won't put my two cents into each picture and let you enjoy the hike. 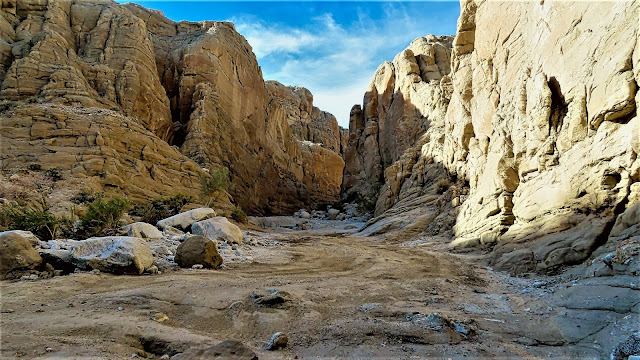 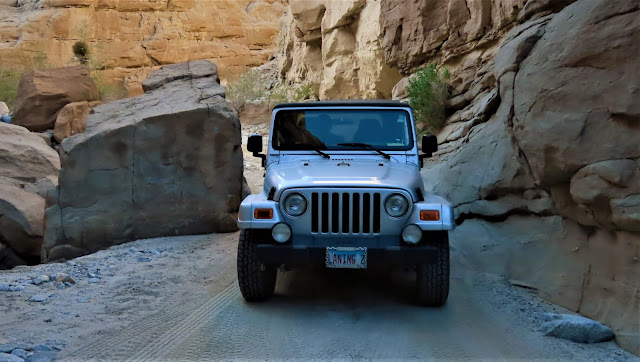 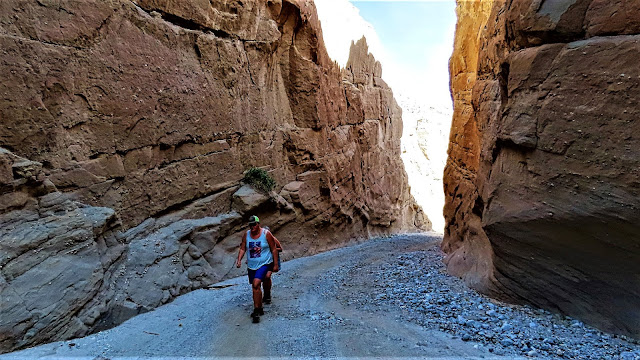 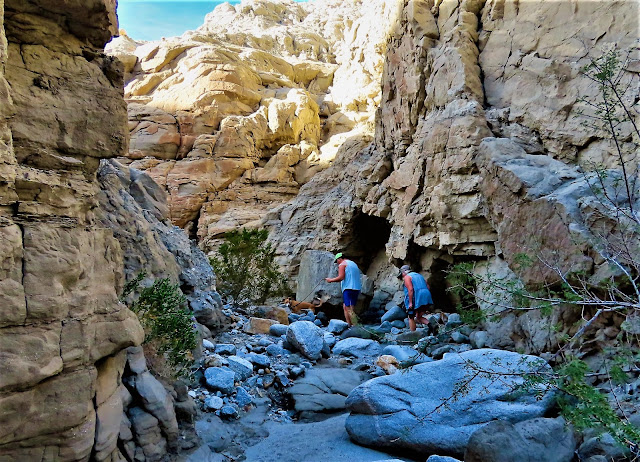 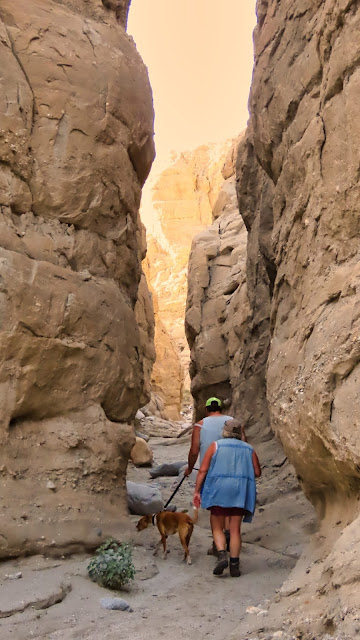 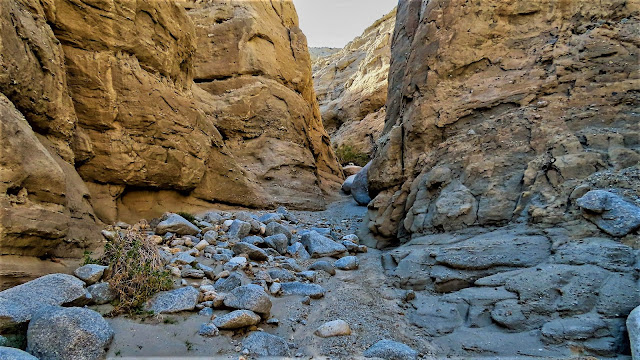 Put Yuma on a leash because there were so many cholla fingers on the ground from the desert floor above.  He kept stepping on them.  Poor Yuma.  Riley did an excellent job guiding him along the slot. 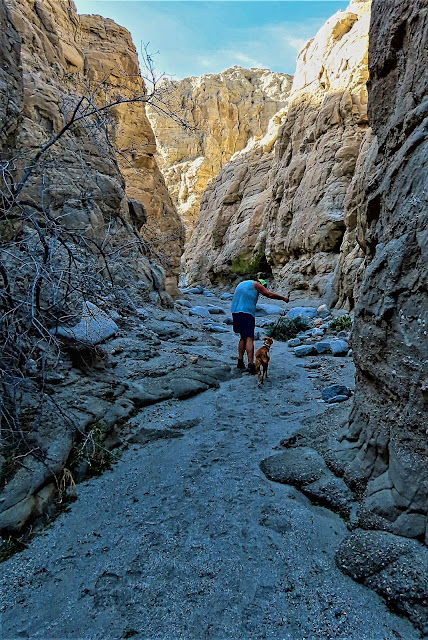 Slowly, our bodies gave out and the slot kept going; however we were getting closer to the end I'm sure. 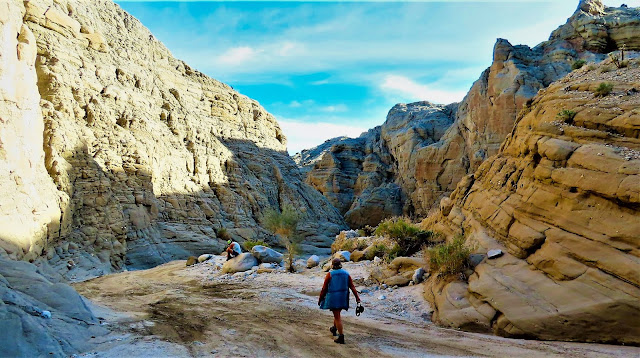 Finally, we all dropped out and Yuma went on around the next bend.  He came back and said we were close, but we had enough and headed back.  The sun was getting low and it was after 3:30.  We didn't want to be out here after dark. 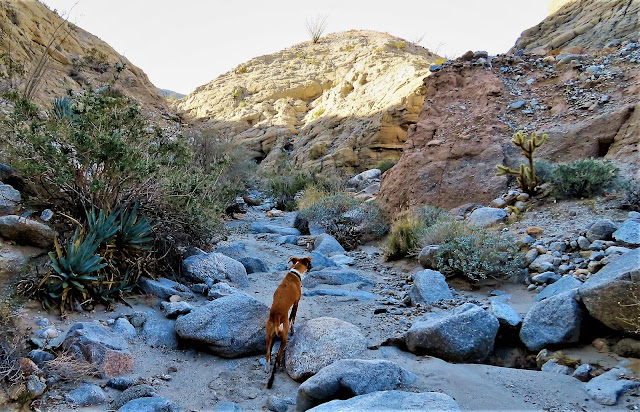 From what I remembered from two years ago it wasn't far to the end.  But, I was wrong!  It went on forever till we just ran out of the strength to push the camera button anymore.

We arrived at the BLM we were staying, but we couldn't find the right way in the dark.  This is ORV country ad there were trails everywhere and it was pitch black out except for the headlights.

Finally, Deb got out using her cellphone light and soon recognized the correct trail and we made it home and some badly needed rest.

This morning Yuma and I slept in till after 8 o'clock and then never left camp till late in the afternoon when Yuma and I went into Salton City to get five gallons of fresh water.

I did put up my local channel TV antenna to see if it would pick up anything.  There are two football games I don't want to miss.  To my surprise, when I turned on the TV I was able to get the Yuma stations loud and clear from here.  I guess, being on the Salton Sea plain instead of in Borrego Springs which is surrounded by mountains, I'm good to go!

Of course I had to take a few pictures of the Salton City excursion! 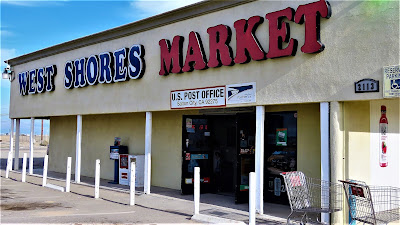 Got my water at market and post office for Salton City. 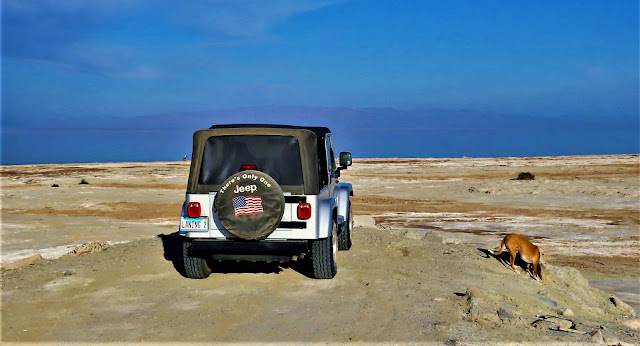 I'm parked on a ramp that was once used as a boat ramp to the sea.  But as you can see the sea has receded quite a bit.

That may look like sand but it was muck.  It was hardened enough to walk on but both Yuma and I sunk in and now our shoes/feet are mucky. 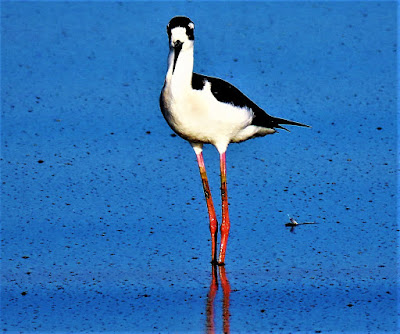 The one lone living thing we saw or heard during our short visit.

It was getting close to dark and I certainly didn't want to get lost a second night, so Yuma said let's get home for dinner and blog writing. 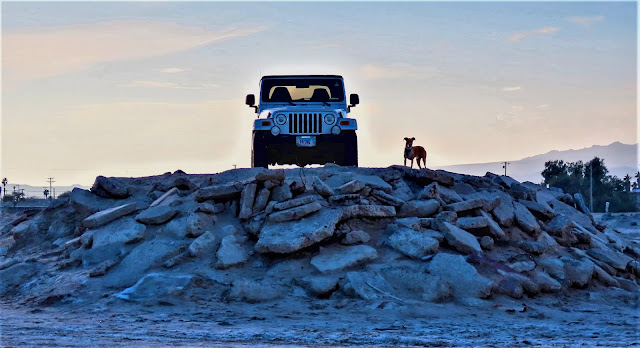 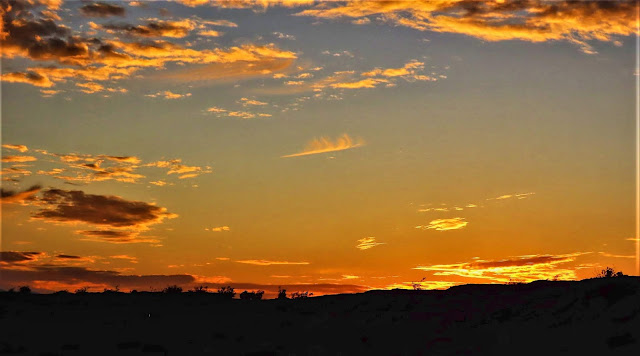 See you later.
Posted by Doug Laning at 8:36 PM