Stuck in the sand and finishing yesterday's Jeep Trip

Woke up this morning a little late, but about normal time.  Closer to 9 o'clock.   I already knew it was going to be a stay around camp and relax day so wasn't in any hurry.  Dolly sent me a text asking if I planned to watch the two play-off football games today.  Of course, I had forgotten but that was a good way to spend the day.

It was just a beautiful day.  Blue skies, no wind and mid-seventies.  It was actually too hot for me to lay out side, so we watched TV in the RV with all the windows and door open.  Love it!

My plan for the day was to take it easy and get my post done early and just enjoy the evening game watching the Tennessee/New England game.  Hoping for Tennessee, but that's a long shot.  New England has won enough Superbowls.  Just watched Tennessee do the impossible and beat Brady and New England!  Yeah!

Well, plans don't always go as planned.  Here I am after 11 o'clock still trying to finish my post for the evening.  Yuma and I were laying outside after his bath and two shotgun booms go off in the lake right in front of our RV.  That just ruined Yuma's day.  There had been shooting all day but further off and Yuma was getting used to that.

I decided right then that I should move first thing in the morning, so Yuma would not have to go through anymore of this.  So, I slowly started getting things ready to move around 4:30 while the first game was finishing.  It was another nail biter too!  I wanted to back the MH out and have it turned around and closer to the road so I could quickly hook up the Jeep in the morning.

I think there was a little guy inside me telling me to do it now and not in the morning.  When I pulled in to this wonderful spot way off the road, I knew it was pretty sandy, but I assumed if I got in I could get out.  You know what assumptions can do to you.

As soon as I tried to back up my back tires started to spin and dig into the sand.  I quickly made the decision not to dig myself in deeper, so I stopped.

Fortunately, there are several people down by the boat dock with four-wheel drive duallies and could easily help me out.  By this time it is after 5 o'clock and the sun is setting.

Unfortunately, I happened to run into Mr. Negative.  When he got here, he immediatly started telling me he didn't think he could help because he may get stuck.  I almost laughed.  He had a big 350 truck and a big chain but no guts.

He hooked up and gave one little pull and his tires spun so he quit because he was afraid of getting stuck.  So he left.  Now I've got to come up with a do it yourself plan.

I finally remembered I had four two by four boards about two feet long each, so I pulled them out and dug the sand from behind the tires and stuck the boards under them and then took the two five foot rugs in the RV and put them behind the boards.

By this time it's dark, but I was going to give it a try.  I bounced from reverse to forward and finally the tires jumped onto the boards and I gunned the engine.  I did this twice.

I'm a hero!!  The MH backed right out of the deep sand and onto the harder sand that could support the MH.  I'll take  pictures of the mess in the morning for tomorrow night's post.

Enough of my leisure day!  Let's get to those pictures I promised you of the Colorado River and beyond.  Won't talk too much; just let the pictures do the talking. 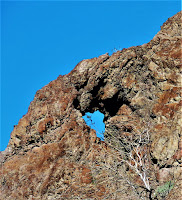 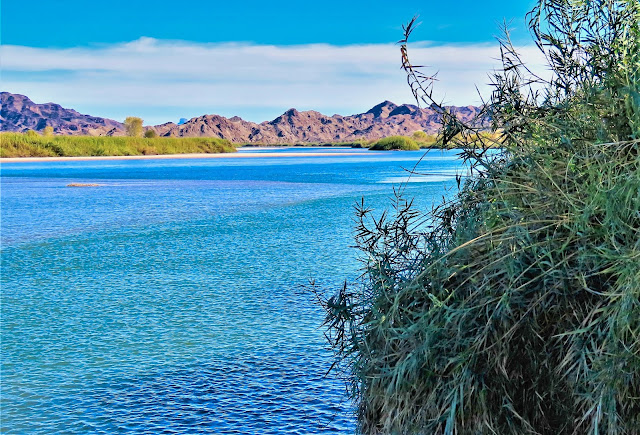 While we were taking pictures at the landing, Yuma went into one of his running in circles frenzies.  Then he stopped as if to make sure we were watching with that little mischevious look of his. 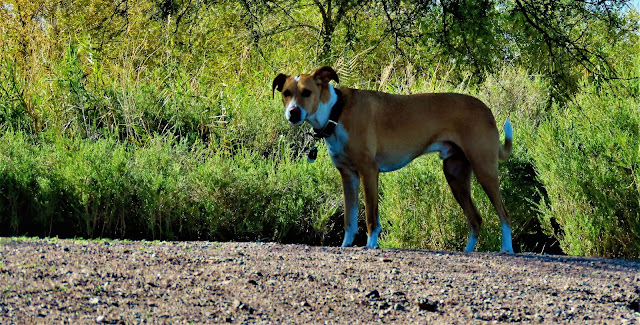 After leaving the river landing we headed over to the Picacho Cemetery. 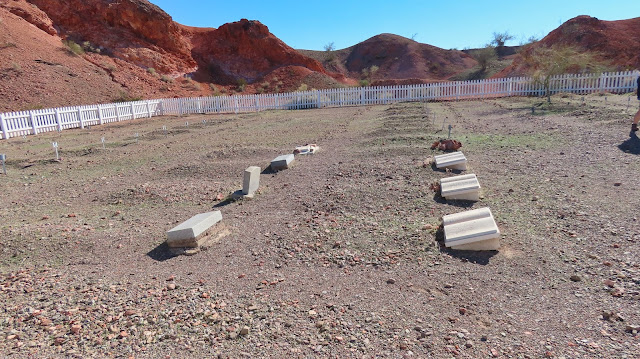 After leaving the Picacho Cemetery, we then headed West toward Ogilby Road and home.  However, this road if you want to call it that, is not maintained and requires four-wheel drive and high clearance.  We've got it covered.  It goes along the Colorado River for a bit, so we get to see some more of that beautiful river.
A long part of this road goes through a large wash.  There is Jerry and the girls down at the bottom. 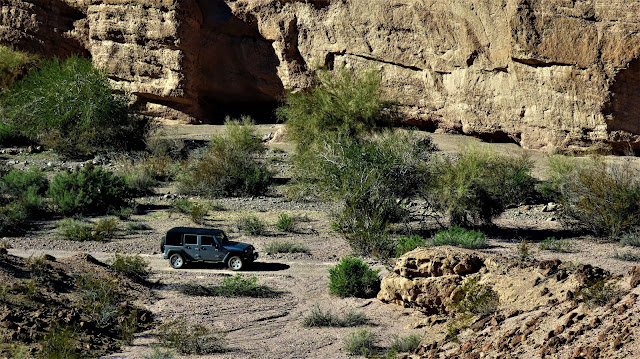 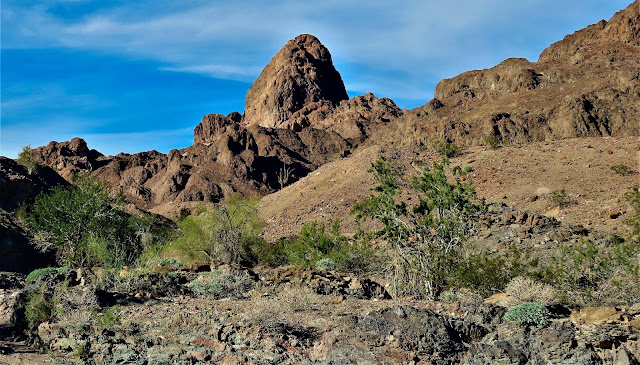 Coming up and out of the wash finally!  Definitely needed the four-wheel drive and high clearance here. 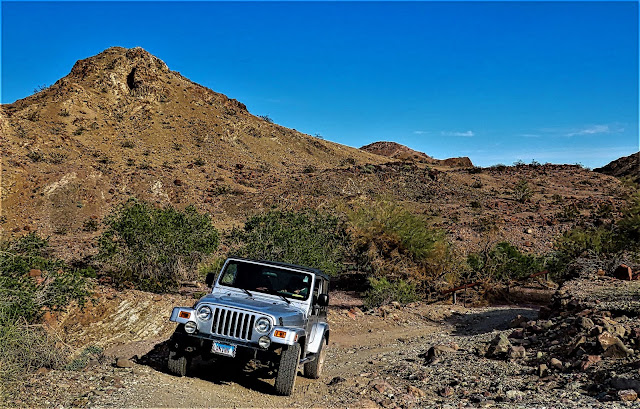 We finally made it to Jerry and Elva's home in the desert.  Yuma was the hit of the day.  It was after 4 o'clock and I think Jerry wore us out.

We didn't stay long, but made plans to have a cook-out on Sunday and chat about our Jeep Day while relaxing and eating hamburgers.

Thank you Elva for setting this wonderful day up for us and lending us Jerry to be our guide.  He did great!  I got the pictures I've alway wanted of the Colorado River in its remote glory.

My day is definitely done.  See you later.