Move to Palm Canyon in the Kofa Mountains

Another day, another move.  But before we could move we needed to stock up on food.  Anxious to go, I was up at 8:30 and after taking Yuma for his walk, we had a full breakfast and at 11 o'clock I headed in to the Walmart store with a list of items from Nick, Yuma and me.

It was hard.  But two hours later and $200 lighter I headed back to the VFW.

We quickly loaded everything into the White Lion and put everything up and we were on our way to Palm Canyon.

We had to stop at the U.S. Army Yuma Proving Ground before we left the area. 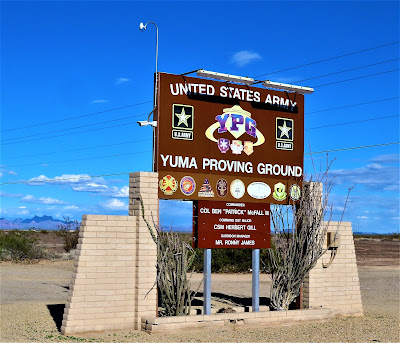 Then we headed down the road for about a mile and stopped to view the old war tanks and big guns no longer in use. 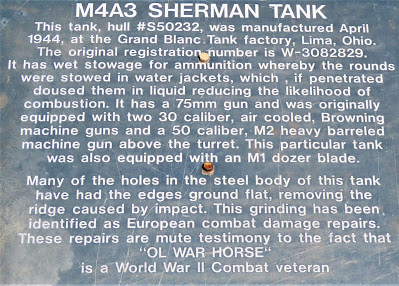 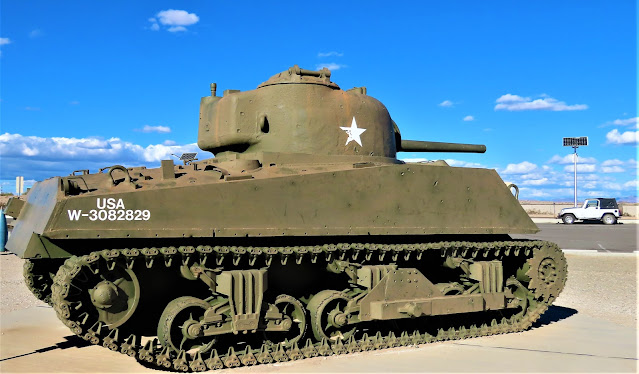 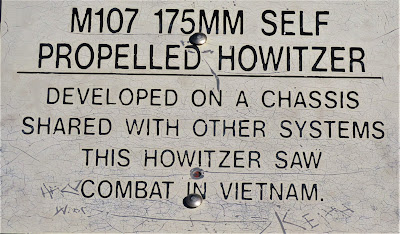 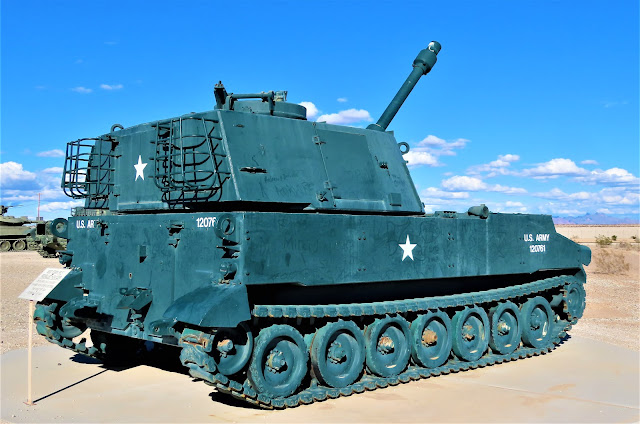 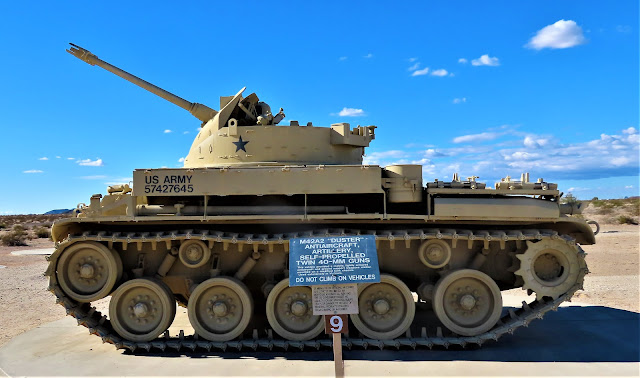 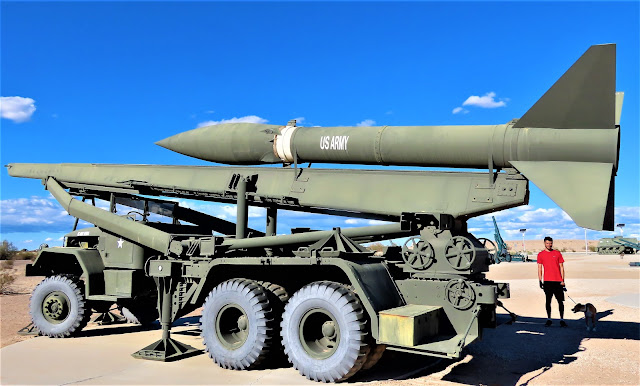 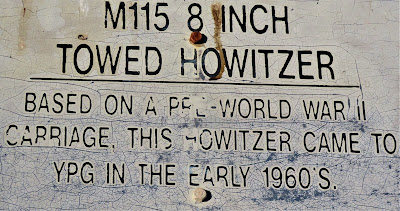 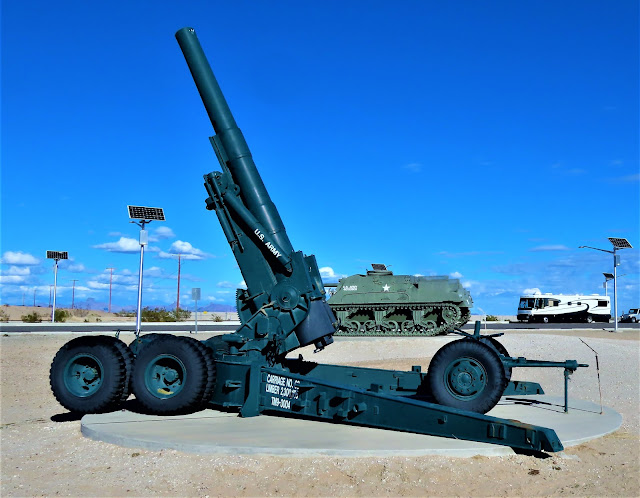 Then off we went north on hwy 95 towards Palm Canyon road about 20 miles south of Quartzsite.

Went by the blimp keeping an eye out for unauthorized people walking through the desert in this area.   It's tethered to the ground and no one is onboard.  Just surveillance equipment. Had to take a picture of Stone Cabin on hwy 95 just north of our destination.

About 10 years ago, Dolly and I were at the Stone Cabin in that fallen down covered patio in the back having burgers and a Coke with Fergie in tow.  A gentleman was trying to make a business here even though there is no water.  It all had to be trucked in.  The next year, the place was closed.  Not a good location, I guess.
Made it to our destination at 4:30 and the very first site we attempted to pull into gave us problems.  I had Nick outside watching to make sure we didn't scrape bottom on the mound of dirt alongside the road.
It was close so I decided to back up and take another angle.  Backing up was a mistake.  Nick was looking at the underside and I didn't turn sharp enough on backing up and ran into the deep ditch on the other side of the road. 😱  When will I ever learn how long this RV is?

Couldn't move and I was blocking Palm Canyon Road.  Luckily, the couple behind us had a 3/4 ton pickup loaded with stuff and he had straps.  I hooked the strap to the frame and he gave me a tug and we were out of their in a flash.  So thankful there are helpful boondockers always willing to give a helping hand. 😀
Went on down the road looking for a easier place to pull in.  Ended up at the pipeline road in a site I have been in before.  Finally, we were in our site and parked for a week or so.
First thing we did was to put up our antenna pole and I had bought the necessary hooks to properly place our flag on the pole so I can raise and lower it easily. 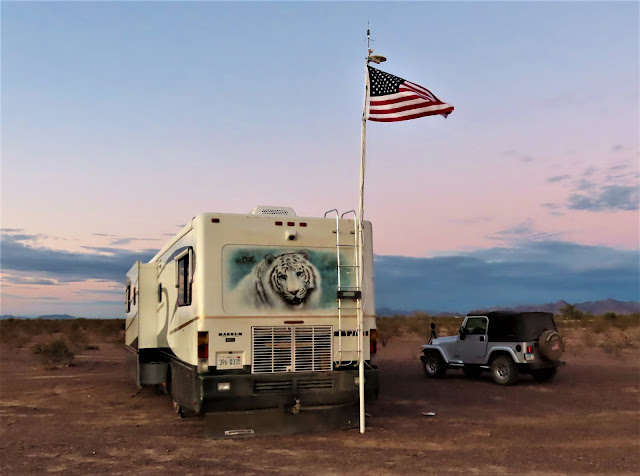 We watched the sunset and then had dinner and I'm finishing this blog.  Downloading pictures is slow so it is already 10 o'clock and time to call it a night. 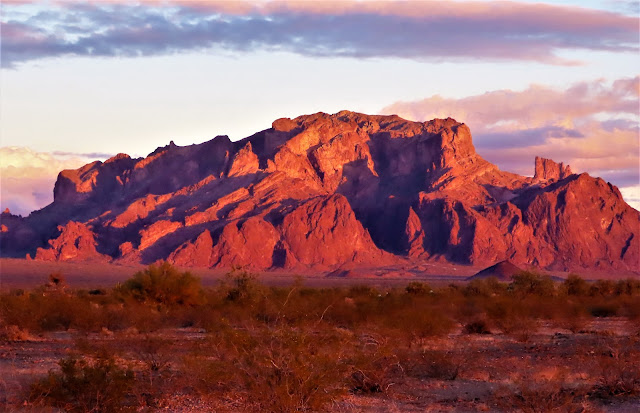 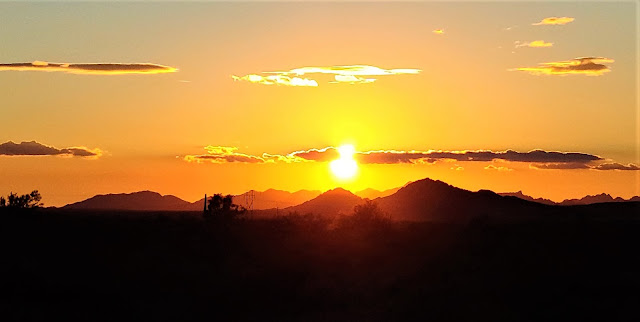 Thanks for stopping by.
Posted by Doug Laning at 11:07 PM