Found a Mica Mine

As I stood just beyond the gate into the Cabeza Prieta National Wildlife Refuge, a white truck with two wildlife rangers came up to where I was standing.  I asked if it was okay for me to enter the park and they said “no problem, but I need to see your permit.”  I had no permit.  They were very nice and told me I could pick one up for free at their park headquarters in Ajo, at my convenience.

What a bummer, I had driven almost an hour to get to the gate, just to have to go back to Ajo to get a permit.  Of course, they followed me out and since there is only one main road out, I decided to just go into town and pick up a permit.

Went into town and as I was completing the paperwork, the two rangers walked in.  We said “hi” and had a nice talk about the area and places of interest.  It was worth the time as it turned out, because now I have maps of the area and places to go see.

Sun coming up over the eastern mountains.

This morning, I headed back down the road and this time took a better look at the cactus I had picked up in my photo of the white streaked mountain and sure enough it is a crested Saguaro Cactus . 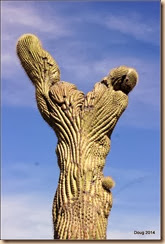 I was soon back at the gate and ready to head in. 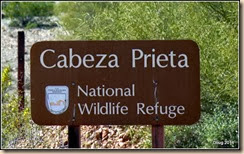 I am now legal to enter the refuge.  Here is a typical looking Saguaro you see in the comics or on TV. 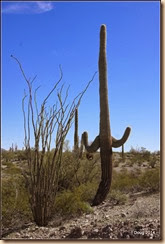 It was at least a mile by foot, 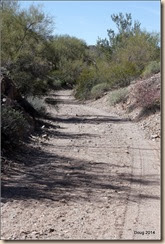 and as I was heading up the last hill,

I looked up and right in front of me was a house.

I had arrived at my destination.  As I looked around the deserted area, I could see the house from the mining area and the bull dozer between them. 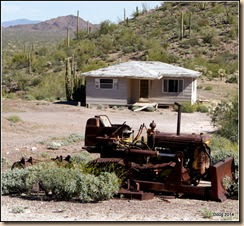 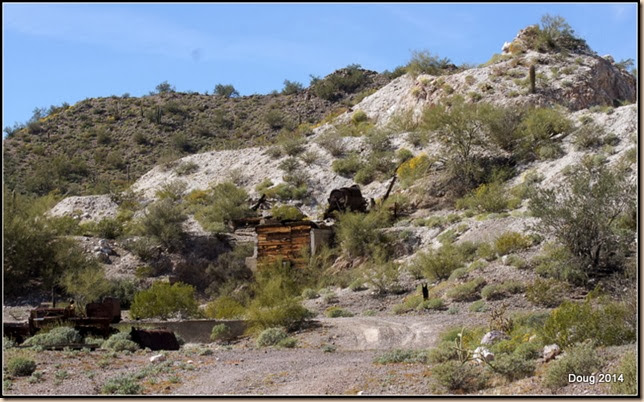 The house looked to have been built in the 50’s and showed extreme signs of ravaging by the elements and vandals.  There was still a lot of furnishings in the home.  Several mattresses, a stove, a couch, table and an old TV.  It has a front room with a kitchen off to one corner, a small hall with two bedrooms and a bathroom between them. 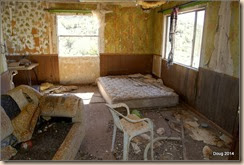 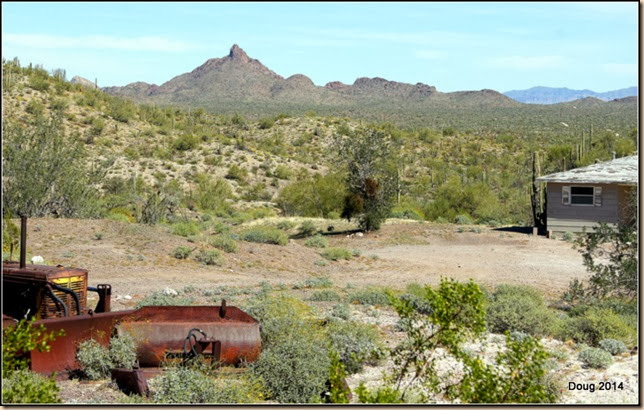 Ole Two Fingers in the background.

I believe this is the mine entrance. 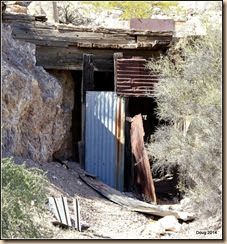 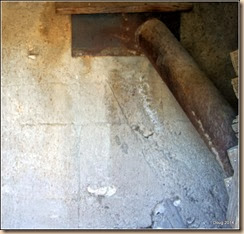 If there had been a mine that went underground, the entrance was completely filled except for a ventilation pipe sticking out of the concrete.  There was evidence of strip mining on the hill and rocks with mica were everywhere.  Flakes of mica looked like small mirror reflections as the sunlight bounced off them.

Much of the machinery used in the mining operation were still in place, but severely rusted.

Walked around the area, taking in the extreme solitude and thinking of the time when men worked the mine, dropping rocks filled with mica down the chute and running that bull dozer to collect more rock.  It was evident that at one time, this was an active mine located miles from Ajo, the nearest town.  It makes you wonder, was the payout worth the effort.

After about an hour, the battery in my camera gave up the ghost and it was time to walk the mile back to the jeep.  Made it home, but was tired from the hike, so laid around the motorhome and watched the Olympics this afternoon and evening.