Monday, February 3, 2014
(Note: Pictures will open in new window when clicked on.) 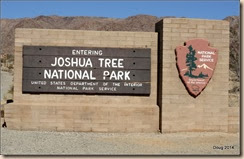 This morning, we decided to drive up to Joshua Tree National Park.  We started out at about 10:30 and went east on S22 toward the Salton Sea for about 22 miles and we made a left turn on hwy 86 toward Indio, Californina.  At Indio, we turned east on I-10 for about 25 miles to the Cottonwood Road entrance to the park.  It was about 90 miles and we got there about noon.

At the ranger station, we checked in using our Senior National Park pass.  I found out that there were no Joshua Trees at the southern end.  They are on the north end of the park near 29 Palms.  We drove 35 miles through the beautiful countryside.

Drove by a Cholla Cacti garden.

We went up mountains,

We hit a crossroad, left to Joshua Tree and the other to the north entrance at 29 Palms, California.  Left we turn and there were lots of Joshua Trees and rock formations and mountains everywhere. 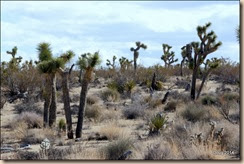 There were rock formations at every turn. 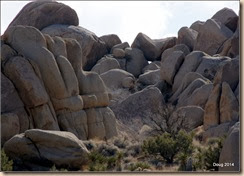 The scenery was beautiful everywhere you looked. 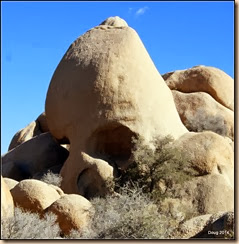 The day was just beautiful with the temperatures near 60 with very little wind.  The roads in the park were great! 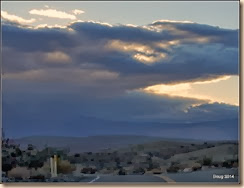 Made it home just as storm clouds cascade over the Santa Rosa Mountains onto the desert floor at Borrego Springs.