Got up this morning to fix coffee and we had no coffee.  I knew then, I would have to go into Yuma today to pick up coffee.  Had a good breakfast and around 9:30 I headed toward Yuma to get coffee.

Since I had to go into town anyway, I decided to stop by the Historic Yuma Prison for a visit.  I had seen the signs to it the other times we had been to Yuma and knew it was on the first exit as we go into town.

Found my way to the entrance with little problem.

Here is the guard tower near the entrance. 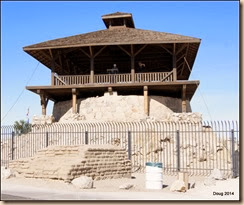 Below and to the right down near the Colorado River was the cemetery.

I paid my $6 to get in and as I walked out on the lawn, a skit was about to take place.  A group known as the Gunslingers gave a little show that involved everybody shooting each other.  The undertaker shoots the lady in the blue dress during an argument.

Here is a link to the history of the Yuma Prison.

After the skit, I walked into the prison.  They had an entrance room, but could not take pictures in there. 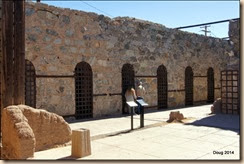 Here’s looking down an outside corridor of jail cells.  This pictures depicts how the cells really looked.  There are three bunks stacked to a side and there are 12 in all. 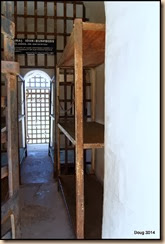 Not much room for 12 prisoners.  There is a door on each side with outside corridors going down the rows of cell doors.

After leaving the prison grounds, I walked down along the marsh area near the Colorado River.  The river runs peacefully through the Imperial Valley in Yuma, Arizona. 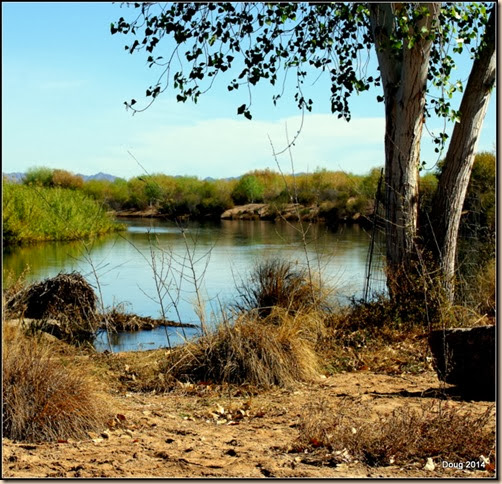 After my visit, I went on into town and stopped at the Target Store, got some coffee, put a few more bucks of gas in the jeep and headed home for the day.

Each time coming and going from our Ogilby Road to Yuma, we pass by this blue and white church just sitting by itself up on top of a big mound of sand.  Need to stop by there one time and learn more about it. 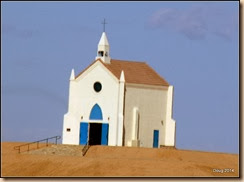 Got home around 1:30 and just sat around and enjoyed the nice warm day with just a wisp of wind to keep us cool.