On to Ajo, Arizona

Last night, we decided we wanted to see other places.  We miss the Saguaro Cactus and the higher desert.  It is also going to get very warm in Yuma this coming week.  High 80s and low 90s which is a little too warm without AC.  I did some research on blogs that are very familiar with southern Arizona and we decided Ajo was the place to go.  Pronounced as Ah and ending with hoe.

Had a quick breakfast and we were on the I-8 by 9:00 Pacific time heading for Gila Bend in southern Arizona.  We made a quick stop in Mexicali where that blue and white church is to take some close-up pictures.  We pulled into the town and it is situated like a small mall with an entrance and exit.  Not much room in there to turn around so I pulled into a large parking area on the east side and stopped.  We could see the church on the hill and we got out to take pictures. 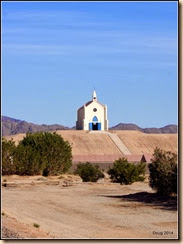 Shortly, two women approached us from the closest building and said that we were in a private parking area and would we move over to the parking area on the west side.  I told her that there was not enough room on that side for me to turn the motorhome around with the jeep attached, so we would just leave.  She then proceeded to tell me that it was $3 for each of us.  I told her we didn’t want to visit the church, just take pictures and she repeated that it was $3 for each of us, so we got in the motorhome turned around in the huge private parking area and drove right out of Mexicali.  Pretty church but greedy people.  Still don’t know much about the church.

We then proceeded to drive through Yuma into Arizona and Mountain time. 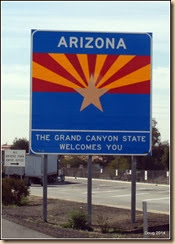 Lost an hour very quickly.  Soon we were into the mountains on the east side and heading down into the beautiful Dome Valley. 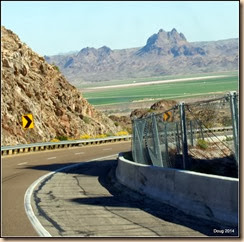 After about an hour we were coming up on mountains on either side of us.  The ones on the left were a light brown and the ones on the right were dark brown. 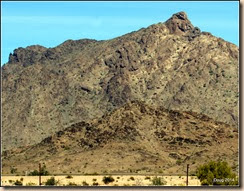 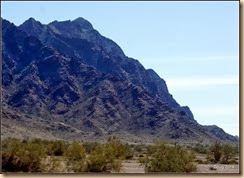 Once we went through the pass between these two mountain ranges, we were in Mohawk Valley.

This valley is large and the town of Gila Bend is in this valley about 40 miles ahead.  Started seeing a few Saguaro Cactus for the first time since we left Quartzsite, Arizona last month.

Not many.  They seemed to be on the hillsides and only a few on the valley floor.  Glad to see them again.

As we drove on I-8 I began to see flashes of light at what looked liked a large oil refinery on the left side of the interstate.  There were thousands of little mirror flashes.  That’s what it looked liked from a distance.  As we passed by I could see there were rows and rows of solar panels.  Thousands of panels in rows going for a least a mile around the refinery.

I am guessing the whole refinery ran off sun power with those solar panels.

We stopped at Gila Bend for lunch at McDs as usual and got gas before heading out on highway 85, straight south for 40 miles to Ajo, Arizona.  If you weren’t deliberately going there, you would never see Ajo.  It is in the middle of nowhere.  Only town near it is Why and there are not many reasons to go there either. 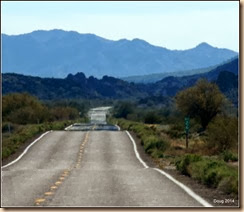 As we approached Ajo, we started seeing mountains and Saguaro Cactus, Ocotillo Cactus and Barrel Cactus all over the mountains around us. 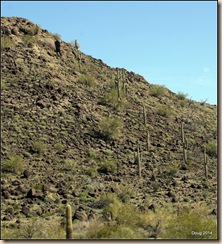 Our plans are to stop in Ajo, get propane, water and dump the tanks before heading out to boondock on Darby Well Road south of Ajo.  I stopped at the Shell station and got propane and while there asked where I could dump my tanks and get water for the motorhome.  He told me Amy at the RV Park next door would provide that service for a fee.  Went next door to the Shadow Ridge RV Resort and talked to Amy.  $10 for the dump and $3 for the water and I was out of there and heading south down highway 85 toward Mexico.

Luckily, I found Darby Well Road going to the right not more than three miles out of Ajo and didn’t go into Mexico.  We are close to Mexico and they warn that illegal aliens had been known to go through the BLM land around Ajo, so we have to be watchful.

Pulled onto the dusty dirt road and headed west for about three miles and then I stopped to unhook the jeep so we could find a boondocking spot.  They were not easy to spot in all the Saguaro Cactus that sprouted up everywhere we looked.  The mountains are close and the cactus are everywhere.  It is very beautiful here.

Found our home after about an hour of going up and down the road and some of the roads going off the main road.  Lots of land, but not a whole lot of camping areas.  If we got too far back in the the BLM, we lose our cell phone signal.  That is not good, so we had to back track till we found our spot.

By this time, it was after 5:00 and the sun was fast disappearing, so had to hurry to get set-up.  Here are pictures of our boondocking home.

By the time I got the cell phone boosters connected, the antennas up to ensure we could text and have internet, then get the TV connected to the Dish and call the Dish Help line to get local Tucson channels so Dolly could get the Olympics, it was dark outside and time to call it a day.

We are hoping to stay here for several weeks, checking out the unique town of Ajo and the surrounding countryside.  Hopefully, the weather cooperates.  We also want to be sure and see Organ Pipe Cactus National Monument which is 40 miles from here.