Today is my oldest son’s birthday.  Happy 45th birthday, Ben!  Hope you have many more.  He lives in Lebanon, Indiana and it is snowy and cold there today!  Hope this cheers him up. 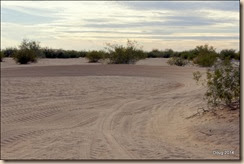 After breakfast today, I made a trip into Yuma to get gas for the jeep,  fill 10 gallon jugs with water and stop at Walmart.  Had to get some oil for the generator and look for a rug I can lay outside the motorhome to help clean our feet before coming in.  Hard to keep the sand out, but I am doing a pretty good job at it.

I saw a Payless Shoes store next to the Walmart so stopped in there and bought a pair of loafers that I can slip easily on at night to run outside or to take Fergie for a late night stroll.  My old ones are shot. They had a “buy one and get the second pair half off” sale, so I bought a pair of light tennis shoes.  The boots have been bothering my ankle, by pressing on it, so I hope the low cut tennis shoes will eliminate that problem.  Lots of walking around here and it isn’t even terrain.

Got home around 13:30 and tried everything out, then Fergie and I rested for a little bit.  Wasn’t long before I wanted to see what was in those black mountains just north of us, so hopped in the jeep and headed north.

The dusty dirt roads leading into the mountains were rough with lots of rocks.

Saw a lot of rock that had been pushed down hill from the side of the mountain, so climbed up hoping to find a mine, but nothing but a hole dug into the side.

As I got into the middle of the mountains, I found that there had been a lot of strip mining done and they had dug so deep that they left a small lake at the bottom of one of their pits.

Very rugged country back it in there, and the road pretty much disappeared as I got to the pits.  So, turned around before I got stuck and headed back to civilization.

Later in the day, Fergie and I took a walk through the washes near our home and looked at some of the plants growing here. 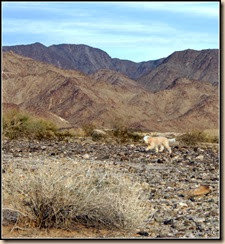 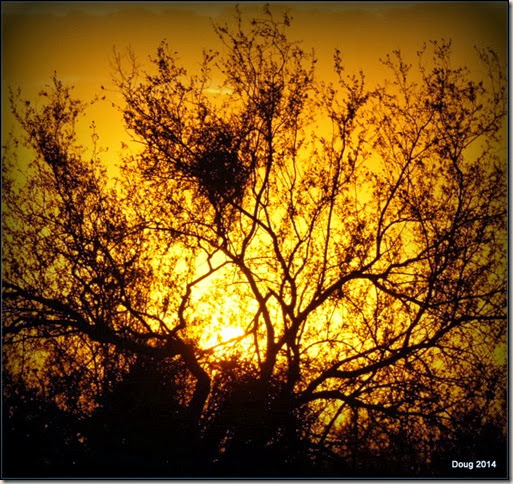