This morning, I was on a mission.  Yesterday, while away, a big wind must have come up.  It blew over my Dish but don’t think it hurt it; but it did hurt my solar panel.

The solar panel weighs about 35 pounds and it had been blown about six feet.  Unfortunately, the electrical cable had only about a foot of play, so it pulled the cable away from the solar panel.

Took it inside and inspected it and the panels were fine.  They were dusty and needed a good cleaning, so I did that.  The two wires, red for positive and black for negative were fine and I could see they had just pulled away from the monitor.

The monitor was labeled clearly, so I could tell exactly where to put them back in.  I loosened the two screws and placed them back in and tightened them again.  I thought all would be fine.  Because it was late and cloudy, I did not test the solar panel.  I decided to wait till morning.

Morning came and usually the first things I do are put the coffee on, put the solar panel out and turn on the small 500 watt inverter.  Then I take Yuma for his morning walk.

Well, I did all these things, but when I came back from our little walk, I noticed the batteries were not charging.  Now what!

Unhooked the cable from the battery and brought the solar panel back in and placed it on the bed for better inspection.  Checked the wires and they were securely fastened.  Checked the small 7.5 amp fuse and it was not fine.  It is small and my eyesight is not what it used to be.  I had checked it quickly yesterday and it looked okay, but today with closer inspection I could see it had blown.

Now I don’t know if it happened yesterday when it blew over or this morning when I hooked it to the battery, because I hooked it up wrong.  I have no 7.5 amp fuses here, so after breakfast I need to make a run to the NAPA store in town.

After our breakfast, we jumped in the jeep and headed for town to get a fuse.  Yuma loved the grass at Christmas Circle, I told him we would stop and stay longer today.  He can’t wait! 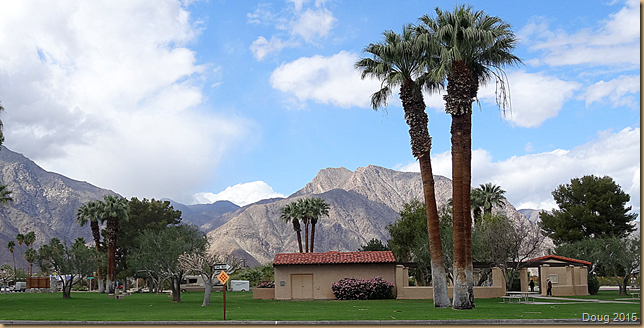 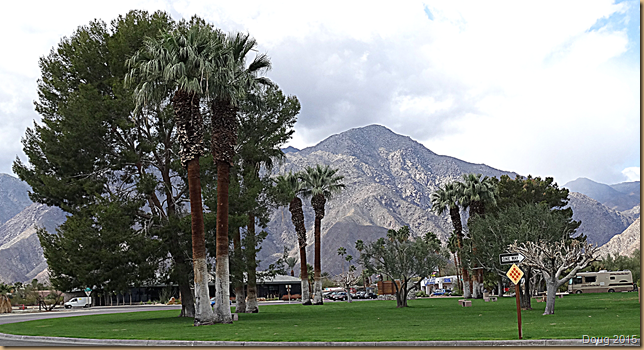 Since he couldn’t wait, we went there first.  Yuma immediately found another friend and the two of them just had a great time. 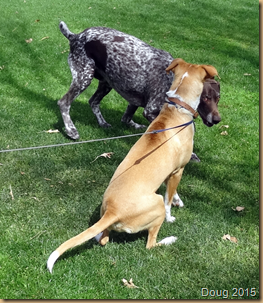 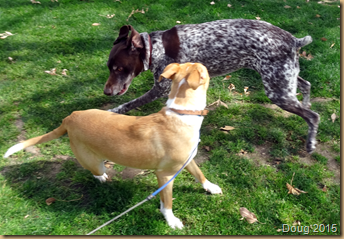 They played for about fifteen minutes, until the older dog got tired.  His owner said he was eight years old.  Then Yuma and I walked around while he smelled everything.  We sat for a spell. 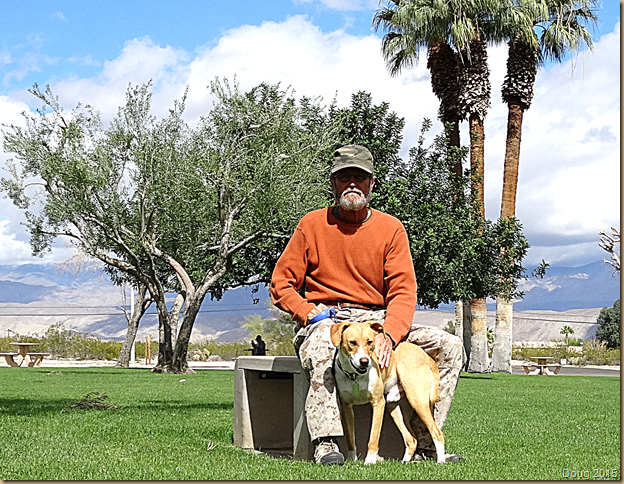 After our fun, we ran up to the Visitor Center and grabbed a free map of the park.  We were so close to where S22 went up into the San Ysidro Mountains a couple of days ago, I decided to make a quick run up for another photo of the Borrego Springs Valley.

We started out at 800 feet on the desert floor looking up 3160 feet at Indianhead Peak and started our ascent.  This is not the mountain we drive up.  We actually drive through a series of canyons and valleys to get over these mountains.  If you are ever here, be sure to take the 22 mile drive up to the valleys in these mountains. 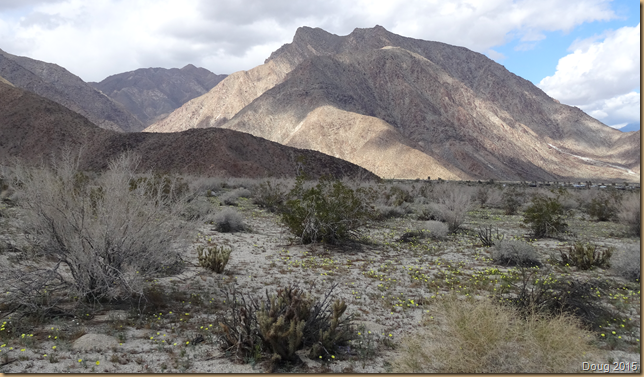 We only drove about three miles up the road, but it goes up quickly.

Our camp is in the Clark Lake Dry Bed on the other side of the small mountains  just before the larger ones at cloud level in the background.  Borrego Springs is in the dark valley in the center portion of the photo.

See the car coming around the curve over on the left in the shadow?  The road curves around all the way up the mountain.  A lot of work was done to carve this road out of the mountainside. 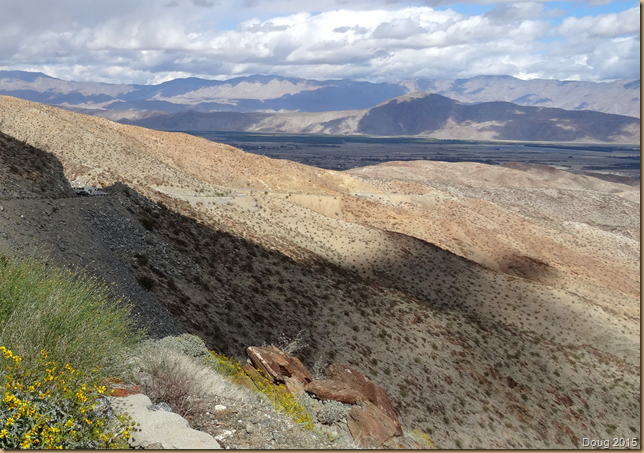 I wish the photos would turn out as beautiful as I what I am seeing, but just can’t seem to get it right.  This country is so different than what I see each day in Illinois, that is for sure.  Maybe, it is because I was born near these mountains that I seem so attracted to them.

Back to my mission for the day.  After Yuma’s fun and our quick excursion up the mountains, we went back into Borrego Springs and stopped at the NAPA store and picked up a five pack of 7.5 amp fuses and headed to camp in time for lunch.

Ate lunch and rechecked the cables to make sure they were secure and placed a new fuse into the inline case.  Took it outside and hooked it to the battery.  The sun is shining so I should see the voltmeter at around 13 volts.  Voila! 13.09 volts.  I have power once again.   All is right with the world again.

We laid outside for awhile, but the 62 degree day with the wind was too much, so we went inside.  Here is what it looks like looking to the west.  You can’t see it, but Borrego Springs is just over those small mountains under that big cloud coming at us from over the San Ysidro Mountains.  San Diego is over there.  Wonder if they got any rain.  Indianhead Peak is on the left side of that cloud in the center of the photo. 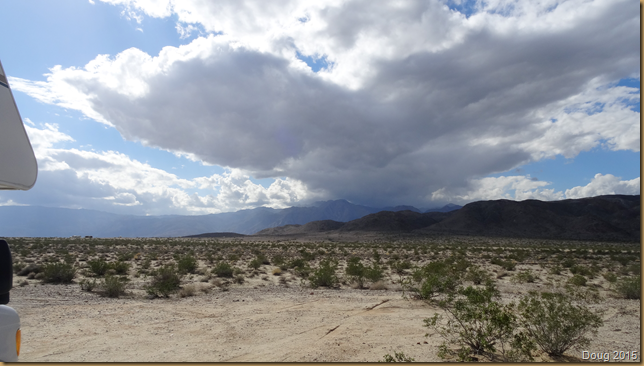 This is what the walking terrain looks like as Yuma and I take our walks.  A little tricky in the dark with a flashlight.  The ground is sandy, so no mud when it rains around here.  In fact, we had a little rain last night, but the sand absorbs it so quickly, there were no puddles this morning. 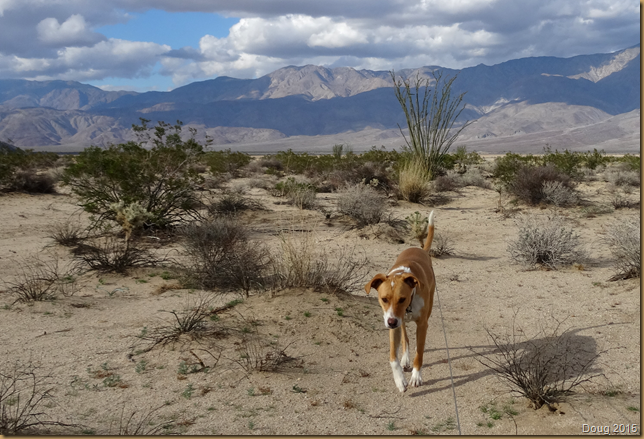 We both prefer the small sandy washes when they go in the direction we are traveling. 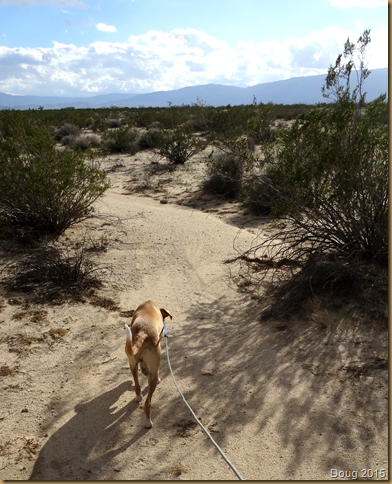 Ah!  Home sweet home.  What a view!  How would you like to wake up to that view in the morning? 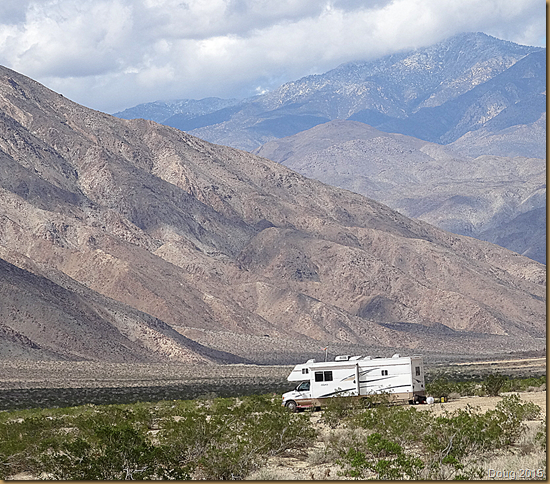