This morning, Yuma and I were up early around 6:30, so we could find a place to take a walk where there wasn’t asphalt.  The Walmart and surrounding area is brand new, so there is a lot of planting going on.  We did find an area behind Walmart that was wide open field.

What a view looking west.  That’s with a 300mm zoom.  That is San Gorgonio Mountain in the San Bernadino mountain range.

After our walk, I made some coffee and did some computer reading and at a quarter to nine, we left Walmart and drove the 2 miles to the Verizon store.  Got out and walked up to read the sign giving their hours and it doesn’t open till 10 am. 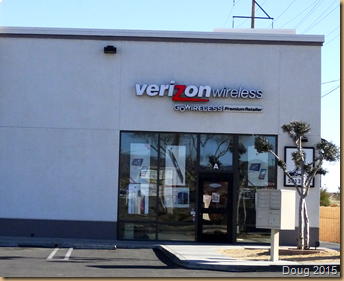 Good thing I have my home with me.  Went back inside and had another cup of coffee and read my hometown newspaper, The Pantagraph. 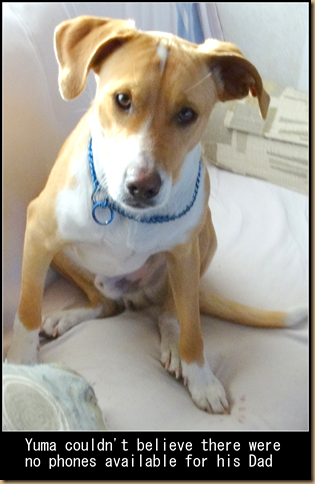 At 10 am sharp, I was in the store talking to a young man, the only one behind the counter.  Told him my story and he checked my account and sure enough I have insurance, but there is a deductible of $149.  Bummer, but much better than paying $700 for a new phone.

The young man said they would mail it overnight to an address I give them.  Great!

Not Great!  When I called to make the lost phone claim, the young lady Amanda told me that my phone is so popular they had none in stock and it would be on back order.  That means an average of 3 – 7 days before it would be available to ship.

At first I was shocked, but then as I thought about it, I was planning to visit the Joshua Tree National Park for at least three days anyway, so I told Amanda, that we had a deal.  I would find a UPS or FedEx store and have it shipped to Yucca Valley.

In the meantime Yuma and I would find a boondocking spot and visit the park for a week.

First thing we did was head east on 29 Palms Hwy (hwy 62) to the west entrance of the Joshua Tree National Park in the town of Joshua Tree, which was only 6 miles down the road from Yucca Valley.  Yucca Valley  and Joshua Tree are no more than stores along 29 Palms hwy, but houses are being built on the hills north and south of both towns. 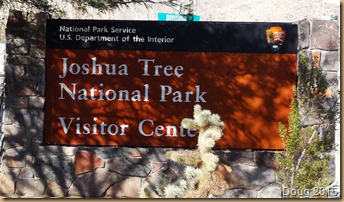 We stopped at the Joshua Tree National Park Visitor Center.  The place was a zoo.  People lined up to either talk to one of the two park rangers behind the counter or pay for something they found in the little shop they had there.  After about 20 minutes, it was my turn.  Asked the lady where the closest place within the park I could find a place for a 30 foot motorhome.

Evidently, the park cannot handle much over 30 feet, so she showed me where to go to find a place about 30 miles into the park.  But then I found out it was a campground and would be $8 a night.  There are no free boondocking places within the park.  At least that was my understanding.

She did say there is BLM land available for boondocking outside the park and that is good enough for me.

The ranger gave me a pamphlet with directions to the nearest BLM which is about two miles east of Joshua Tree and three miles north.  So, Yuma and I headed there.  The land looks much like the other BLM land we have stayed in.  I think I am spoiled from the views I had at Mojave National Preserve.

I did pass thousands of solar panels on both sides of the road as I headed towards my new home.  There were enough to light up the whole town of Joshua Tree I am sure. 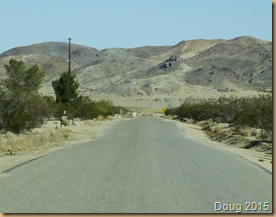 There is the designated BLM land dead ahead just on the other side of that telephone poles.  Not too crowded.

We are all set up now and ready for tomorrow’s visit to the Joshua Tree National Park.