For some reason, I slept soundly last night.  The road noise was not a bother.  Woke up after 8 o'clock and just took it easy eating breakfast and having my coffee.  It is going to be another gorgeous day.  Don't you just hate these broken weather records.  Same every day.

Around 11 o'clock while I was on my last cup of coffee I heard a strange noise.  It was my phone.  It was ringing.  Picked it up and Kenny was on the other end saying "Good morning, Doug".  Said they got the two new batteries in and it was running like a champ and ready for a test drive.

Didn't want to act too excited, I told him I would be there in about an hour.  It was noon when I drove into the RV Lifestyles parking lot. 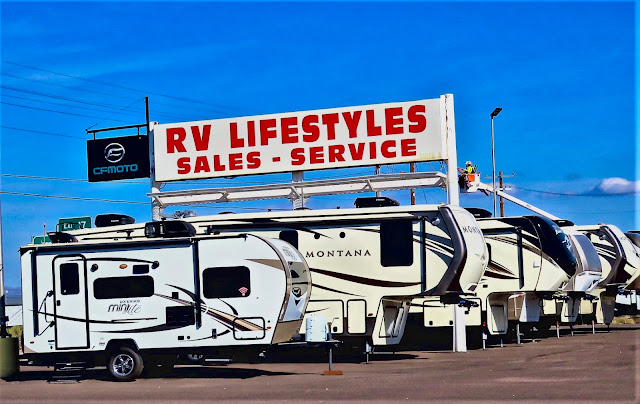 Only in the office a few minutes before Stewart, one of the salesman was ready to take me on my first drive.  Evidently, Kenny can't drive the big rigs for some reason.  I didn't ask why. 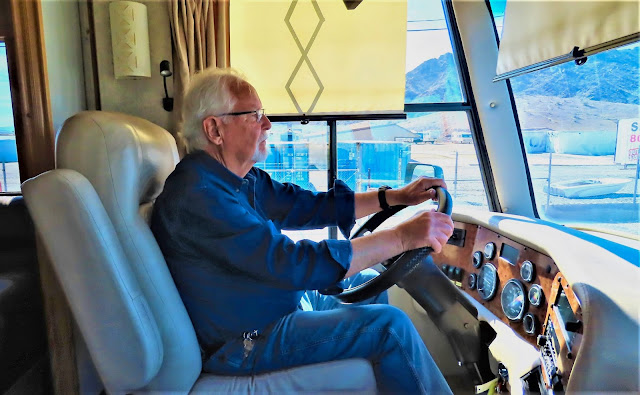 Stewart drove the White Lion out of the parking lot and down the road a piece to where there was a large lot and pulled over.  I think they didn't want to take a chance that I may have a big wipe out in their parking lot and take out some of the really expensive motorhomes. :)) 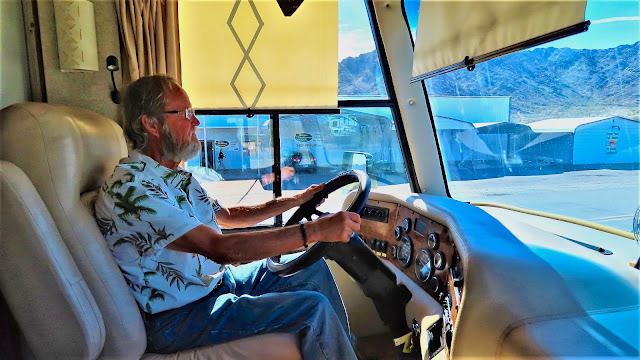 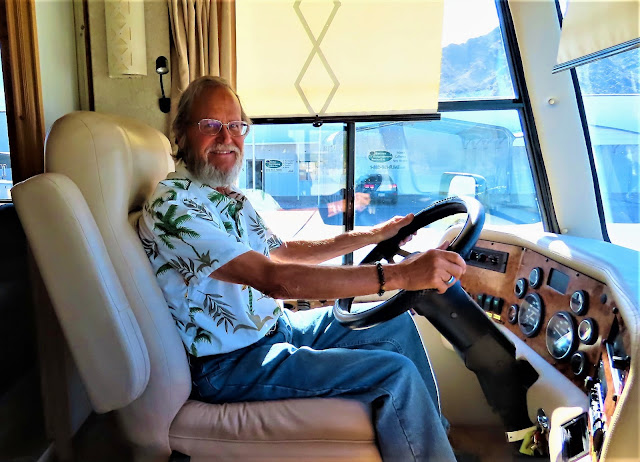 Now don't I look like I belong there?  We only drove maybe five miles, but I have to say it handled beautifully.  I didn't feel a bit of intimidation or hesitation.  It actually has a better turning radius than my MH.  In the picture above, I think I gave away how much I enjoyed driving this big rig.

I loved the big air swoosh sound it gave when I put the air brake on and shut her down.  Darn, I forgot to blow the air horn, but will if there is a next time.

Kenny was waiting when we got back to see what I thought.  Told him, lets go inside to his office and do some wheeling and dealing. 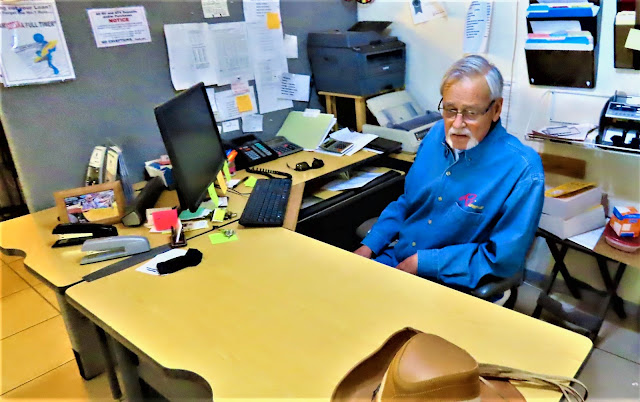 We had an enjoyable chat to loosen up.  They were serving free hotdogs in the lobby, so I went out and got me two and then I was ready to make a bid.  This motorhome is on consignment so Kenny is really only the middleman.

I made an offer and he said he would call when he got an acceptance or counter offer.  Or, if he just tells me where I can stick my offer.  This all took a little over an hour and I was on my way.

Yuma had stayed home and as usual he was ecstatic when I opened the MH door.  Texted Dolly to let her know where we stood and then did a little house cleaning.

Around 2:30 I headed over to the social society for Happy Hour.  I'm getting more comfortable doing this thing and starting to relax and let my hair down.  And I'm getting a lot of hair to let down.  They are such a nice group of RV people.

Craig, a member of the HH group brought out his battery powered plane and gave us a grand air show.  He is an excellent pilot with 16 years of experience.  It was beautiful to watch.  Lots of pictures but I cut it down to a few.
It was very quiet and just beautiful to watch it go through its paces.  Keith really know his stuff.

We were having such an enjoyable time, it was nearly six o'clock before we parted for the evening.  Did I ever mention it was a gorgeous day.  Even as the sun was setting, it was still comfortable. 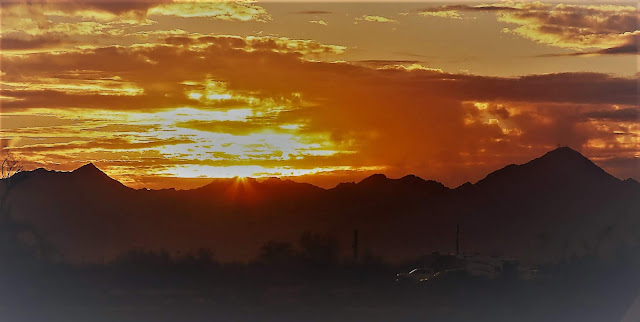 Kept my phone nearby the whole afternoon and guess what?  No phone call from Kenny.  Still giving me that great service!  Maybe tomorrow and maybe not.  With Kenny you just have to go with the flow.

Whatever way this goes, I am enjoying the experience and learning too.  We'll see what tomorrow brings.  See you later.