Stuck in the sand and touring the Cargo Muchacho Mountains

Another beautiful morning after a great rest last night.  Warm already and no wind.  After breakfast, it was so nice Yuma and I sat outside and I read Blogs while Yuma enjoyed the sun.

I had just gone back inside and wondering what to do on such a beautiful day when Yuma started barking.  I thought it was just a car going down the road and told Yuma that but he ran to the door barking.  Just as I was going to peek outside I hear a knock at the door.

It was Tom.  I didn't know it but my "what should I do today" was going to be answered.  Tom said he was coming down the road and saw what he thought was someone with a flat tire and went over to see if he could help.  He needed help all right but not with a tire, but with two tires.  He was stuck deep in the sand.

Tom remembered I had been in the same dilemma just a few days back, so he came over to see if he could borrow the boards and carpet to give them a hand.  Of course, I wasn't going to just hand out my valuable equipment so Yuma and I grabbed our equipment and followed Tom to the disaster zone.

Yuma took one look and shook his head at Tom to say this is an impossible task, but lets give it a try. 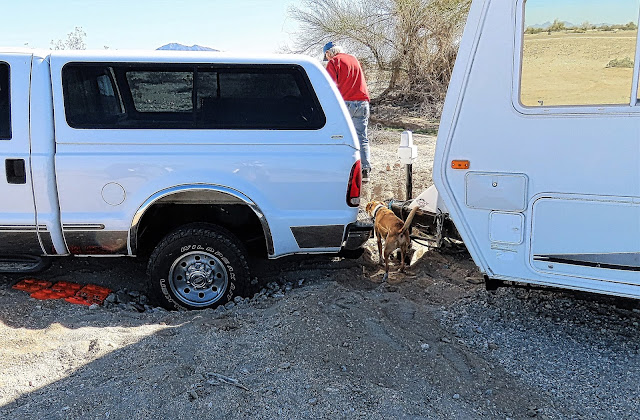 We met Tony.  Tony had come in last night in the dark and what he thought was a road was actually a sandy wash.  First mistake he made.  He wasn't going to worry about it all night, so he spun the tires deeper and deeper into the sand.  That was mistake number two.

Then he started digging the tires out and put a jack under one to put rocks and spun some more.  Finally, he was just too tired to do anymore digging and went on to have a worried and restless night waiting for morning.

In the morning, Tony made mistake number three.  Instead of walking around to find the biggest truck and ask for help, he dug some more and that's when the kind hearted Tom stopped to help.

Now we have three of us digging and putting boards under the tires.  Worked for me, why not Tony.  We then tied a nylon rope to my Jeep and we were just getting ready to be heroes when out of the blue this huge Ford truck pulls up and two strapping men jump out and take command.

Where in the heck did they come from.  Then I found out who the real hero is.. 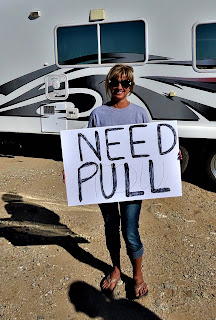 I'll be darn if Tony's wife, Kellie didn't make up a sign and got into their golf cart and go down to Ogilby Road and sit in the there holding up the sign.  Talk about a smart coookie!

It wasn't long before these two guys stopped backed up to her golf cart and jumped out to ask her if she needed a tow.  Kellie told them it wasn't her golf cart that needed help and led them to the real problem.

They hardly said a word.  Just told me to move my Jeep and one of them pulled out a huge tow strap hooked it to the front of Tony's truck and it wasn't more than a minute and Tony's truck and trailer both zoomed right out of the sand onto hard dirt.  You talk about a happy and relieved pair. 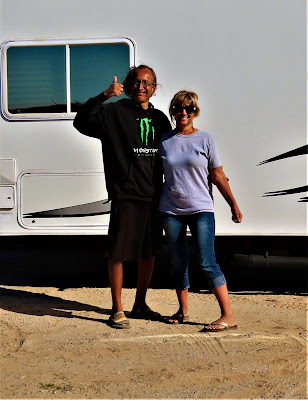 We talked a few minutes and one of the men said sending Kellie out to the road was smart.  If it had been Tony, they would have just gone on by.  We all had a big laugh and the two men were gone as fast as they came.  Amazing what happens in the desert.  You meet the nicest people.

Unfortunately, the camera doesn't show how deep those two tire hole are.  But they are over a foot deep.  Here are some pictures of the carnage: 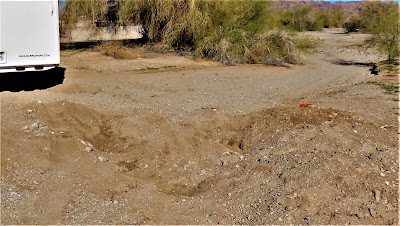 After our morning and early afternoon workout I went back to my original plan for the day.  I wanted to drive into the Cargo Muchacho Mountains just North of our camp.  Lots of mines up in there.

Jerry and Deb had just gone up there a few days before so I stopped by her place to ask for directions.  She said she would do one better and be my guide for the afternoon.  We checked with Tom and Deb to see if they were interested.  Deb was busy cooking some yummy stuff and couldn't leave but Tom was game.

We all piled into my Jeep and headed out.  By this time it is 2:30 and Tom had planned a bon fire for this evening around 5 o'clock, so we didn't have all day.

These mountains are riddled with mines.  Big commercial ones and small Mom and Pop mines.  There are bad roads going everywhere. 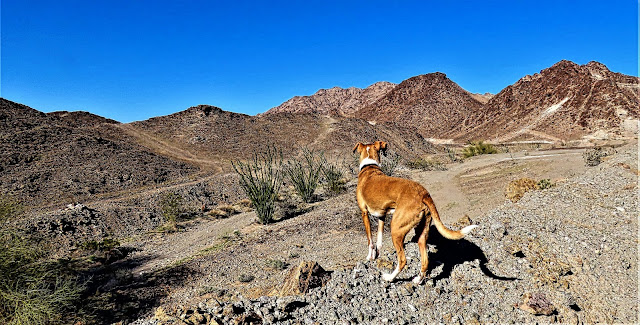 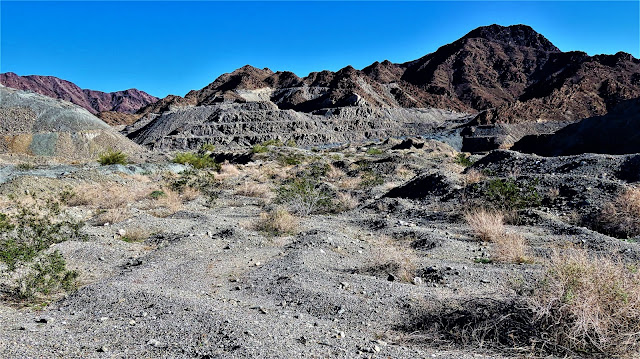 Large inactive commercial open pit mine.  Water has collected at the bottom.  Be careful Yuma!  That's a big hole. 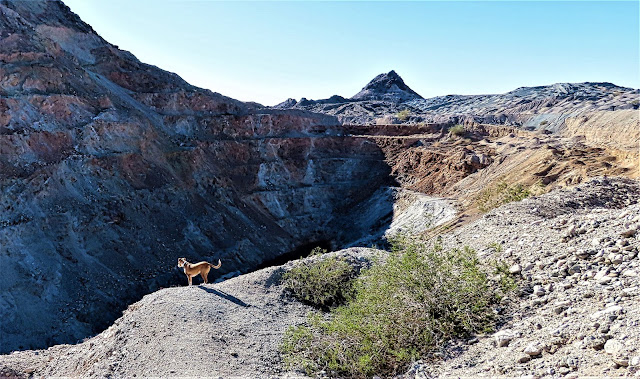 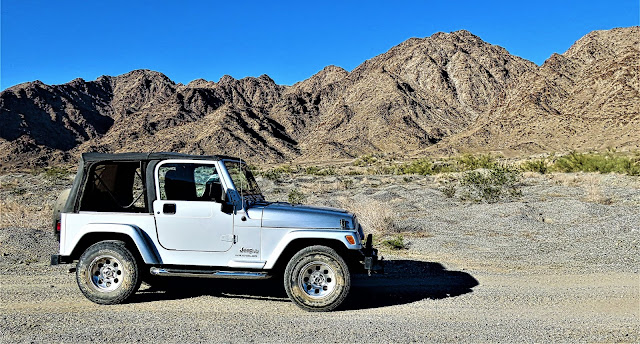 We came up that wash you see on the lower left to get to this Mom and Pop mine. 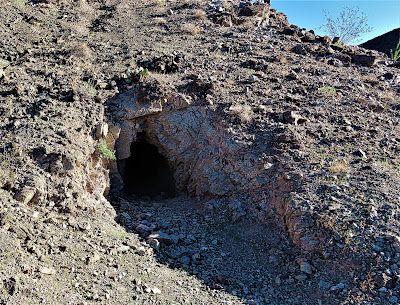 Yuma and I went about forty feet back to where the mine ended and took a picture towards the entrance. 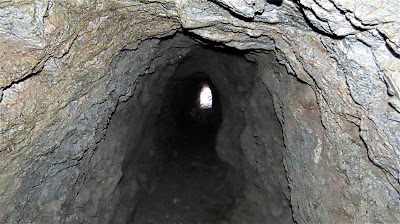 Driving further into the mountains our guide, Deb led us to this mine shaft on the side of a mountain. 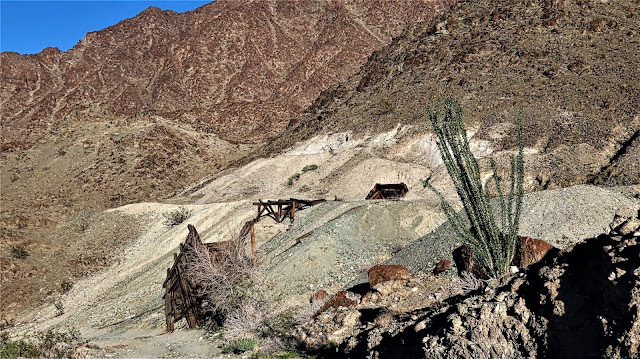 Yuma is checking it out at a distance.  This shaft goes almost directly straight down.  We aren't going into this one, that's for sure.

Look at that rickety ladder.  Been inactive for a long time.  Can't see the bottom. 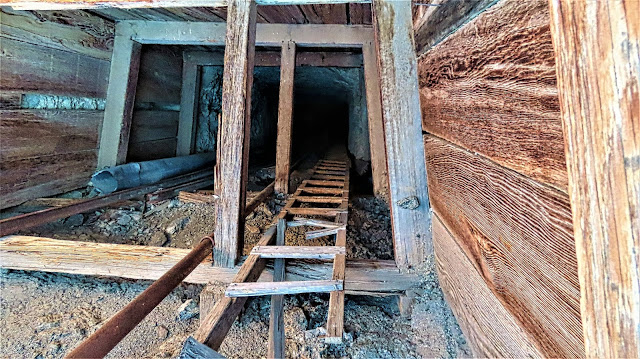 Remains of an old mining building.

It was getting on 4:30 and the sun was making long shadows, so we headed home, quickly cleaned up and met at Tom's place for Happy Hours and tonight Tom provided a beautiful bon fire.  We chatted until after dark about everything except politics.  Beautiful warm evening by the fire with an almost full moon. 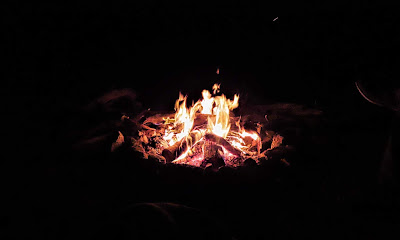 Of course, we all took pictures of the sunset.  I couldn't pick just one beautiful picture so I'll let you decide. 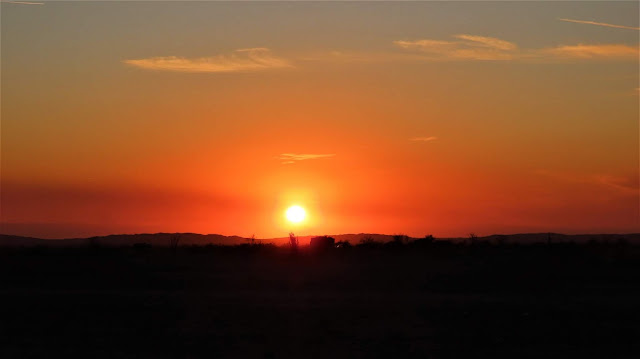 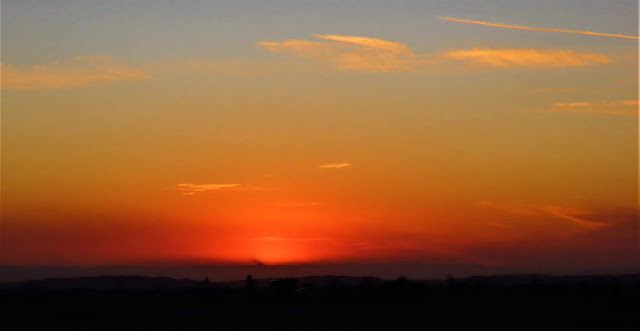 Today had everything.  Helping strangers, hunting for mines in the mountains, bon fire and especially, spending a fun time on a beautiful evening with friends.  What more can you ask for?