It was nice to wake up at 7:30 to find that it was warm and sunny outside.  Didn't stay in bed too long and by 8 o'clock I had the door and windows open.  No heater this morning.  Already 55 out and calling for near 80 today.  So nice.  Yuma love these morning walks in grasses.  I walk and he runs😀  He has so much energy! 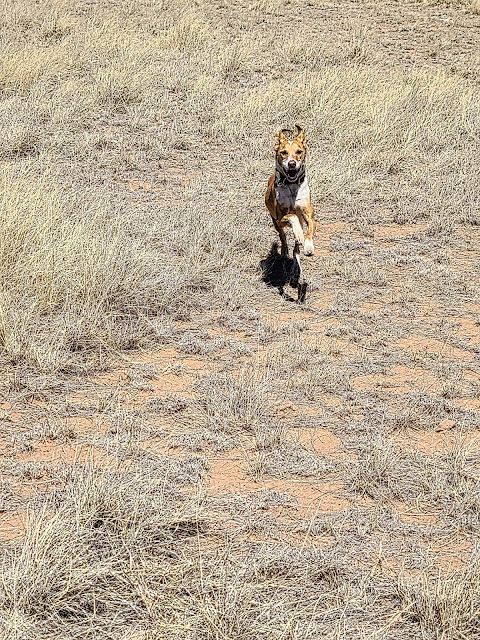 Oh!  I forgot to mention in last night's post that when I arrived at Montezuma Pass I recognized the place.  I knew I had been there before.  Sure enough when I did a search on my blog I was there on March 18, 2017, almost four years ago to the day.😁  What a memory I have!

Made my coffee and crackers and stepped over to Tom and Deb's porch for a nice easy get together.  Already had the awning out to protect us from the heat of the sun.  Sorry for the high socks Patsy😂 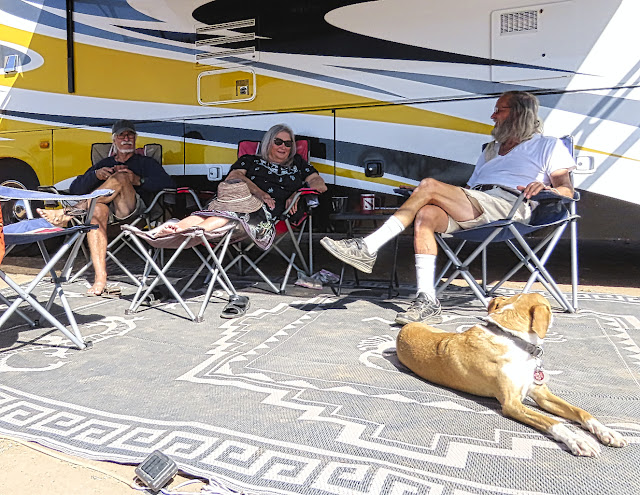 We chatted the morning away and before we knew it the time was 11:30 and we still had breakfast to make, so I headed home.

Made breakfast and while Yuma and I were laying outside eating, a man on a horse with a big dog came from the road and passed by our Jeep.  And of course, Yuma wanted to meet his dog, but evidently this dog is not friendly.  The rider yelled out for me to control my dog and of course Yuma wouldn't listen.

The horseman was adept with his horse and kept it between his dog and Yuma until I could grab Yuma.  Fortunately, his dog obeyed his master's commands and did not approach Yuma.  Just a little excitement added to my day😅 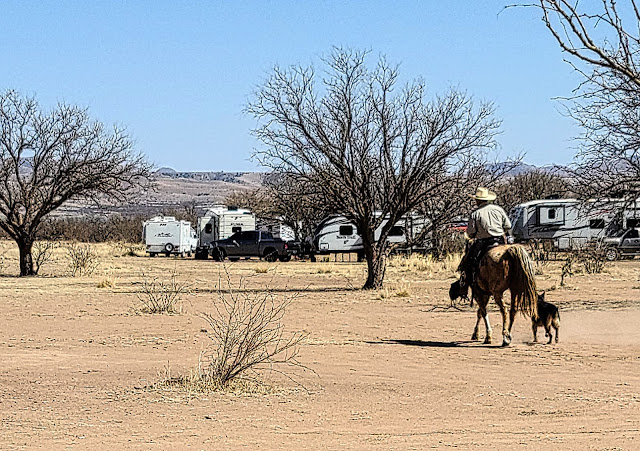 After that we took a little ride to see several Cottonwood trees I have not been to before. 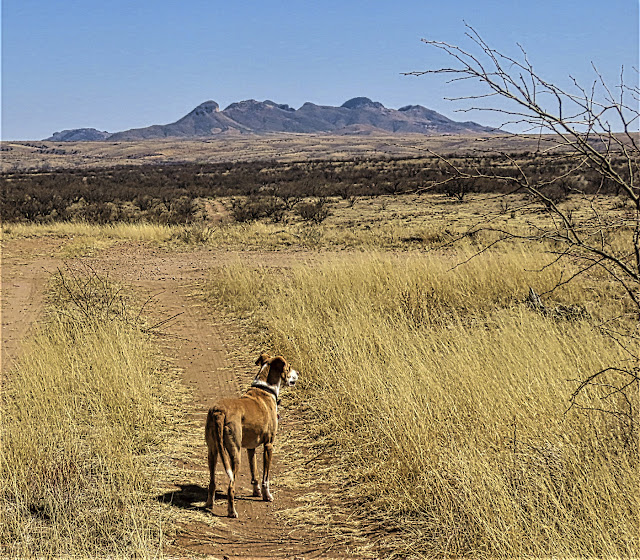 I know you've seen the Mustang Mountains many times, but just couldn't resist one more time.  Now for the trees.  They are down below in the creek bed which is completely dry this year. 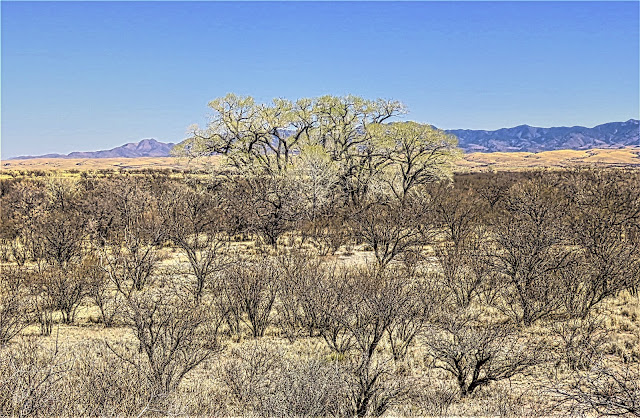 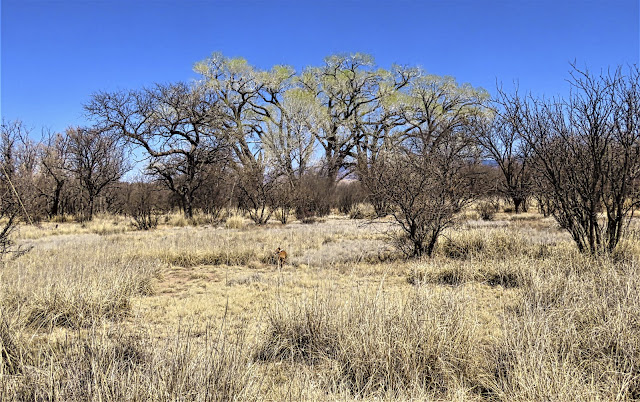 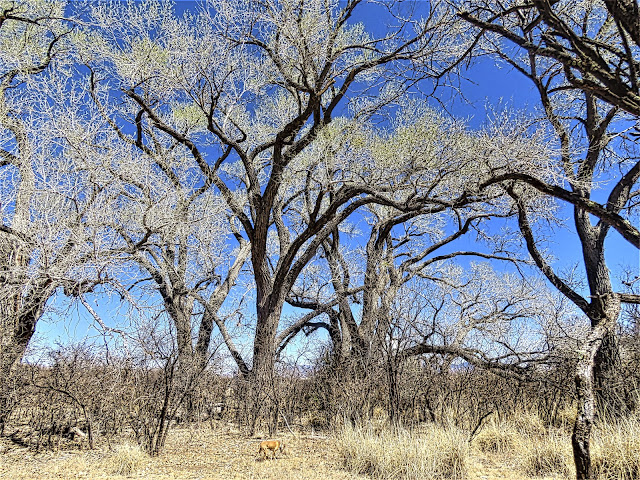 As you can see they are quite large! 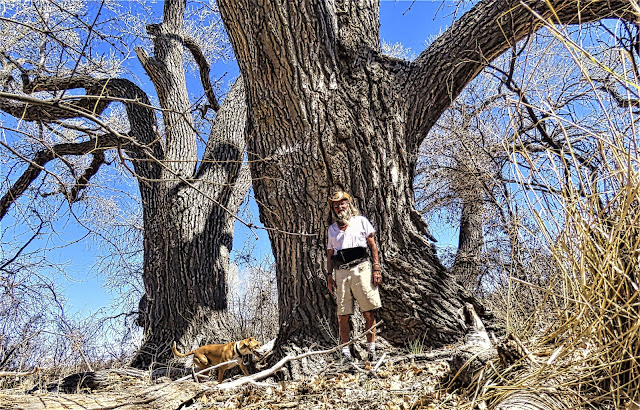 The majority of the trees are up near the Empire Ranch further west of here. 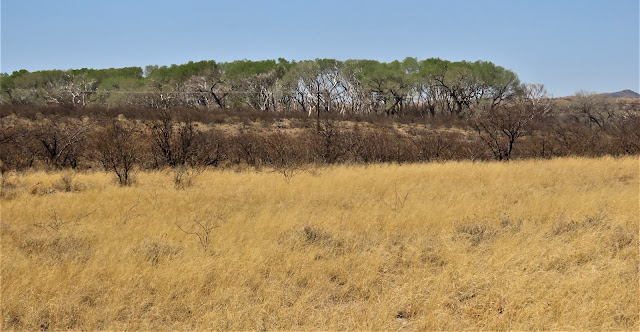 Heading back to our site, I had to turn to the east and get one more shot of the Whetstone Mountains in the distance.

Already 4 o'clock and with the DST messing up TV schedules I'm going to turn on the TV to make sure I don't miss Gold Rush.  I believe Dave Turin's Lost Mine is on afterwards and I do like Dave.
At 4:45 I turned on the TV to watch Gold Rush at 5 o'clock and I couldn't believe it was going in and out of connection.  I've been watching this darn thing all week with no problems and it does it now. 😨 What luck!  It was 5:30 before I finally got the Dish working properly and I will say I was slightly aggravated😡😭😱 But all ended good.
The grasslands is starting to get very crowded with the weekend crowd.  I see lots of 4 wheelers.  Guess we'll just watch the young working crowd have their fun for a couple of days!
After my two falls on the motorhome steps, I had to laugh at Joe Biden falling while trying to climb the steps to his plane😁  At least the world didn't get a picture of me doing it.  Ain't it great getting old!  Not politics, just an observation.
Thanks for stopping by.
Posted by Doug Laning at 10:10 PM