Woke up with the sun today and flew open the blinds to see if it snowed last night.  You'd have thought I had never seen snow before.  And sure enough there was snow!  There was a pocket of clearing where the sun peaked out and dark clouds quickly coming in.

By 7 o'clock, right on schedule the endurance riders were off and the snow was picking up fast!  They came by quickly.

By the time the last of them passed, it was snowing like mad! 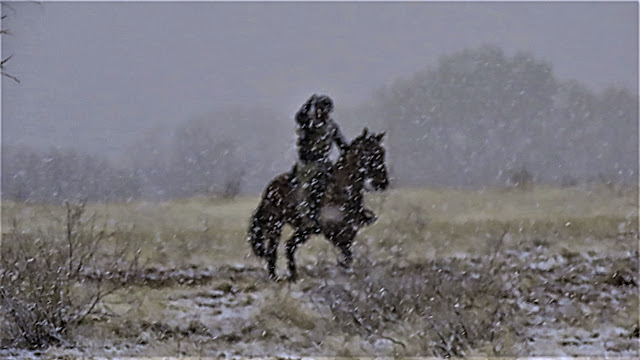 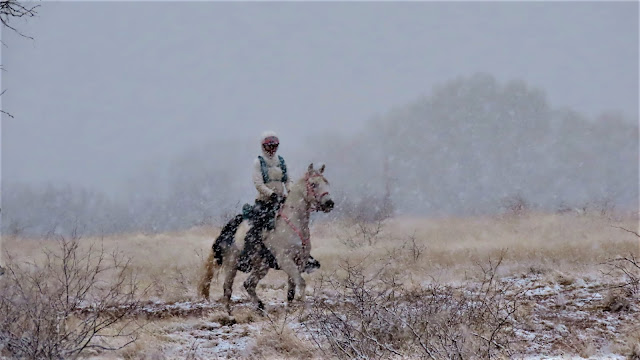 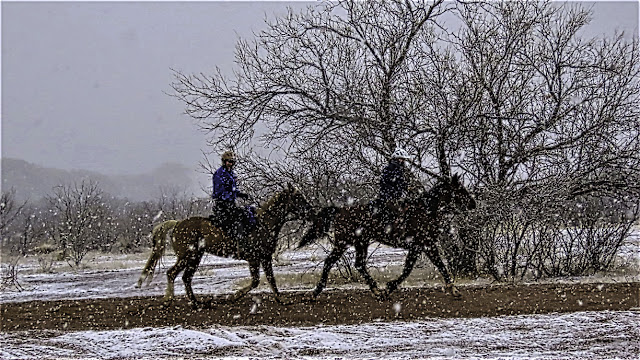 I think a few of them wondered who that crazy old bearded man was doing out in the snow in his jammies and a robe😂  While outside it quieted down and Yuma was dying to go outside, so we went out for a quick walk.  The snow didn't bother him, but the cold did. 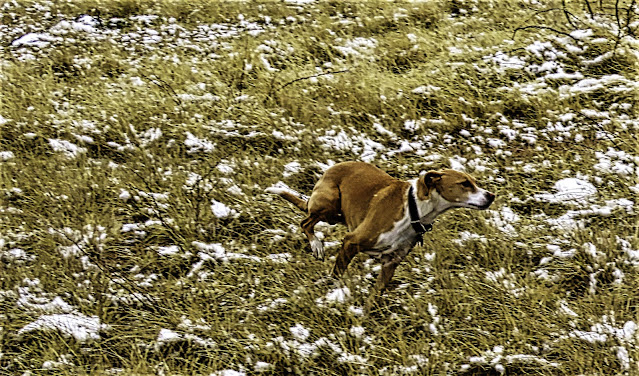 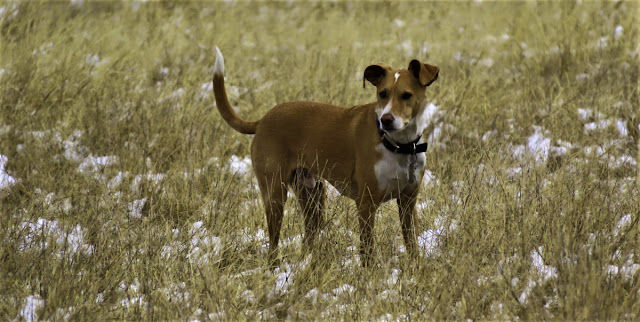 Not going wild on the horse pictures since you can't really see them, but wanted to give you a flavor of the morning's snow events.  By 9 o'clock the snow was coming down in huge flakes covering the ground and clinging to the trees. 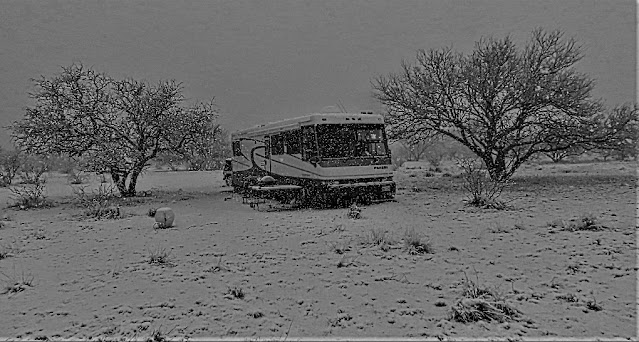 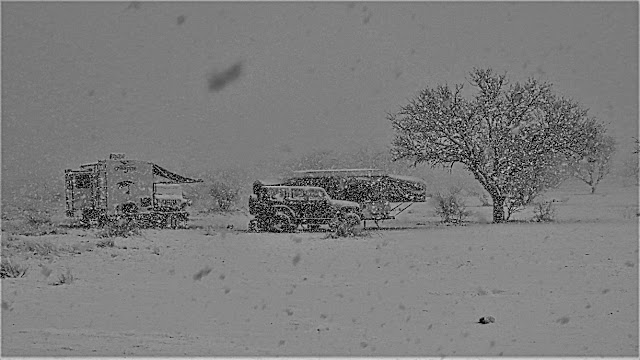 It was a beautiful snowfall even for Illinois.  Thick flakes and a slight breeze.  If I was younger I would be throwing snowballs at Yuma!  Now, I know I left home to get away from this stuff, but this is unique and thankfully less than a day's event.  I'm sure it will all be gone by this afternoon.

While Yuma and I were inside the warm White Lion, 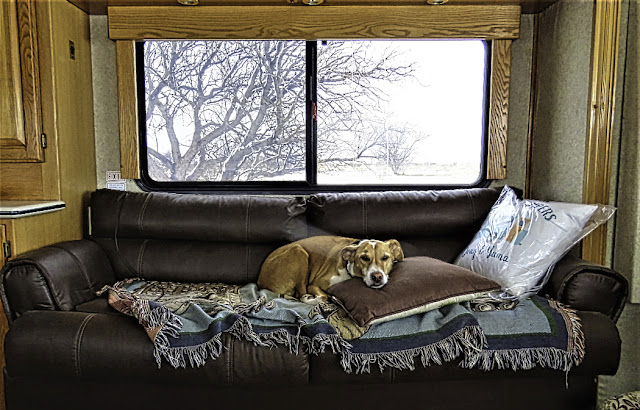 I saw a red fleck in the tree outside again and sure enough there was a red fluffball on a limb.  Actually, it went from limb to limb and I must have taken five pictures before he disappeared.  This is the best I could do.  Almost a great shot. 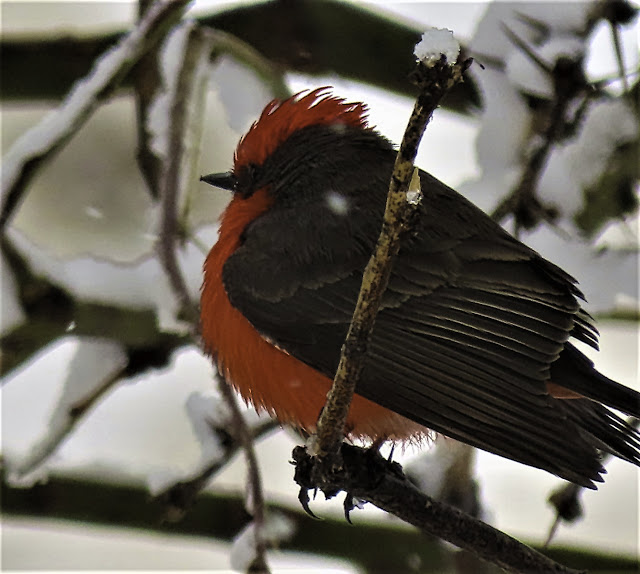 By noon as projected the snow stopped and the sun started coming out.  Not going to be a warm day by any means.  45 for a high and the winds will be picking up, so it is definitely an inside day for us.  With the dark clouds turning into puffy white clouds, the mountains started to show themselves. 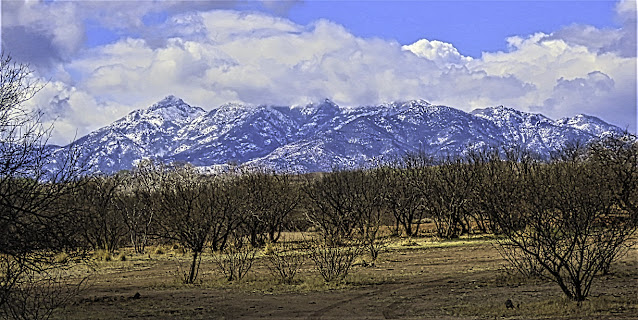 There was one more red flicker outside in the tree and this time I got the perfect shot.  No snow, but still perfect.  Cold little fluffed up Vermilion Fly Catcher in the cold wind😨 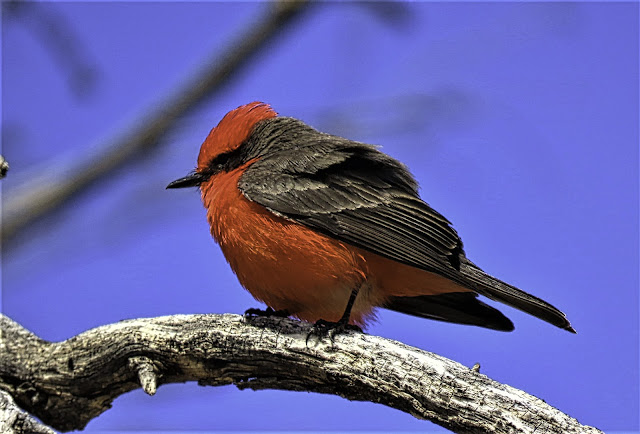 There were two groups of riders, 25 milers and 50 milers.  I think today qualified as an endurance run😀  Not going to show many horses coming in but by the time the last two came in I believe show you that it was a grueling day. 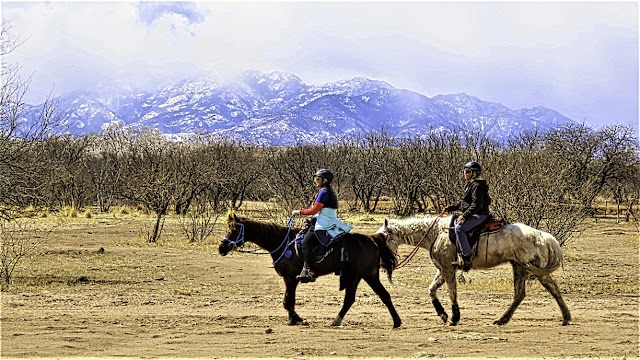 My favorite horse and rider must not have been tired because they headed back out to enjoy the afternoon view. 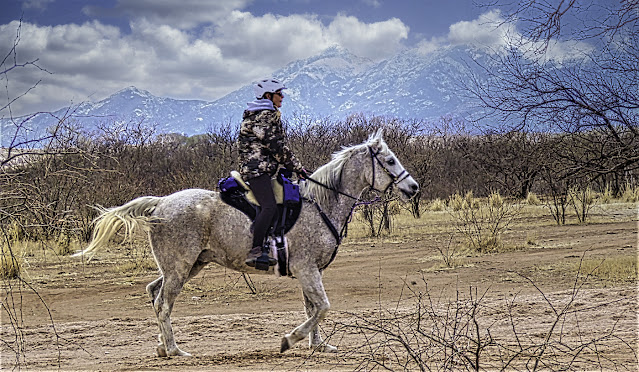 As evening approaches all things are back to normal.  The snow is gone for the season. 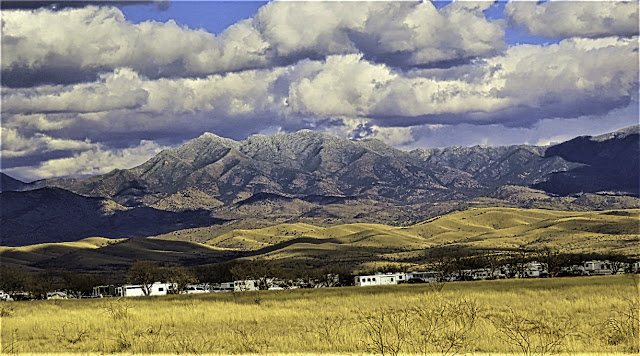 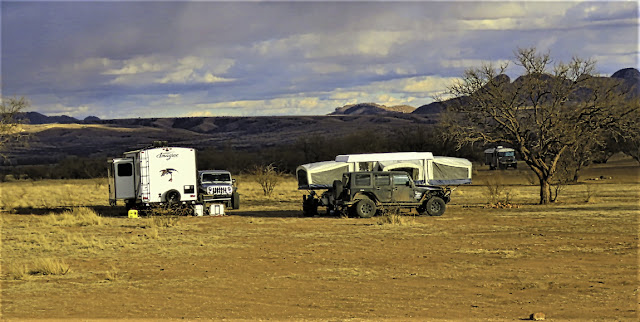 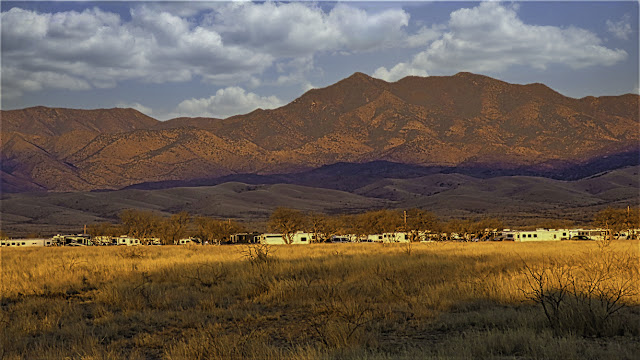 All is right with the grasslands once more.  Thanks for stopping by.
Posted by Doug Laning at 7:17 PM