An Electronics kind of day

Last night I went to sleep with inverters dancing in my head! 😃  I hope it is the last night I have to leave my generator going all night to keep my fridge cold.

Woke up early around 8 o'clock with the sun shining and no wind.  Always good.  Waited till around 9 to take Yuma for a walk and then get ready to head to RV Connection to hopefully pick up a new inverter.

By 9:30 we were on our way.  Tom, the owner was hard at work installing a satellite system when we arrived. 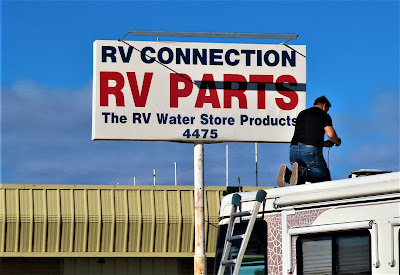 Went inside to talk to Tom's son, Jordan.  He had received a new shipment of inverters and said a couple were not spoken for so I wanted to make sure I got dibs on one of them.

We talked and decided I would work directly with Go Power on the issue with my old inverter and if they sent a new one, I would have a back-up.  If not, at least I would be up and running with the new one.

We got home at 1 o'clock but not without stopping at Best Buy for an new Visio Smart TV.  That will be a discussion for another day.

I went to work installing the new inverter right away.  Bill On Our Way  stopped over to see if there was anything he could do.  We searched for fuses that could be blown but couldn't find any, so I continued my installation.

Finally, at 4:30 I was ready to switch it on and see if there was power.  Anxiously, I peaked in the fridge to see if the light was on.  And it was 😀😀😀.   I was so happy to see power without hearing it.

Went over to the Happy Hour at Tom and Deb's place Celebrating the Dance and I was late but Shane and Cathy were still there.  Told then the good news and we chatted for just a bit and soon was time to come home to fix hotdogs for dinner.

It's been a long and hectic day for me but in the end all is well, I hope! 😧  I promised Nick and Yuma that tomorrow will be a day for exploring and not another day of running around Yuma looking for stuff.