Short move to the Grasslands

After hearing on Friday that it would be 7 - 10 days for the part to be delivered and we have been living the life of luxury in Nancy's driveway, I decided that we should spend a week of real boondocking.  We really do appreciate Nancy's hospitality letting us stay in her driveway while I got things worked out.

We had a leisurely breakfast and then Nick and I went to Safeway to load up for the half hour journey.  Then we came back to the White Lion and watched some football, Dallas and Washington till the game was over and around 2:30 we headed south on hwy 83 to the Empire Ranch about 30 miles straight south through the Santa Rita foothills to the valley of grass known as the Las Cienegas National Conservation Area.

Last week when we drove through this area, I saw a big rig on top of a hill about two miles into the ranch land.  Today, the big rig was gone and a brand new van just like Nick wants parked there.  We drove further up the lane till it ended in a big circle.  We decided this was our place to live until we receive word our part has arrived. 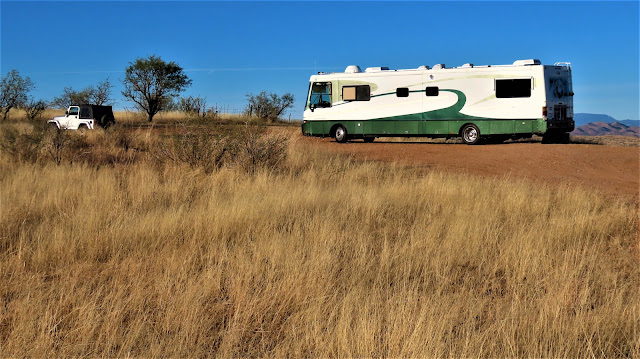 It was 3:30 when we pulled in and threw our Dish and local antenna up to catch "Yellowstone" and more football later on.  For once, everything worked right off.😀  Rough life we have here in the middle of a cattle ranch.

There was one lone calf almost old enough to be a cow on the side of the lane we drove up.  Just laid there ignoring us till Yuma and Nick walked over to see what would happen. 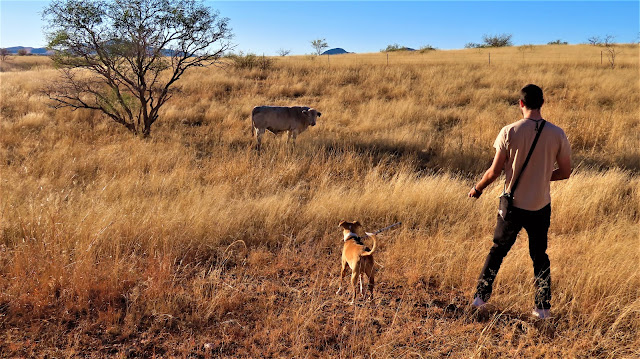 Couldn't believe it, but Yuma wasn't interested and ignored her.  That's great!  Maybe I won't have to keep Yuma on a leash. 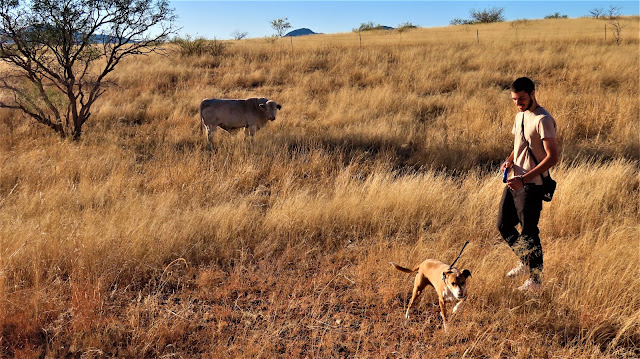 Didn't have anything but hotdogs thawed and Nick and I weren't in the mood for more hotdogs, so he had a sandwich and I had a can of heated Hungry Man soup with steak and veggies.  And of course our dessert, Tapioca pudding and lots of whip cream 😘

Here is what we see looking around our home.

We're watching the Bears playing the Packers.  Supposed to be a kill for the Packers at home, but the Bears are holding their own 35 -27 at the end of the 3rd quarter.  Go Bears!

Planning to hit the sack right after the game is over and call it a day.  Thanks for stopping by.