Boondocking with a generator

I'm into day three of no solar and I'm sick and tired of the sound of that generator.  Overslept a little this morning, so as soon as I took Yuma for his morning walk, I headed for Yuma with no breakfast.

I bought my solar set-up here in Yuma at RV Connection, so that's where I headed.  Unfortunately, they are located on the very east side of Yuma and I'm 16 miles west. 😒  Got there a little after 10 and the owner's son and part of the team came to my window to tell me they were closed for the day!

He was there waiting on a delivery of inverters from FedEx.  I chatted with him and the final say was he would contact Go Power about my broken inverter and he said the delivery would include a 2000 watt inverter I could buy tomorrow. 😊

When all is over I may have two inverters, but that is fine.  Always good to have a back-up.  Hopefully, tomorrow I'll be up and running with solar once more.

This morning was cloudy and chilly when I left and still the same when I got home at 12:30.  We stayed indoors all day and the Happy Hour was cancelled because of a cool breeze and lack of a warm sun.  It did pop out shortly before nightfall. 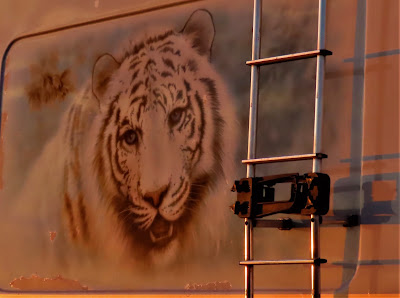 We had a quick dinner of sandwiches and our yummy whip cream and pudding for desert.  Now we're watching Monday Night football.