We're getting used to lying in bed till the sun kills the the chill in the air.  It was 8:30 when Sam called to let me know that the mobile mechanic was ready to roll, so we rolled out of bed at 9 o'clock to get ready.  Got breakfast out of the way and it wasn't long before Jason pulled up behind the White Lion. 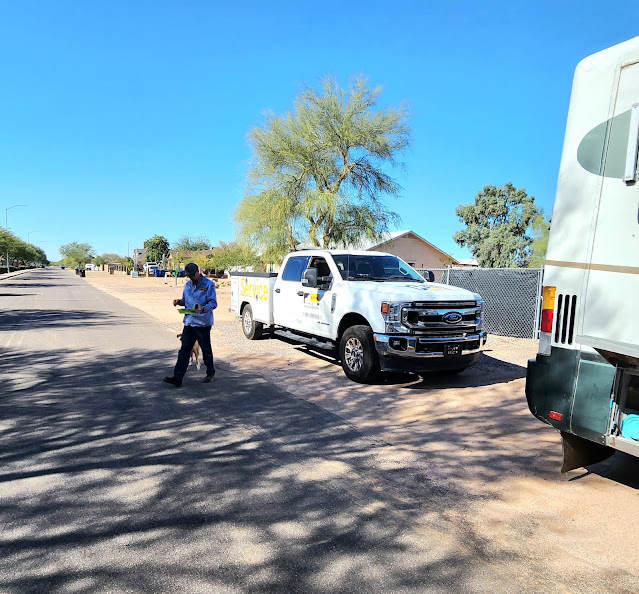 The first thing Jason had me do was turn the key to on while he hooked up his computer to the engine.  Then he pushed the Start button that is located back by the engine and would you believe it started right up.  There must be a Gremlin somewhere that just doesn't like me.

Still smokes, but it runs.  Since Jason was here, we changed the oil, replaced the same sensor just in case it was clogged but had loosened up.  Thought I would do it while Jason was here.  Three hours and $1300 later, Jason was gone.  Expensive oil change, but wanted to feel I had done everything possible before calling it quits.  He also cleared all codes so I am ready to check them when I get to Quartzsite and hopefully, no codes pop up.

We also noticed a leak had sprung in the plastic antifreeze overflow container.  Luckily, it was on top and only leaked when the engine heated up.  I put Epoxy on it and should be ready to go by morning.

In the morning, first thing, I'm taking the WL over to the tire shop for four new rear tires.  Hope it is not for naught, but I would rather spend the money than have a blow-out at 75.

Kay was busy most of the day on the phone taking care of business but she came out late in the afternoon to put up another security camera.  The only thing I did was hand things to her while she did all the work.  She doesn't trust me on a ladder. 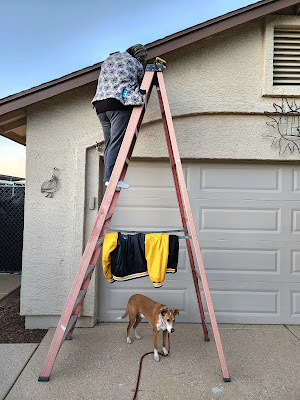 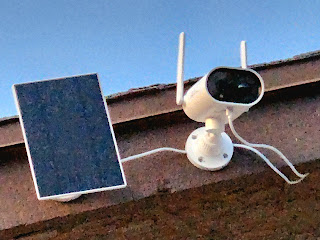 Finished product!
It was another beautiful day on the cool side.  The high was 65, but felt nice with no wind.  Had a salad, sweet potato and some baked bean with hotdogs in it.  Kay is such a great cook, I should just stay in her yard for the winter.  There is still a possibility.
Hitting the sack early tonight.  Only 12 miles to the tire shop, but it's first come, first serve, so I want to be there when they open and hopefully beat the horrendous traffic around here.  The money flows and the adventure continues, so stayed tune to the end.
Thanks for stopping by.
Posted by Doug Laning at 8:41 PM