Yuma and I had a good sleep last night with only one incident.  About 2:30 in the morning, a car alarm went off, and in my sleep stuper, I nearly killed myself getting to the window to check and make sure it wasn’t the Jeep.  When I got up around 7:30 to take Yuma for his walk, there were three cops in the parking lot talking to someone, so maybe something did happen.

It was around 8:30 when Yuma and I left to visit Deb and Riley, On a long and lonesome highway…. , in the Saddleback Mountains about 45 miles west of Phoenix.  The roads were crowded but much easier to drive in the Jeep.

It was great to get into the desert with mountains around to make me finally start relaxing.  Today was cool with only a high of 60, so we spent most of our time inside.

Riley had made up some warm vegetable soup and boy did that hit the spot.  I hadn’t eaten for two days, except for cookies, so I had another bowl.  Thank you Riley!

It was about 11 o’clock when the CAT shop called with news.  Not good news, but not bad news either.  Sam, the supervisor told me there was a large amount of blow-off.  He asked how the White Lion ran going to his shop and I said other than being a little hard to start, it ran normally the 26 miles to the shop.  Only problem was the smoke.

His suggestion, as several of my commenter’s mentioned is to put in some really good additives to the fuel and oil and spend a couple of days running it hard and see if the rings loosen up and the smoke goes away.  He said the other possibility is one or more of the rings are broken and that would be a 20 plus grand solution, so not an option.

At least I had it checked and know there is either a cheap and easy fix or it dies and then I have to make some decisions on how to sell it.  After about two days of driving around and it is still running and hopefully with less or no smoke, I will head back over to Saddleback Mountains and just go through my winter travel routines.

About 1:30, just before leaving, the sun came out and the wind dropped to a breeze, so Deb, Yuma and I took a walk up toward the mountains.  First time I’ve been able to really relax and enjoy the real reasons I come to the southwest:  The solitude of the desert and mountains. 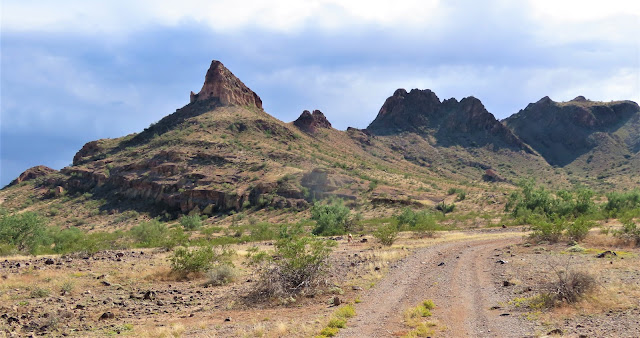 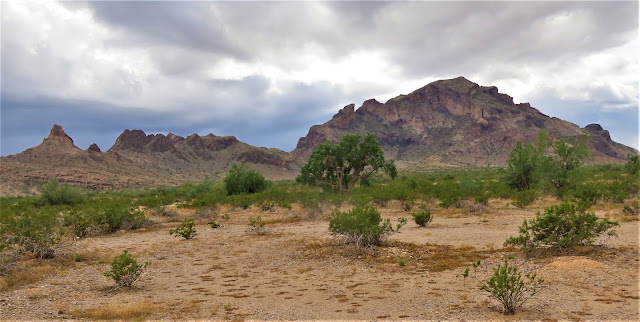 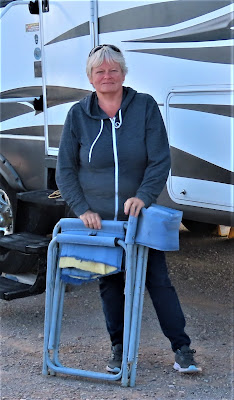 Soon after getting back to the hotel we ran to Wendys and got big sandwich, fries and a coke.  Don’t want to lose any more weight.
Just at dusk, I took Yuma for a walk on the grass near the pool and as I was sitting at a chair next to several palm trees, I could hear birds making a racket above.  I looked up and finally I saw one of them and there were a couple of small parrots talking to each other and flying from tree to tree.  Won’t see that in Illinois.

It's after 8 o'clock and time for me and Yuma to relax and get ready for bed.