Woke up at 6:30 and did not turn over and go back to sleep like yesterday, even though it was dark and quite chilly.  Did my games and was ready for the sun.

Yuma could tell something was afoot.  He watched carefully as I finished putting the remainder of the stuff in the WL bays and finally took down the flag and put it away.

Deb and Riley were ahead of me, so while I hooked the Jeep and had breakfast, they took their morning walk.  It was 9:30 when they returned and it was time to turn the key in the White Lion and hope it roars.  With a little white smoke, he came to life very quickly and it was then I knew Yuma was in our sights.

We headed south on Highway 95 for the 65 mile road trip to Yuma.  We didn't get 10 miles down the road till we hit road construction.  It was one way with a lead truck and he didn't show for at least 20 minutes.  Finally, the traffic from the opposite direction showed and we were on our way.

Everything went fine.  The WL ran beautifully and no overheating issues.  No engine warning lights either.  We stopped at the big guns at the Yuma Proving Ground.  I actually cut the engine off with confidence it would restart. 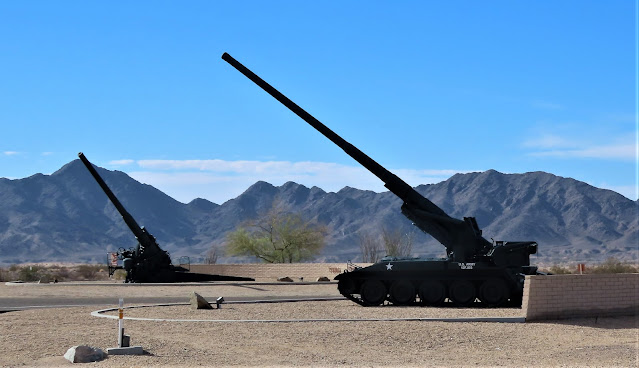 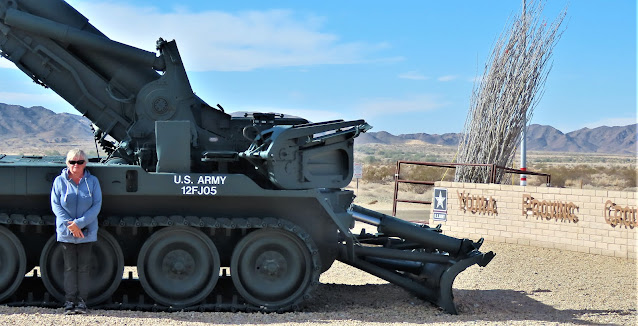 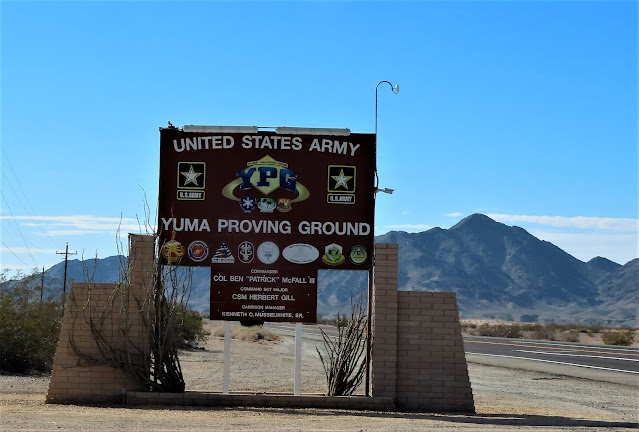 We said our goodbyes here and we both went to our selected boondocking locations in California, just west of Yuma.  I stopped at a truck stop before going into California to buy diesel and fill the propane tank.  Much cheaper in Arizona.

I pulled into Pilot Knob in California for water and to dump tanks.  Got tanks emptied for $10, but they had no water.  Still have 35 gallons, so will worry about water later.

We arrived at our camping place at 12:30 Arizona time.  I'm going to remain on Arizona time while here.  There were only two vehicles in the BLM, neither an RV.  When Yuma got out he looked around for Deb and Riley.  We pulled out a few things, but I will wait till tomorrow to set up camp.  We were starving, so had a quick lunch and just took a rest.  For some reason, driving tires me out.
Yuma wanted to check the area out so we took a walk as the sun settled over the Imperial Sand Dunes just to the west of us.

We were soon inside eating a little dinner and then turned the TV on for the Monday Night Football Game.
Thanks for stopping by.
Posted by Doug Laning at 8:47 PM