Woke up with the sun again today.  It is rising later each day and finally it is up with my waking habits.  It was 37 degrees outside but no wind so I didn't notice it inside the White Lion.  I stayed in bed doing puzzles till it had warmed up enough to put the coffee on and start my day.

We had our breakfast and Yuma, me and Deb were just ready to get in the Jeep for a 20 mile drive on Jeep roads around the Kofa Mountains, when a blue GMC truck started coming our way.  Deb asked if I was expecting company, and I said I wasn't.

Yuma ran towards the truck and soon the truck stops nearby and a tall thin man jumps out of the cab and said "I'm a park ranger!"  I knew he wasn't.  Dressed in shorts, bright red shirt with a blue truck.  To my surprise, he introduced himself as Ivan.  Deb, On a long and lonesome highway.... knew who it was because of the blue truck even though she had never met him.

It took me a moment to realize it was "the Ivan" that has been on the road forever and has posted since the days of Al of Travel With The Bayfield Bunch back in 2007.

He has been staying south of Quartzsite for a week and knew we were here, and finally figured out where we were staying and came by to say hello.  A few minutes later and we would have missed him.  Ivan, Roadtrip, said he met me at a Bloggerfest back in 2015, way past my memory banks and had followed along on occasion.

We talked for a long while until, Ivan had to run into Quartzsite on errands and Deb, Yuma and I hopped in the Jeep for ride in the desert.  Some folks may think a desert is just sand.  It is, but a lot of things grow in it and of course there are pretty mountains.

The weather was beautiful with only a slight breeze for a cooling affect in the hot sun.  We went from blacktop to any high clearance vehicle to 4-wheel drive vehicle recommended. The views were really great, so I may have too many pictures because I couldn't figure out which ones to leave out. 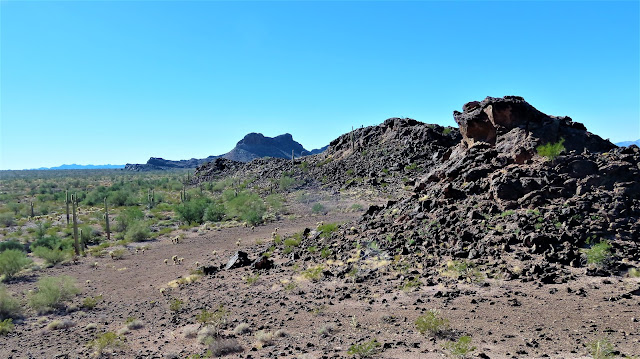 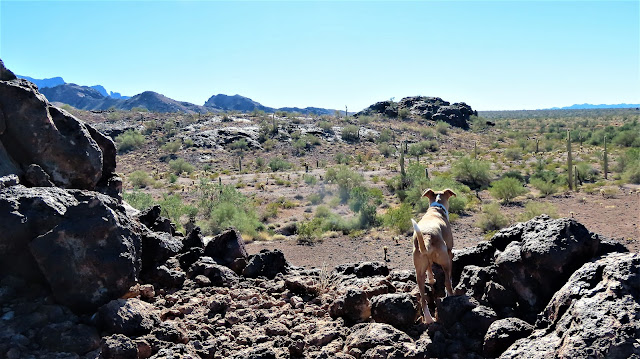 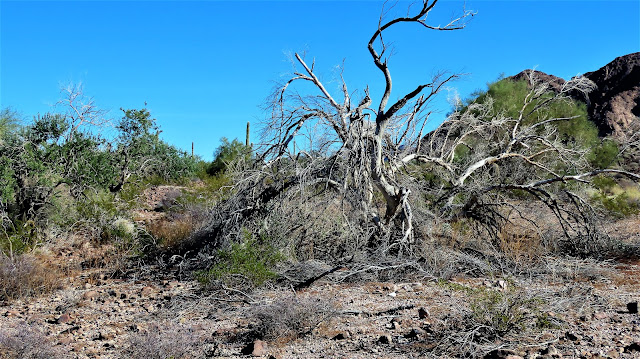 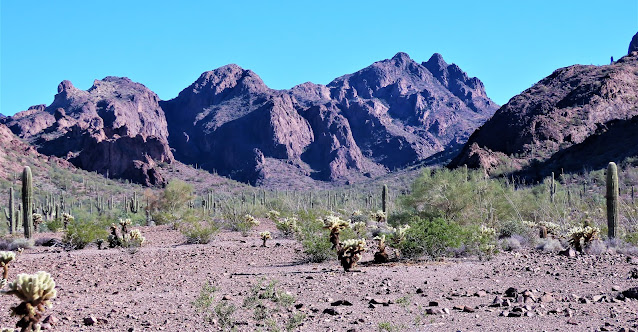 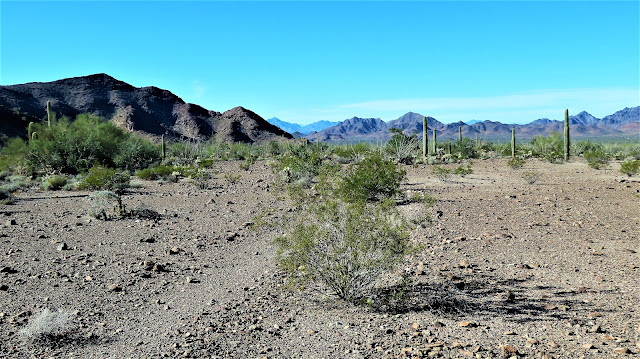 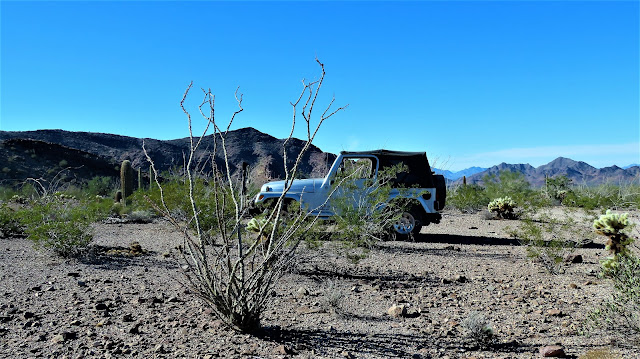 As we neared the halfway point of our 20 miles or so of desert road, it did start to have quite a few washes we had to navigate.  On one particular wash there were large boulders.  I hit one so hard I thought I bottomed out and was stuck.  One side was on boulders and the other side was in sand so I was spinning a tire and going nowhere.  Deb got out and moved several big rocks to help.

I finally put the Jeep in low four-wheel drive and it finally crawled its way up the other side.  I thought for a moment things were going to go sideways miles from any help and no cell reception.  I think it was only the second time I moved to low gear. 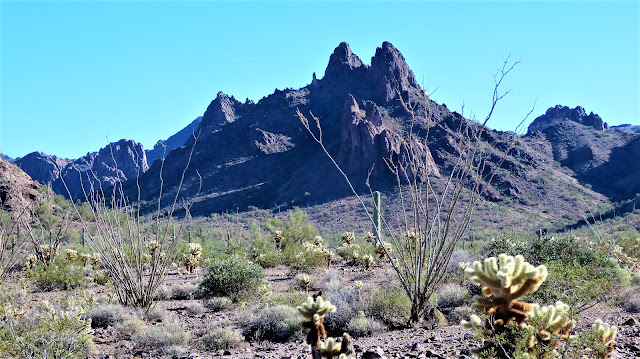 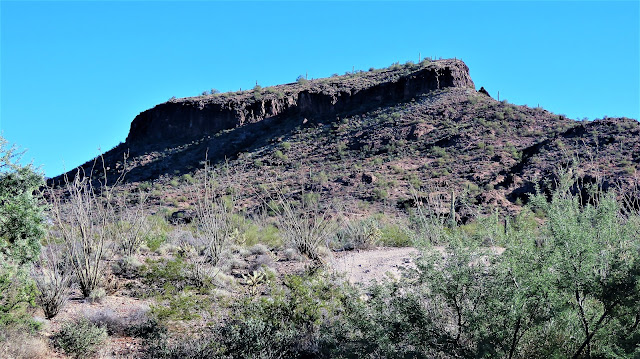 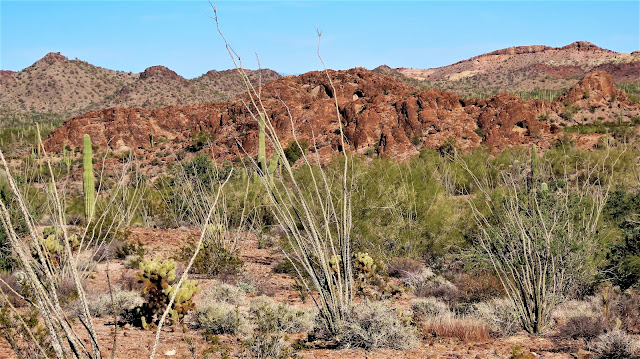 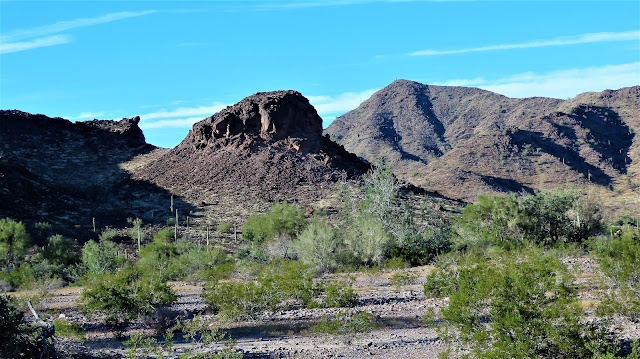 As we were nearing highway 95, we ran into Ivan coming the opposite way.  He had been in town all afternoon and lives just back a little way from where we had just driven.
Finally made it home at 4:30, a little saddle sore, but glad to be home.  I immediately went inside and warmed up four pieces of pizza and Yuma and I gobbled it down.  I'll save the last two pieces for lunch tomorrow.  Didn't want to over indulge like yesterday.  Time to finish my post and call it a day.
Thanks for stopping by.
Posted by Doug Laning at 8:55 PM