Last night I received a copy of an email that Evan sent to the business that he is working with to get a new CPU for the jeep.  Basically, he was asking that if they did not have one available now, he would like a refund and the old CPU back and he would go elsewhere to get one.

I am hopeful that he gets an update very soon and not just silence.  Just have to keep my fingers crossed and hope they are honest folks and will do the right thing one way or the other.  I am not stuck on leaving on the 25th, so I am not going to fret.  It will be resolved somehow.

Was scheduled to work for one day this week, and today was that day.  Went fast and enjoyed driving around town delivering parts to the shops.  They don’t have the schedule up for next week, so don’t know if today was my last day of work.  I set my resignation date for the 22nd, so may work one more Wednesday.  Hope I do work, so I can say goodbye to the mechanics I deliver too. I have gotten to know some of them fairly well these past six years.

Worked till 2 p.m. and came home for some lunch.  It is nice out today, around 60 degrees, so after lunch I got the ladder out and climbed to the roof 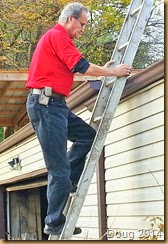 to clean leaves out of the gutters. 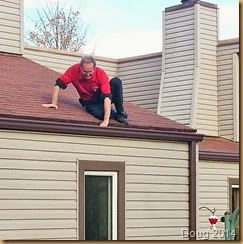 Going to rain tonight, so wanted to get it done for the second and hopefully last time for this fall.  Most of the leaves are down now.

I checked the status on my new camera, and it is supposed to be delivered this Friday.  Going to be a beautiful sunny day on Friday, so I will be playing with it to learn how it works.

Dolly and I played Gin Rummy tonight and I beat her handily.  Then watched my favorite show, Survivor.  I have been watching this show since it started.  I like to see the locations and the interaction between the people.  Interesting how people think and act when in a “secluded” environment.

My problem was, I couldn’t remember what ID and password it was setup under.  After playing around and not getting anywhere, I called my pc guru son, Jim.  He helped me set it up originally.  With his help, discovered that the account was originally setup under Dolly’s email ID and not mine.  Luckily, we both use the same password, so once we had the right ID, I was able to sign on and get to all my photos stored out in the cloud.

My brain is tired now, so time for bed.