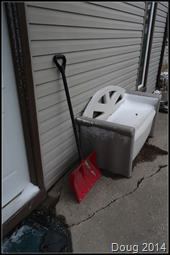 I lost a day of packing because of the cold and blustery day we had Monday, so I spent all day getting things packed into the MH, but still wasn’t done when the kids arrived at 5:30 ready to go.  Took me another hour to hook up the jeep and get the remaining things loaded.  I was finally done at 6:30 and we were ready to head out.  Did a final check of the lights on the MH and the Jeep and to my astonishment the lights on the jeep did not work properly.

In a previous blog, I explained how Evan figured out my blinking problem and fixed it.  But now, not only did the right blinker not work, but neither did the left one and the stoplights did not work either.  Only the night running lights worked.  It was too late to do anything about it and since most of our travels would be straight down the interstate, we decided to worry later and go now.  Besides, the MH lights worked properly, and they could be seen on the outside of the Jeep.

So off we went.  Evan drove the MH with the two kids and Kristi followed with their car and I rode shotgun. Stopped once for dinner at a Steak and Shake and once again for gas.  We arrived at the Walmart in Rolla, Missouri after an uneventful 250 mile trip.  It was 1 am and we were all tired.  I checked in with the management and we quickly settled in for the night.  It was all bodies as we got nestled into our sleeping spots.  Kristi and Evan took the bed, I took the couch, Lane took the floor beside the couch and Erin was sleeping on the table.  Both the kids had cushions so they were comfortable. 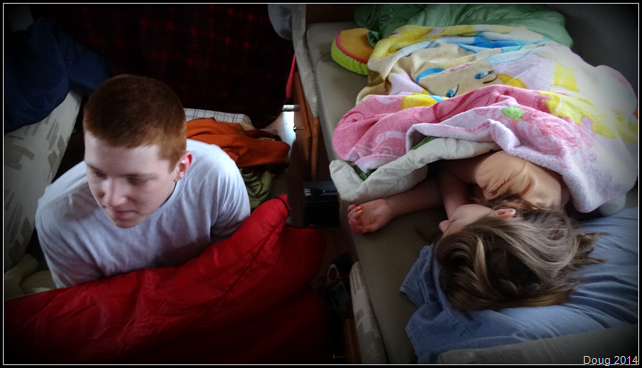 It was a very late time for me, so I did not sleep well at all.  I will finish my cold and snowy tale of the trip to Eureka Springs, Arkansas tomorrow morning.  It is now late Wednesday evening and I need some sleep.  Missed my favorite TV program, “Survivor”.