Trying to Beat the Cold

After breakfast this morning, I went out into the cool breezy air to cut more of the back yard and pick up the many leaves back there.  Did about half the back yard and called it quits and went inside to watch football for awhile.  It is supposed to get to around 60 tomorrow with sunshine, so will finish up tomorrow. 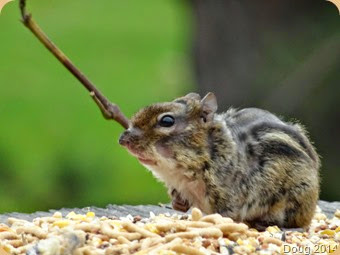 I took the screen out of the kitchen window over the sink, so I could get better photos of the birds and animals that use our bird feeder as their restaurant.  Birds were scarce, but did get  several shots of one of the many ground squirrels or chipmunks as they are called around here. 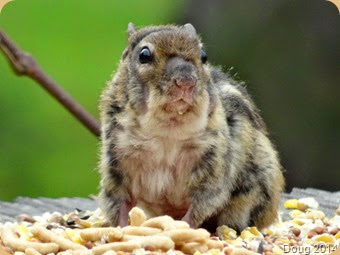 He is filling his pouches and going to his underground home to store food for the winter.

The farmer across the road is plowing his field in preparation for winter too.  Those propellers you see are two of the many wind turbines filling the landscape about 5 miles north of our front yard.  The next photo gives you a better idea.  It is a fairly large wind turbine farm with probably 50 in all. 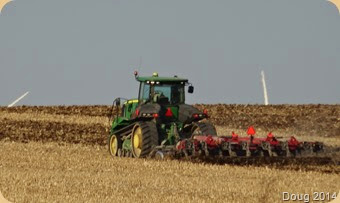 Late this afternoon, my brother, Dick called me on his Skype.  Glad to see my laptop works with Skype.  He just bought his first smart phone, and wanted to try Skype on it, so we both got to test our new toys.  I was happy to see that our connection was much better using my new Verizon hotspot.  Did not lose the signal one time.  With my AT&T connection, I was always dropping the connection on Skype.

Beat Dolly rather badly tonight in Gin Rummy.  Let’s just say 0 was a long way up from her score when I reached 500. Heh,heh, heh.

We’re watching our team tonight – Da Bears.  In our football pool, Dolly is sticking with Da Bears, but I know they don’t stand a chance, so I jumped ship and picked Green Bay.  Just heard the announcer, Chris Collinsworth say that the game was becoming “embarrassing for a proud franchise.”