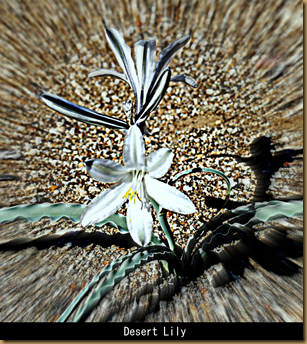 All day the Santa Ana winds have been coming down the mountain slopes into the Borrego Springs valley from the west.  As the day progresses, the wind gusts keep getting stronger.  It is quiet for awhile and then a big burst of wind will slam against the motorhome.  I feel like a sailboat on the open seas rocking back and forth.

The weather forecast calls for a wind advisory for tonight through Sunday morning.  I had hoped to be out of here before the winds came, but I guess I didn’t make it.

I think if I can just get to the Salton Sea the winds should be much less.  Will be a long 20 miles tomorrow going east on S22.  They are calling for gusts over 50 mph which could make driving a motorhome hazardous.  Will have to play it by ear in the morning.

Around noon, I decided Yuma and I would make a quick run about seven miles to Font’s Point.  Being windy, I am sure I will not get the view I would like, but at least I will have an idea of what it looks like.  I believe the link above will provide a much nicer view.  It has a video.

Drove three miles east on S22 and turned right at a wash that had a sign pointing to Font’s Point.

As you can see from the wash it is quite sandy and lots of wash board to make the drive slow and bumpy.  But we weren’t in a hurry.  I am quite used to these kinds of roads. 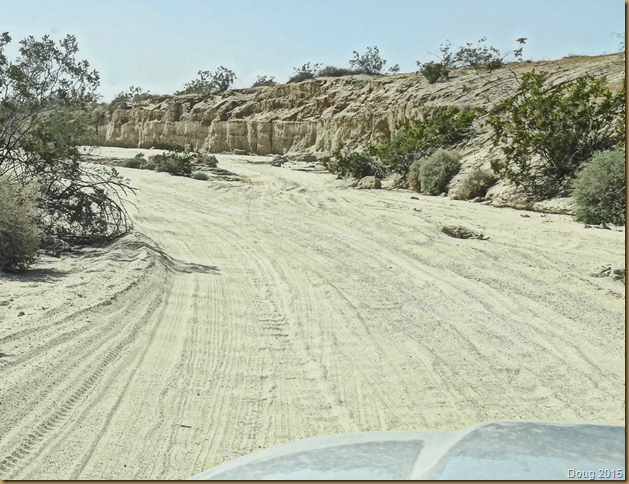 As I was driving my jeep in 4-wheel drive up this very sandy wash, I turned a corner and was shocked to see a huge 40 foot American Dream diesel motorhome.  This road has signs at the entrance saying it is very sandy and do not drive off the roadway.  But here it was heading out into the sand.  I guess he was trying to turn around and got bogged down.

I stopped and talked to the wife.  There was actually another motorhome with this one, but it was a smaller one and it had made the turn okay, but when this one tried to go through his tracks, he bogged down.

Two motorhomes and two jeeps.  One of the jeeps had a rope attached and was trying to help pull it out.  Luckily, they were from Indio, California which is only about 50 miles north of here, so they are in familiar surroundings.  And they are young people in there 30’s so they can handle the digging and anxiety involved in this endeavor.  I couldn’t really help, but did tell them that if they got out, there are many boondocking spots about three miles from them.

Said my goodbyes and went on up to the point.

I must say I was impressed with the view at the point even with all the sand in the air.  It is impressive.  All that climbing I did yesterday for a view and all I had to do was drive up here and look over the edge of the cliff.  And it was a cliff.

I was very frightened of the drop-off and would not let Yuma even get close to the edge.  No fence or anything to keep you back.  Just common sense and fear.  See what I mean? 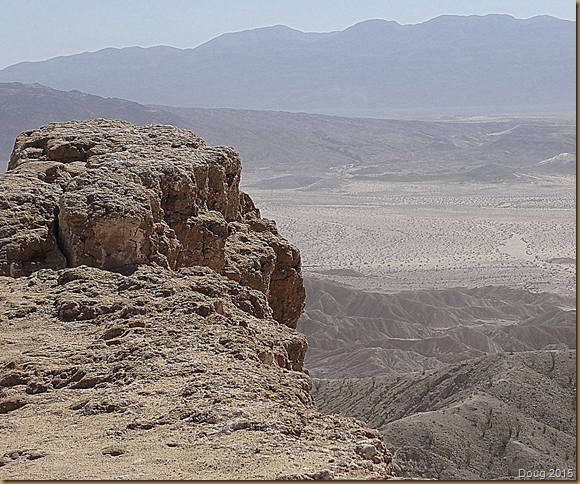 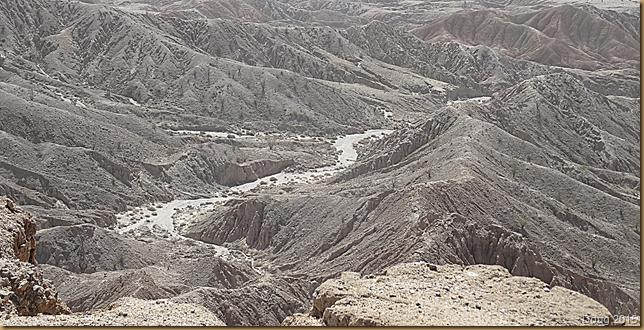 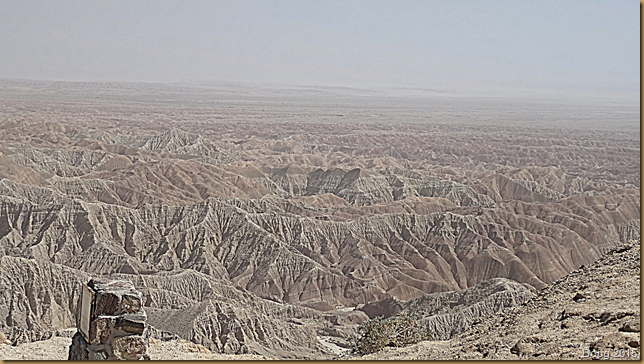 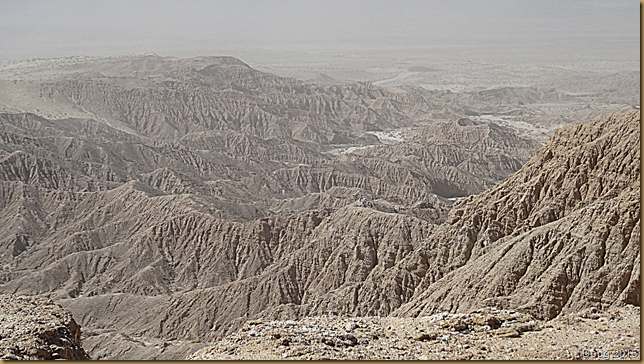 The point looks out over the desert and the Badlands around it.  They don’t call these Badlands for nothing.  Nothing can go through those canyons and ravines.  To me, they are just beautiful. 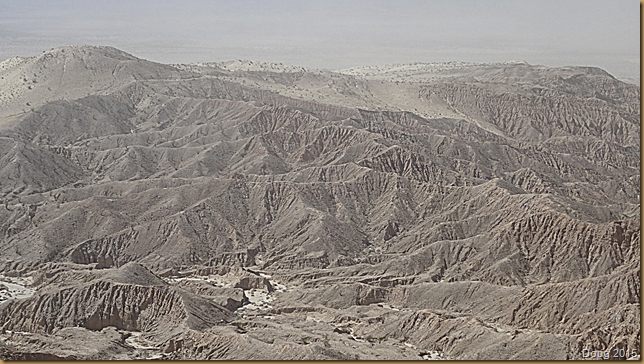 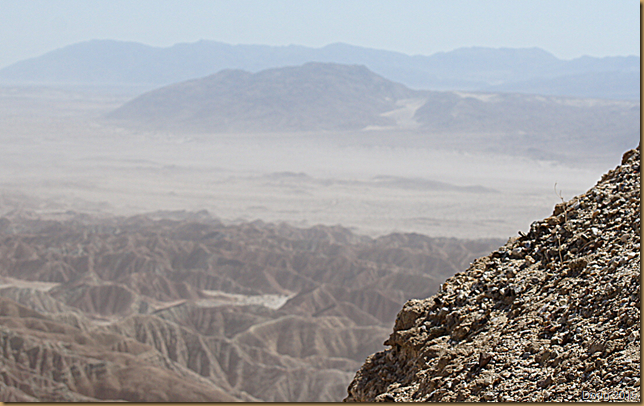 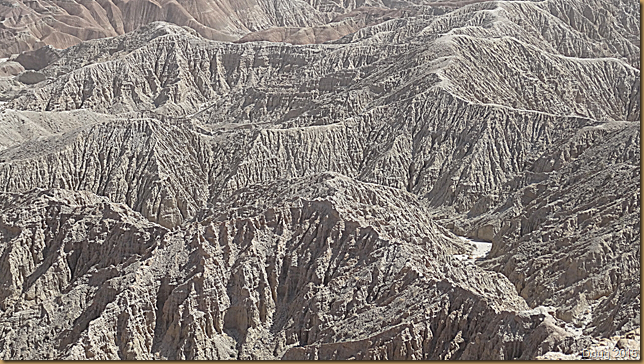 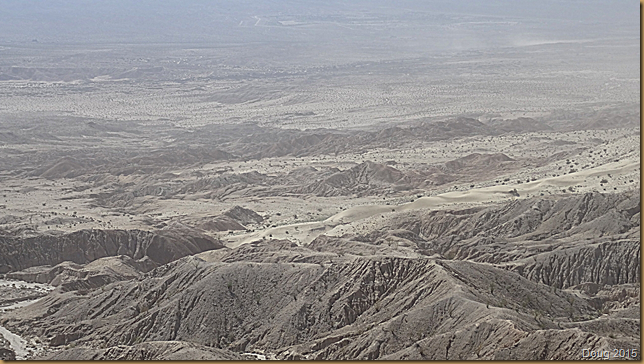 The worst of the sand was when looking west toward Borrego Springs in the valley. 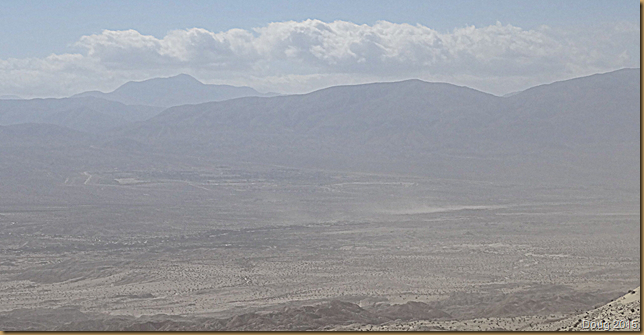 This is a photo looking to the north over Clark Dry Lake bed.  I took photos of it yesterday on my mountain climb.  Today there is a lot of sand in the air giving it a hazy look. 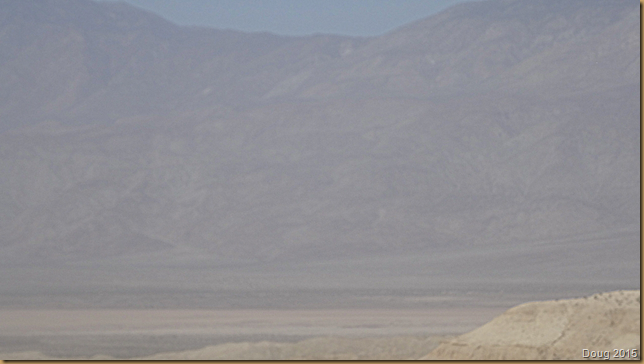 Didn’t stay long.  The wind was fierce at the point and I was eating sand every time I opened my mouth.

We came back to camp and soon after, my new neighbors invited me and Yuma over for a chat.  They are from Ontario and have been traveling to the southwest almost every year since 2007.  Very nice folks.

As we were sitting outside their motorhome out of the wind, I couldn’t believe it, but the motorhome that was stuck and his buddy, came driving by.  They parked just down the road from me.

I guess they were able to work their way out and took my advice and got out of there.   I am glad for them.  They were very fortunate to be young and strong enough to dig that thing out. 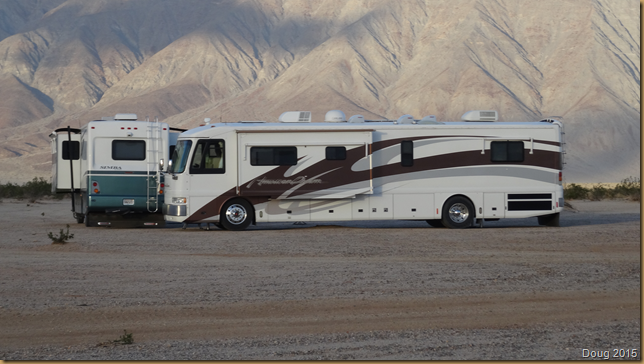 The wind and clouds over the mountains above Borrego Springs made for a beautiful sunset tonight.