Started out late today.  While Yuma and I were on our walk this morning, we walked up to the highway.  It is not far from our camp.   While standing on the roadway, I noticed a jeep road going west up toward The Four Peaks.  From where I stood, it only looks a few miles to the Peaks, but looks can be deceiving. 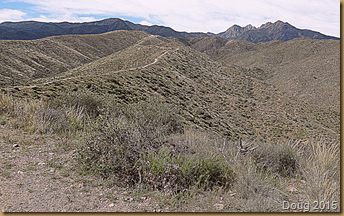 After breakfast, Yuma and I hopped in the jeep to take a closer look.  We drove up for about a mile and it was following a ridge.  It was so beautiful out,  decided to park the jeep and walk for awhile.  Maybe if we were quiet enough we might spot something interesting. (The jeep is in the upper left hand corner.)  Click on any photo to enlarge. 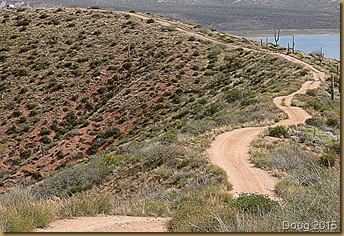 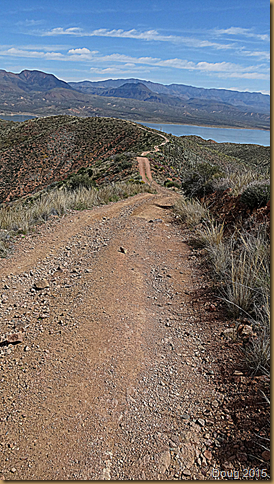 It is absolutely gorgeous up here.  No wind and no sounds except the occasional cactus wren.

We are as far as we can walk.  I can’t go any further.  And The Four Peaks still look only a few miles away. 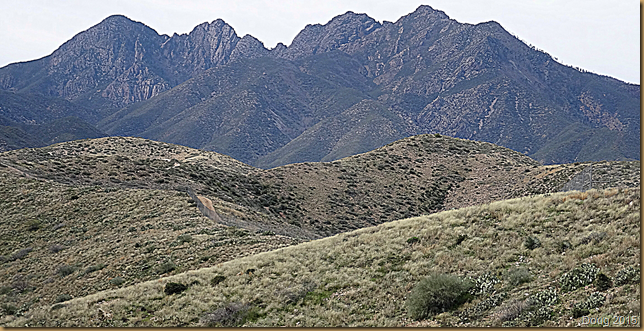 I think we must have walked two miles and all of it up hill.  Thank goodness that means the next two miles is down hill.  Should have just driven the jeep.  Didn’t see any mountain lions or sheep or anything.

On the way down, I stopped on the side of the trail to get some rest.  And while sitting there, I saw something move on the trail below me.  Took Yuma and started walking down towards it.  At first I thought it may be a tarantula because all I could see was black and feet moving up and down coming at me.

Yuma saw it and he almost pulled my arm off trying to run towards it.  Got close, but with holding Yuma back I could not get a clear shot with the camera.  It was another Gila Monster.  About the same size as the one I saw yesterday.

Got photos of him as he went through the grass just off the trail.  He did not like me following him and turned around and hissed at me.  These guys show no fear.  His beady black eyes just starred up at me. 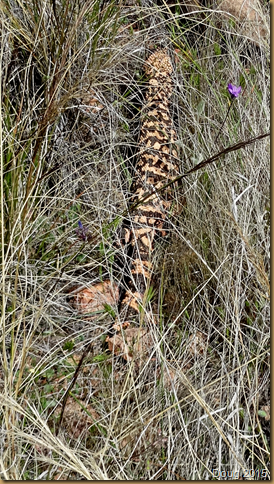 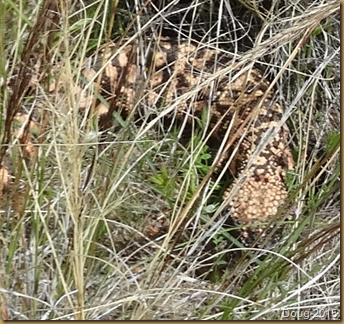 That made our walk worth while.  Two Gila Monsters in two days.  They didn’t name this county Gila for nothing.

We went back to camp and I laid down on the bed to rest I was so tired.  Wasn’t long before Yuma did the same.  Rested till about 3 pm and I got up and fixed some lunch and we decided to go to the Roosevelt Visitor Center and buy two more passes to carry us through the weekend.

While at the Visitor Center, I learned there is a cave dwelling at the Roosevelt Monument and it is only a mile up the road.  Drove up there and by this time it was 4:15 and the sign said it closed at 5 pm.  Took one photo as a teaser and we will be sure to stop by tomorrow.

There was still daylight since this region does not honor Daylight Savings time, so I decided to take Yuma for a walk up the Frazier Trail before calling it a night.  I saw the sign for this trail as we were heading for the cave dwellings, so pulled into the trailhead.

We had not walked very far along the trail when I saw a funny looking stick just ahead of Yuma, so I stopped real quick to take a closer look.  Holding onto Yuma, I walked a little closer and it was a rattlesnake in the trail.  It had just come out of the prickly pear cactus when we walked up and he froze when he heard us coming. 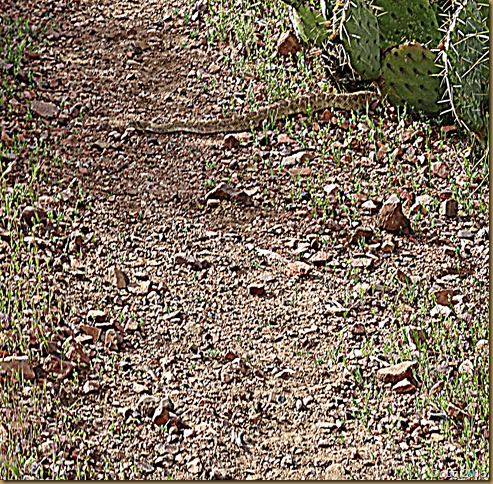 I would guess he was about four feet in length but I never did see his whole length.  Yuma never really saw him because he didn’t move, so I pulled him back and tied him to a tree, but by the time I got back to the snake, He was crawling back into the cactus.

I saw his rattles but no photo of them.  He curled up in the cactus and that is where I left him.  He didn’t bother me and I didn’t bother him.  Checked the Internet when I got back to camp and I would guess him to be an adult western diamondback rattlesnake. 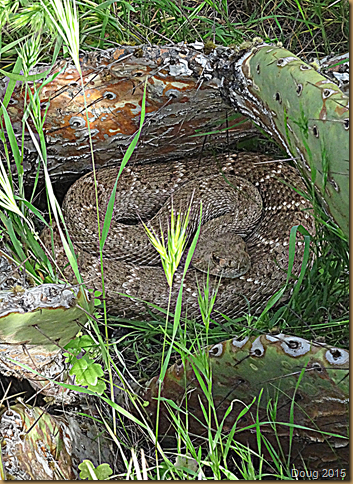 I am so thankful I was paying attention to the trail.  If not, Yuma would have walked right into him.  I think I will stay off the trails that have cactus and brush near the edges from now on and stick to the jeep trails.  And continue to keep a watchful eye out for odd looking sticks.