I wanted to get an early start this morning, because I was anxious to see how my brakes were doing on my motorhome.  With no breakfast, we packed and were on the road by 7:15 am. 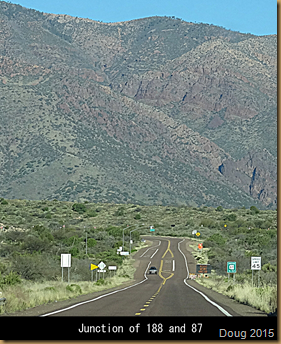 Drove north on hwy 188 for 30 miles along the Roosevelt Lake through the Tonto Basin until we reached hwy 87.  My first decision was whether to go back down the mountain to Mesa and have my brakes checked or go north to Payson and see how the brakes handle.  My old “never turn back” philosophy kicked in, so I headed up the mountain to Payson, Arizona.

It was only 15 miles to Payson, but it was an all uphill 15 miles to Payson.  The motorhome did fine at about 35 – 45 mph during the climb and our reward for doing this was a stop at McDs.  Hadn’t had a McDonalds breakfast for ages, so I sprung for Yuma and me.  I had the Egg McMuffin meal and Yuma had a sausage sandwich.

It was while I was parked at McDs I learned a vital piece of information about downshifting when going down hills.  I was talking to a man that had lived in the area all his life.  I asked him about the roads to I-40 and hwy 60 from Show Low on eastward.

I was telling him about my harrowing 5 mile downhill experience on hwy 87 from Mesa.  I told him it didn’t seem to help when I put the truck in 2nd gear because I couldn’t feel the engine pulling and I couldn’t tell the rpms without a tach.  He said be sure you take the motorhome out of overdrive.  Overdrive!  I had forgotten all about the Overdrive button on the steering column.  What a dummy! 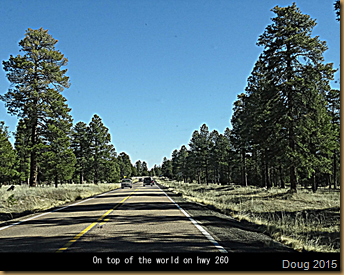 After breakfast, we headed towards the town of Heber, 32 miles along the Mogollon Rim on hwy 260.  We were now on top of the world at about 6000 feet and it was beautiful.

We had one long uphill climb after Payson to the 6000 foot level and during the drive there were a couple of 6% downhill runs.  When I turned off the Overdrive, the engine in the motorhome would start pulling and slowing us down.   It worked great!  Lesson learned.  I am now a motorhome mountain climber. 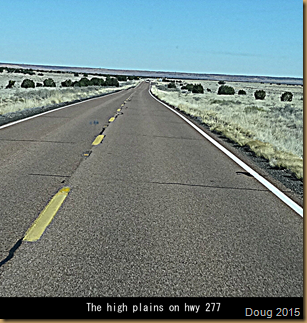 The reason I’m thinking I-40 is because in my blog comments yesterday, Al from Travel with the Bayfield Bunch mentioned that if I was in northern Arizona, I should check out Canyon de Chelly.  If I went north to Holbrook and jumped on the I-40, I would be heading right for the turn-off to the Canyon.

Since I really had no reason to travel hwy 60 and I still don’t trust my brakes, I decided to head north and stay a few nights at the Canyon de Chelly and check it out.  Thanks Al, for telling me about it. 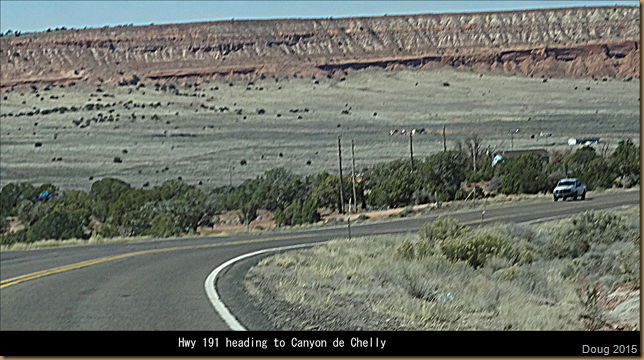 After a 7 hour drive, Yuma and I are now staying at the Navajo Indian Reservation in the Cottonwood Campground for $14 a night.  No water or electricity, but they do have bathrooms.  It is a nice campground and not too crowded.  The big plus is that it is located right at the entrance to the canyon just outside the town of Chinle, Arizona on hwy 191.

I will not be publishing my blog for the next few days because I am using a network other than Verizon and they restrict my data.  So, I will write them and prepare the photos, but not publish until I am back in civilization.