Yuma is adjusting to his new home and family.  I can tell he has become spoiled being with just me and living in the small area of the motorhome.

The first time we left him alone to go to the store, Yuma ransacked the kitchen.  He knocked over Dolly’s rocking chair in the kitchen and knocked over several plants and just in general made a mess of things.  Nothing serious, but we could tell he did not like being left alone.  We now put him in an empty bedroom and shut the door when we go somewhere and that seems to work okay.

We have three older cats and Yuma has been cordial around them.  He has been home for a little over a week now and gets along with them okay.  Pretty much, he leaves them alone and they stay out of his way.

As for Fergie, she still wishes he would just go away, but she is slowly adjusting to the fact that Yuma is permanent.  She still barks at Yuma from the safety of Dolly’s lap and she will not get on the floor yet.  But, she is used to being carried everywhere anyway.

He thinks he is a small dog like Fergie.  He always wants to climb in my easy chair with me and sleep in my lap rather than on the floor. 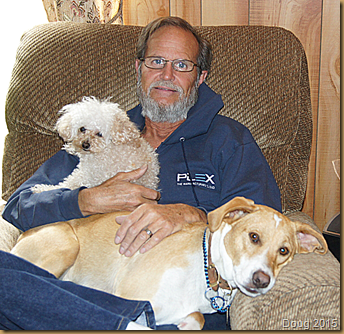 Yuma and I have been taking walks up the road along the empty farm fields several times a day.  I still keep him on a leash during our walks.  The weather since I have been home has been horrible.  Today finally feels like spring.

I took Yuma to the back yard and let him play with his favorite toy today, and he had a wonderful time running at a hundred miles an hour and throwing the toy all around the yard.  He just loves being off his leash.  He certainly didn’t need me to throw it for him. 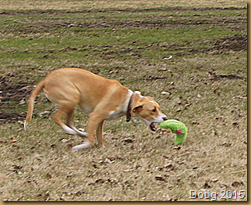 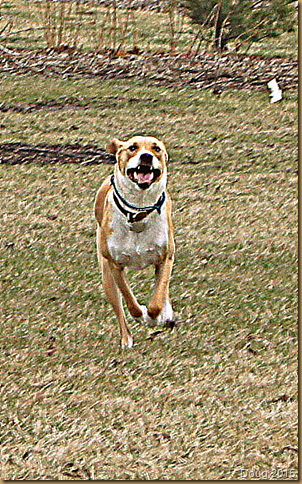 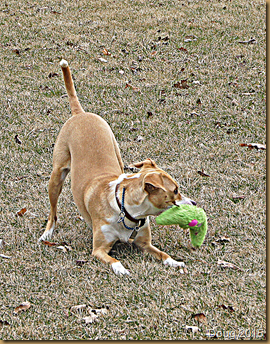 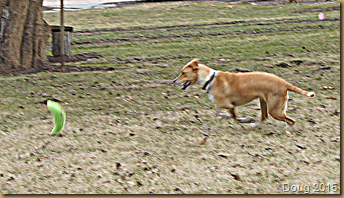 There are two dogs behind an electric invisible fence to the south of us and those two dogs bark at Yuma.   He met them the first day we got home.  He just looks at them, but does not bark or try to run after them.  He is a very smart dog and knows I don’t want him to chase after them.

Yuma has become very attached to me and I am certain he will not run off.  Still nervous about the first rabbit he sees when off leash,but I feel certain he will return.  Yuma and I are the best of friends.