Christmas Eve was a busy day for me, starting with being booted out of my camp at Mittry Lake because of the fire and then my long day’s hike up Castle Dome Rock.

About 7am I was ready to leave for my hike. I was supposed to meet Stu at 8am.  Looking south at sunrise I could see the smoke from the fire.  Not sure I will be able to return to my campsite today.

I knocked on the door of the camp host and explained why I was there and he told me I was in a long term RV park and could not stay unless I paid $40.  I asked him where I could stay for the day, because I had an important meeting at 8am.   He told me that I could park the RV just outside the park in the day fee area of Senator Wash for $10.  Because, I didn’t have time to quibble, I parked on the lake, put $10 in an envelope and put it in the box and left it there for the day.

As I passed the burn area, I grabbed a photo of the burn.

I got to the meeting place at about 8:30 so wasn’t too late.  I had met Stu Clow on Tuesday when I was going up to check out Castle Dome close-up.  Stu is from British Columbia, Canada and is a retired Canadian Park Ranger.  He has spent his whole life hiking through mountains all over the world.  This is his third year coming to Yuma in his travel trailer.

Once we passed the museum, the road starts to get a little dicey but not bad. 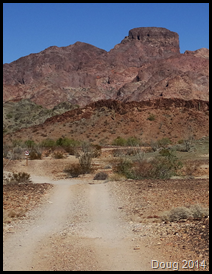 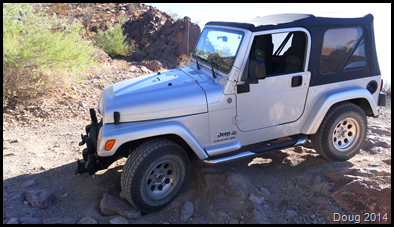 There was one place I had to put it into 4 wheel drive.  We finally arrived at the stopping point to begin our hike at about 9:30.

The first hour was through a wash that had plenty of soft sand and rocks. 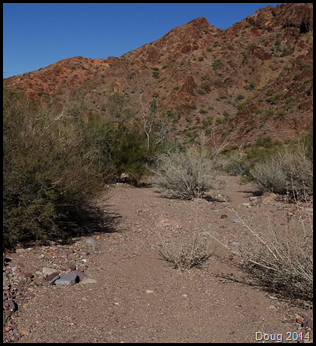 Here is the important arrow pointing the way to start up the mountainside.  Stu had missed this arrow on a previous attempt and followed the wash instead.  By the time he had figured it out it was too late to go further. 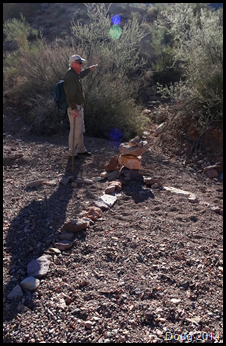 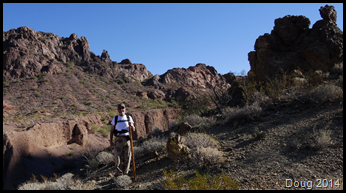 The day was gorgeous.  Slight wind, high around 70 and not a cloud in the sky.   This is a view looking back as we made our climb. 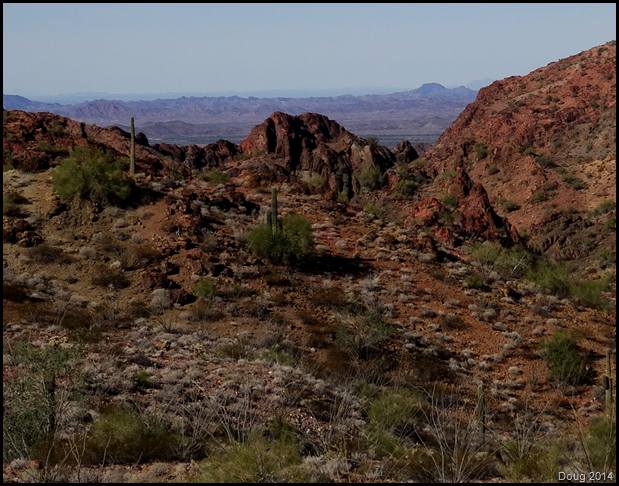 The entire climb was nothing but up with loose rocks.  It was slip slide the entire way.  I have never been so tired and sore.  Stu, of course was used to this and patiently waited for me to catch up as we went along.  This looking up into the morning sun at the Rock. 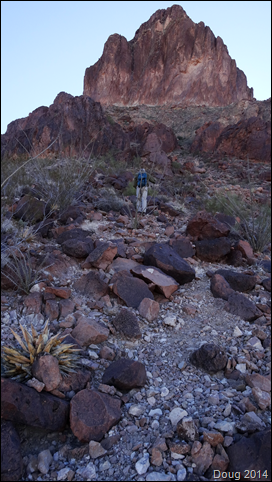 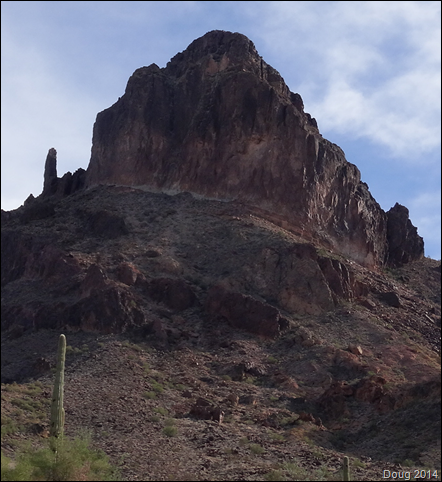 After about 2 hours of climbing and looking around, we were as high as all the mountains across from us.  You can see the wash where we started way down below. 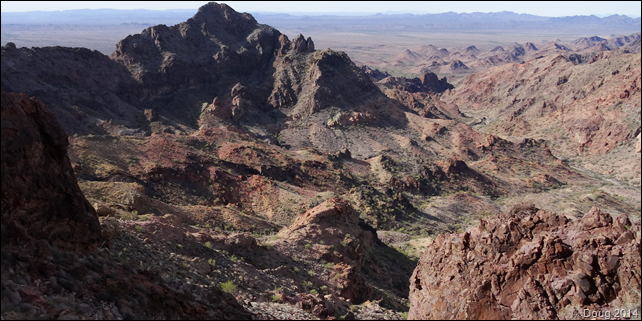 This photo gives you an idea of the loose rock we were faced with all the way up and all the way down. 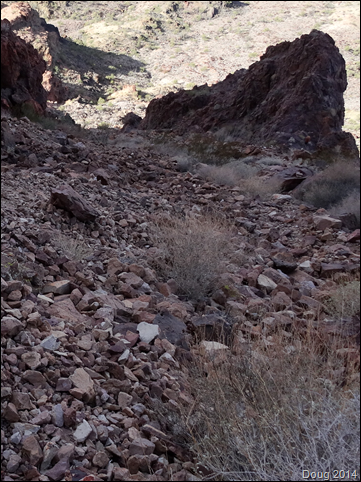 The trail is no more than a slight indention in the ground and is easily lost.  This is not a hike with nice markings to guide the way.  Luckily, there are cairns along the trail to keep us straight.  Cairns are rocks stacked up by someone to keep others on the correct path.

Unfortunately we had to stop short of our destination.  We made it to the base of the Rock itself and we were both tired (me especially) and it was getting close to 2pm.  We figured if all went well, we would be back to the bottom an hour before dark.  But if they didn’t go right we would be sleeping on the trail.  It is way too dangerous to walk in the dark.  Here is my dejected pose as we started down. 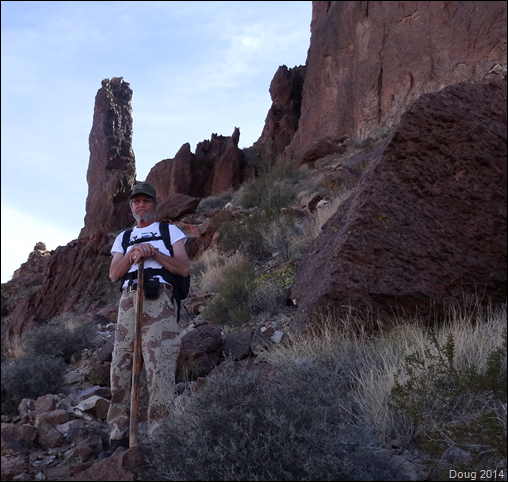 We knew that it would be another hour to walk around the Rock and climb the big slabs that would take us the remainder of the way to the top.  We came up a three or four hundred feet short.  Unfortunately, that’s 400 feet straight up.  Here is where we ended up and I think the way to the top is to follow the trail around the Rock to the right and then climb up.  However, we were guessing this to be correct, because there are no roadmaps to the top and the trail is vague. 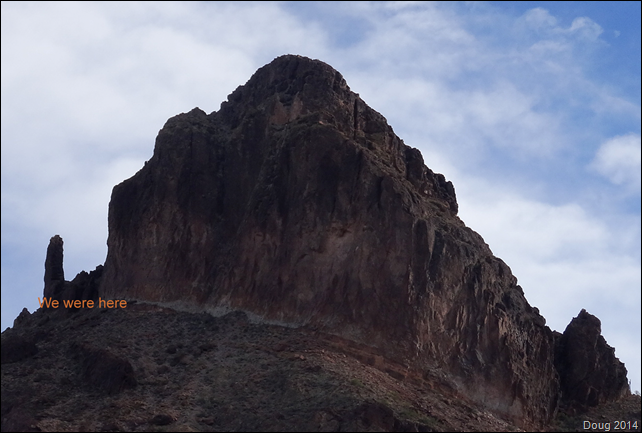 As I sat at the spot above, I took one last photo to the west and it wasn’t till I got home and looked at the photos that I saw a cairn over to the right leading around the right side of the Rock. 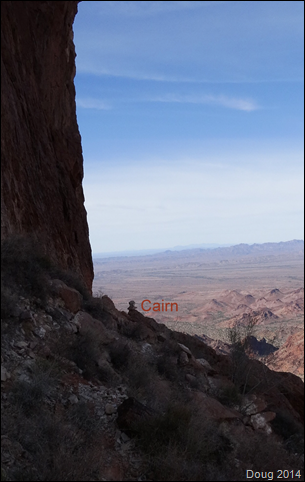 So, it was with sinking hearts we made our way back to the bottom and we were back to the vehicles by 4pm, an hour before dark.  I was very tired and my legs were getting quite rubbery, so needless to say, I slipped a lot on the way down, but my backpack gave me a nice cushion to land on.  No harm was done. 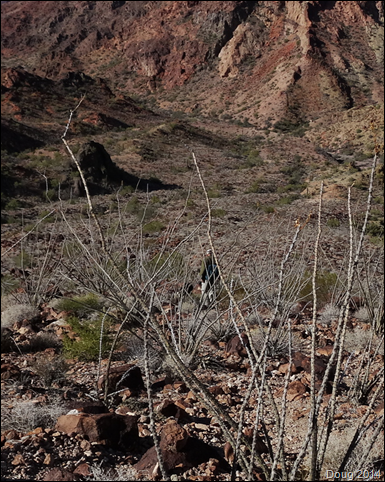 I still had to move my motorhome from the day fee area and find myself a new home before it got too dark, or I would be in the same predicament I was in last night.  So, I rushed back to Mittry Lake, and asked the fireman at the turnoff road if I could return to my camp, and he said they needed one more day to cleanup and get all the fires out before it was safe to return.

As I was heading up Senator Wash Road, I stopped at the first small long-term area  I came too and asked a gentleman if there were any free areas close by.  He told me that I could park across from the water works about a mile west on highway 24 also known as Imperial Road as I found out.

As darkness fell I pulled into an area just off the road next to the berm of the canal that goes along the highway.  There are three others here that were evacuated from Mittry Lake also.  Not pretty but it is quiet and free. 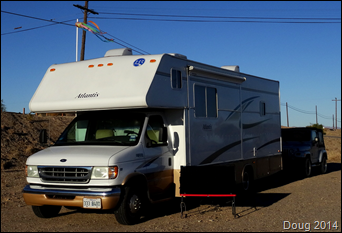 I have many photos of our hike, but must quit somewhere.  I was so tired after the fire and hike, I will be staying close to home for a few days, so may throw a few more photos of the hike in the days to come.