Last night I heard rain several times, but when I got up this morning, the sun was trying to peek out.  I made the decision I would head for Mittry Lake just northeast of Yuma.  My thinking was that the lake was so close to Yuma, I would be able to use my antenna to get local channels and pick up my favorite show “Survivor”.

Skipped breakfast and got everything ready to go and headed out about 9 am. Stopped in Ajo to get propane, dump tanks and take on water.  That took me an 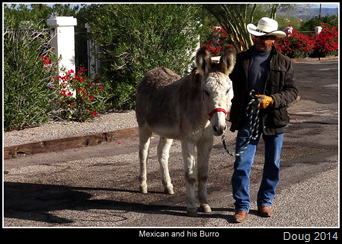 As I was waiting for the fresh water tank to fill this Mexican and his burro walked by.  I asked him if it would be okay to take their photo and they posed for me.

As I got out of town, I noticed dark clouds to my north and west.

As I drove the 40 miles on highway 85 to Gila Bend on I-8 it started to sprinkle a little bit,but it was too late now.  When I got to I-8, I was getting hungry, so stopped at the McD there to get a bite to eat.  However, there was only one person at the counter and at least 8 people in line.  Left there and walked over to the Hardees, but just as I got to the door, I thought, why pay money when I have all the fixings for lunch right in the MH.  Stopped, turned around and went back to the MH and made myself a big sandwich with ice tea.

Took I-8 due west heading through the Sonoran Desert towards Yuma, about 120 miles away.  By now it was after noon and I only drive 55 so it was going to take over two hours. The rain was coming down pretty hard along this stretch of interstate.

As I drove through Dome Valley, I could see the Castle Dome Mountains to my north.  The rains were letting up and I could see puffy clouds and blue skies to the north and west.  Things are looking up. 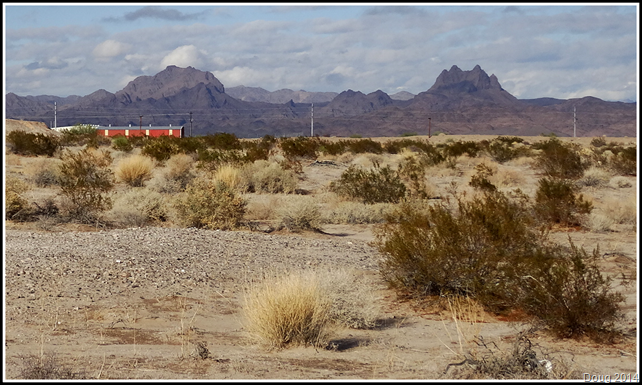 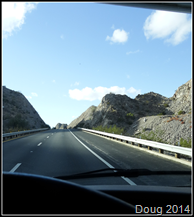 As I left  Dome Valley and climbed the northern end of the Gila Mountain range I could see the Colorado Desert spread out before me and the town of Yuma.

Seven miles before the city limits, I turned off at exit 12 heading for highway 95 that goes on up to Quartzsite.  Off to my right the Castle Dome Mountains were just to the east.  Got on highway 95 heading north. 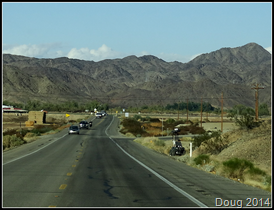 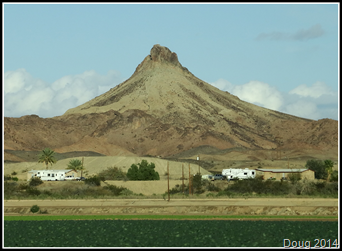 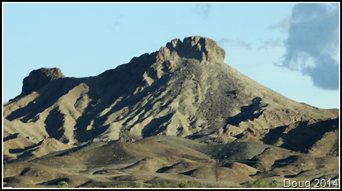 Finally hit the dirt road going into Mittry Lake.  I had to drive half way round the lake to finally find a place to stay for the night. 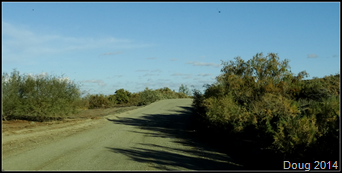 By now it was getting on 5 o’clock and I had to hurry to get the TV working, but hard as I tried, I could not figure out how to get local channels.  Either, I don’t have my cables set up properly or I am out of range.  So, I missed my TV program.

I was in such a hurry, I didn’t check for cell reception and when I did to let Dolly know I was safe, there was not AT&T cell or text available at all.  Sent her an email with my Verizon jetpack.  Hopefully, she will look at her email.  Maybe she will check the blog and know I am safe.

Too late to leave and besides I had to unhook the jeep to back into my new home by the lake, so I’m here for the night.  Going to fix some dinner and call it a night.