This morning, I took Yuma for his usual walk and he was really feisty this morning.  He ran in circles till he made me dizzy!  He would race past me at 100 mph!  I was afraid of getting killed, he came so close. 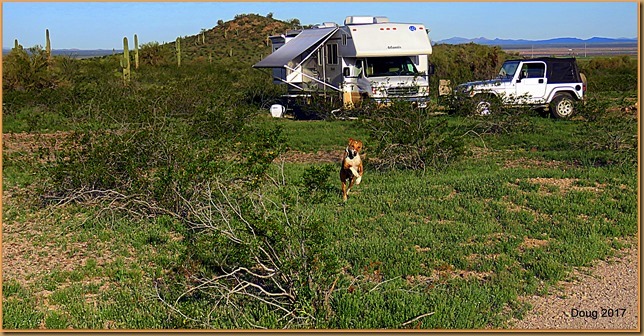 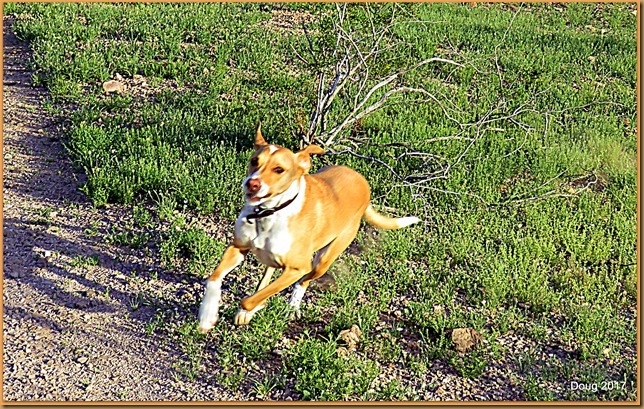 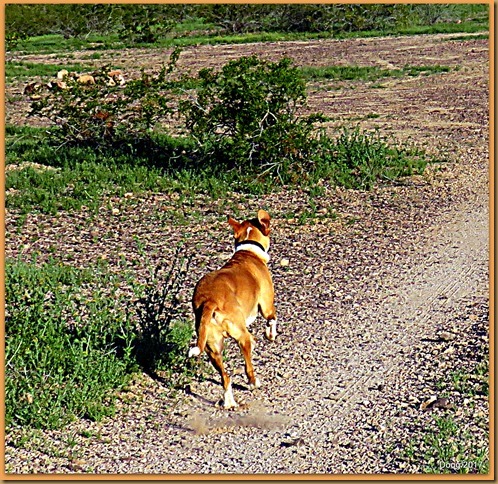 As I sat at the table drinking coffee, eating little white donuts and reading blogs, I was thinking of what I should do today.  It is going to be in the upper 80s and that is too hot to do much outside.

As I was reading Our Awesome Travels blog, I saw that George and Suzie were down in the Southeastern part of Arizona, below Tucson.  Al, Kelly and Pheebs of Travel With the Bayfield Bunch had been down that way earlier this year and I was impressed with the activities available.  Plus, being in the high plain, it will be about ten degrees cooler.  The great thing about boondocking in an RV is that you can get up and go whenever the mood strikes you.

I made my decision and after breakfast, I packed up and we were out of there by 11 o’clock, heading towards Tucson.  I knew just the place to stay for the night.  Then get a fresh start in the morning to look for a great boondocking spot down near Sonoita, Arizona in the Las Cienegas National Conservation Area. 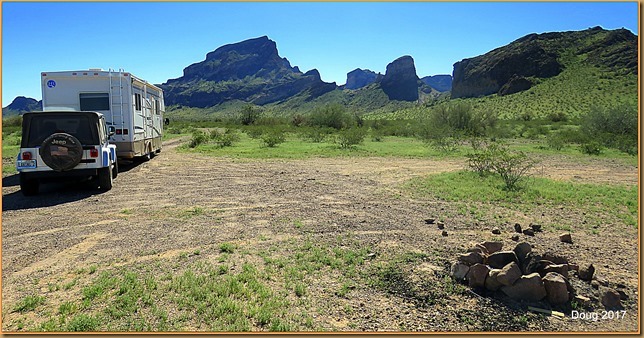 Made our way out of the Saddle Mountain BLM and quickly caught I-10 at Tonopah.  Before reaching Phoenix, I stopped at the Love’s Truck Stop and dumped tanks and took on water.

I then took the hwy 85 Phoenix to Tucson bypass down to Gila Bend.  At Gila Bend I stopped for gas and ran into three dinosaurs.  I also got a great shot of a fighter jet at the Gila Bend airport.

The shrubbery along the highway was pretty.

From there it was a straight drive through the Sonoran Desert to Casa Grande, where I-8 joined I-10 heading Southeast to Tucson.

About 50 miles from Tucson, I could see Picacho Peak in the distance.  Beautiful extinct volcano.

I got passed by an elephant and a rhinoceros and a lion. 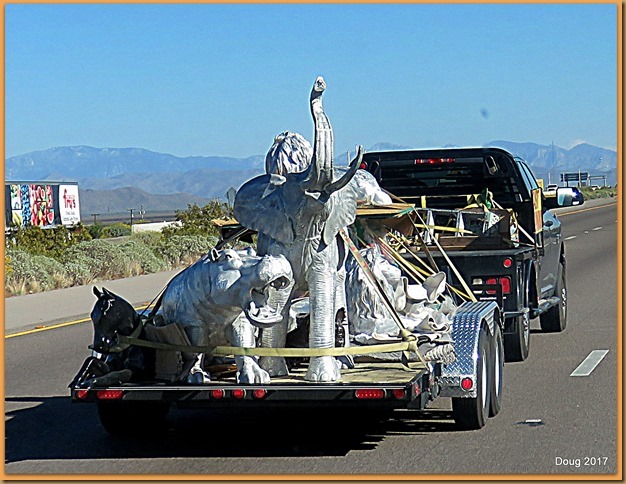 Everything was going smoothly until…….

My Garmin told me to get off I-10 at exit 250 in the northern part of Tucson.   Thought it odd, but trusted her, thinking she knew a nice quick way to get to the southwest part of town from there.

I pulled over and corrected my destination and instead of 3 miles to my destination, it was 23 miles.  I went all the way through the west section of the city and caught I-10 again.  After an hour delay, I was finally on track and heading for the Casino Del Sol.  It’s not like it’s the first time I have been there.  In fact this will be my third or fourth visit.  The only excuse I have is STUPIDITY!  Can’t blame Miss Garmin on this one.

Pulled into the casino just a little after 5 p.m.  I guess I can be thankful it is Saturday and I didn’t get caught in the 5 o’clock Tucson traffic.

The RV section is packed.

Found me a spot in the middle for the night.