Getting to know the terrain

Last night’s moon was a bust for seeing it rise over the Whetstone Mountains.  It was completely dark when it came up and my camera would not pick up the mountains.  So, all you get is a moon shot. 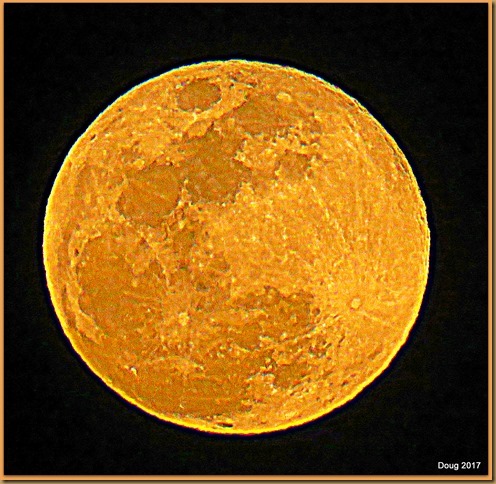 However, as the sun was setting, I did get a great shot of the sun rays hitting the Whetstone Mountains to my East.

My first thought this morning was to just sit around and enjoy the beautiful scenery here at the RV.   Didn’t eat dinner last night, so was starving this morning.  Had bacon and eggs and the whole thing that goes with it.  Filled myself up.

Here’s the moon setting over the northern section of the Santa Rita Mountains to my West. 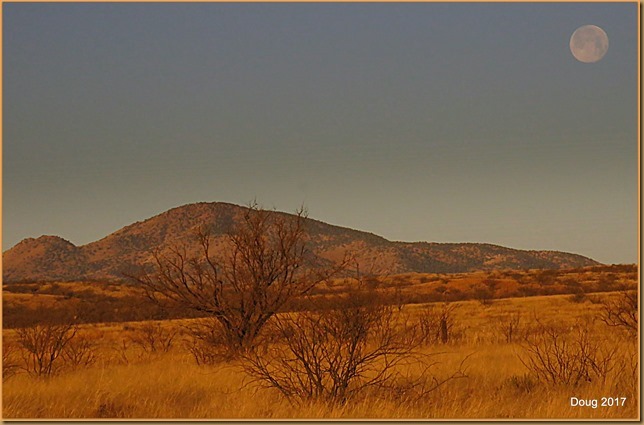 Just can’t stop taking photos of the beautiful Whetstone Mountains to my East.

About noon, I couldn’t stand lying in the lounger anymore.  It is such a beautiful day, I have to do something.  There is a long stand of Cottonwood trees to my South near the Empire Ranch about a mile away.  Nothing but prairie grass and Ironwood trees between me and them.  Time for a walk.

Along the way, I saw several more burrow colonies.  Looked up on the Internet this morning and found that Black tailed prairie dogs have been re-introduced to this area.  Haven’t seen any, but that’s what they say. 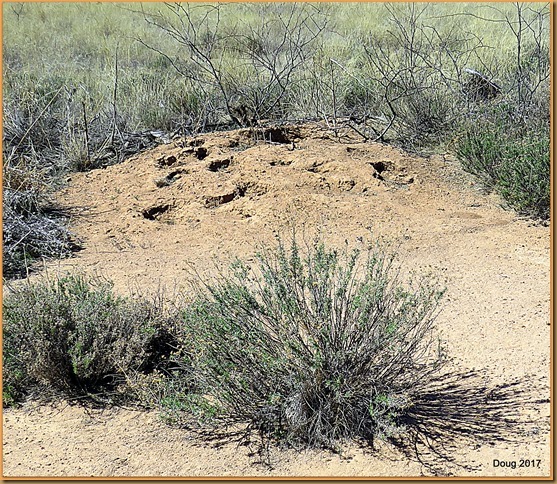 As we were walking, we followed animal trails through the grass and into the Ironwood trees.  There is a small pond back in there.  Probably used for the ranch cattle at one time.  Yuma was on the other side of the pond and I called him to come along.

He thought he could just run across that pond and before he knew it, he was swimming for his life back to shore.  It was deeper than he thought.  I was so shocked and yelling for him to go back, I didn’t get a picture.  What a loss!  It would have been priceless to get a picture of the shocked look on his face. 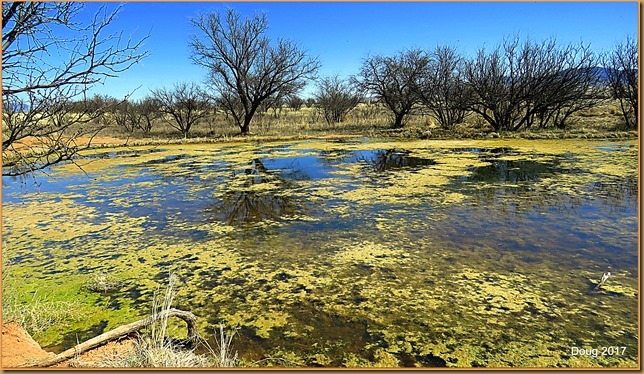 Yuma guiding me through the Ironwood trees. 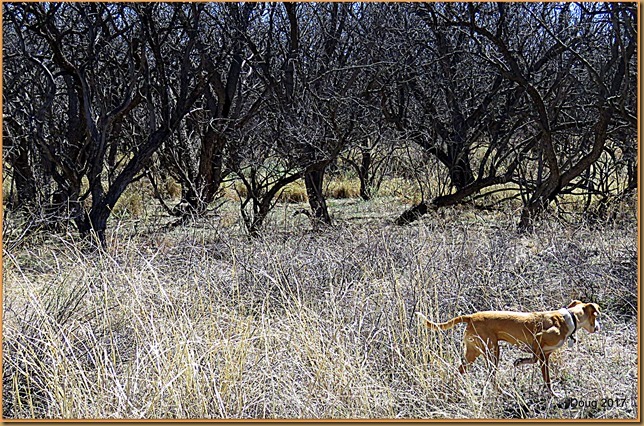 He cautiously approaches a blind.  He’s not sure what it is.  No one home, thank goodness. 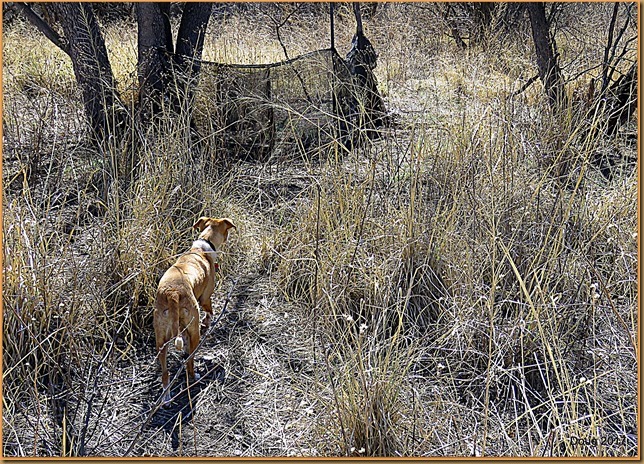 We dropped down into a creek area the Cottonwood trees followed.  There was a well worn path going along the creek bed, so we followed it through the tree canopy. 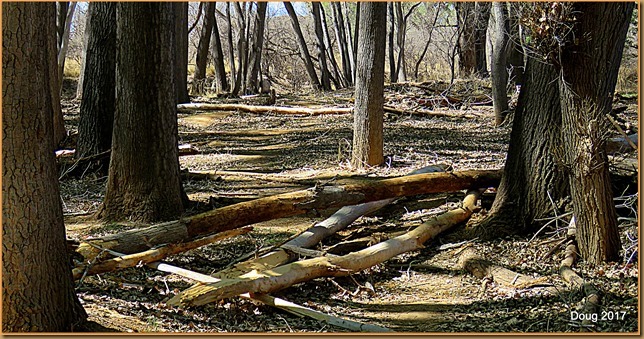 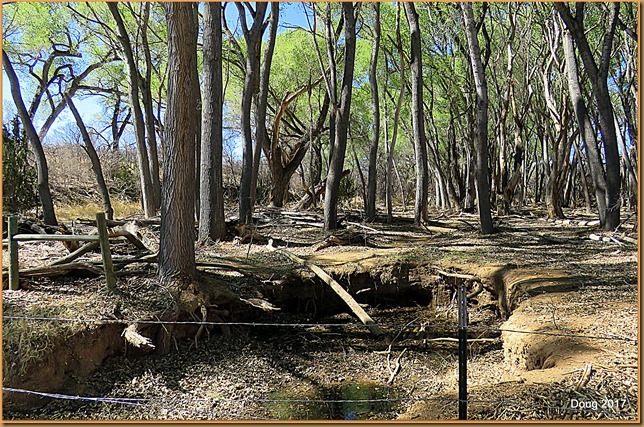 Another blind, but a tree blind this time. 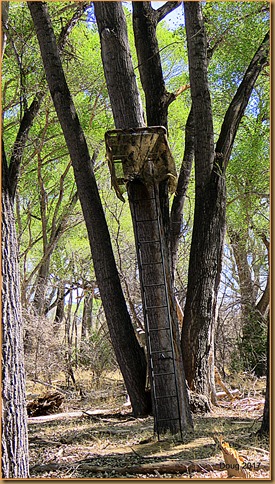 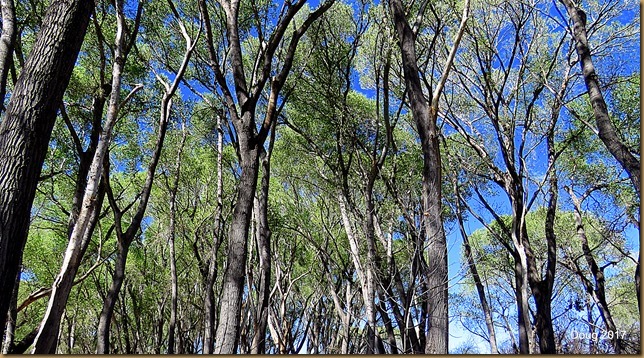 The creek was very small, but it was running and clear.  There were frogs in it. 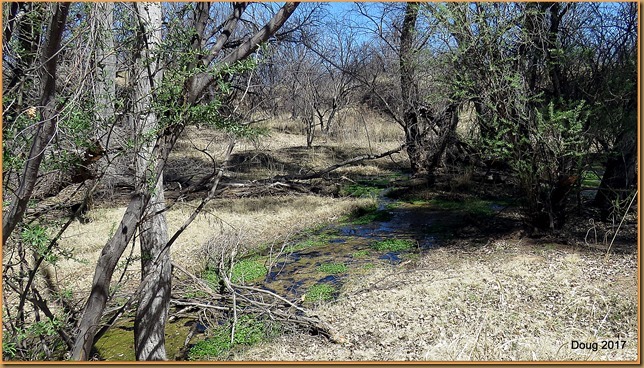 As we exited into a parking lot, I found we had been walking in Empire Gulch, a bird sanctuary, located just behind the Empire Ranch.  The creek is named Cienegas Creek. 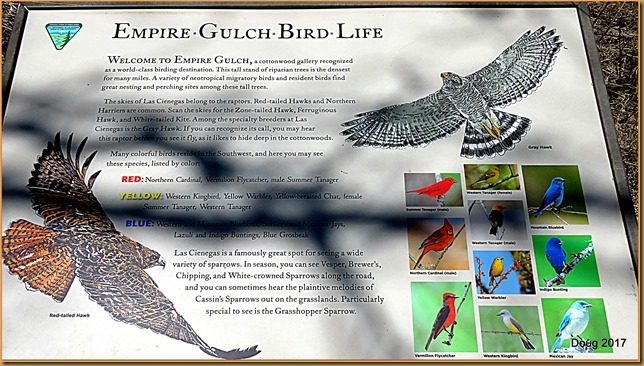 At the edge of the parking lot is the huge old Cottonwood tree.  The stories it could tell! Before heading back to camp, I just couldn’t resist walking around the outside of the historic Empire Ranch. 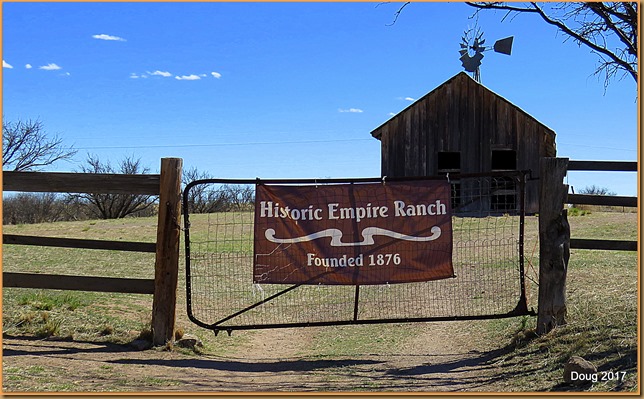 As we walked up the dusty dirt road toward camp I took one more photo of that old Cottonwood.  You can see the tops of the Empire Ranch to the right of it.

Be sure to click on pictures to enlarge.  I found that if you just turn the zoom to 125% on the Microsoft Edge browser, it made everything larger; the words and the pictures.  Click on the three dots at the top right of the browser and you will see Zoom.

Didn’t mention yesterday, but the Empire Mountains are directly North of my RV.  There are mountains everywhere you look. 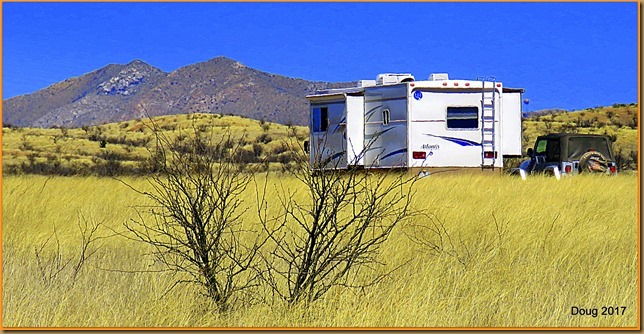 Ended up walking five miles.  That’s a lot for planning to just sit at home and lay in the lounge chair all day.

At 3 o’clock, Yuma and I drove up Oak Canyon Road to see what was there.  Sure enough there is a huge Oak tree further down the road from where we are.

I remember crawling up the limbs of old southern oak trees when I was a kid growing up in South Georgia.  They would be in the middle of a farmer’s field.  Just a huge tree with a jungle beneath it and nothing but farm field around it.  Glad they didn’t just cut them down to make more farmland. 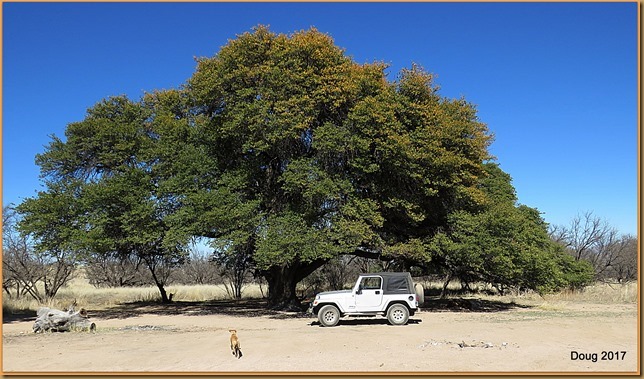 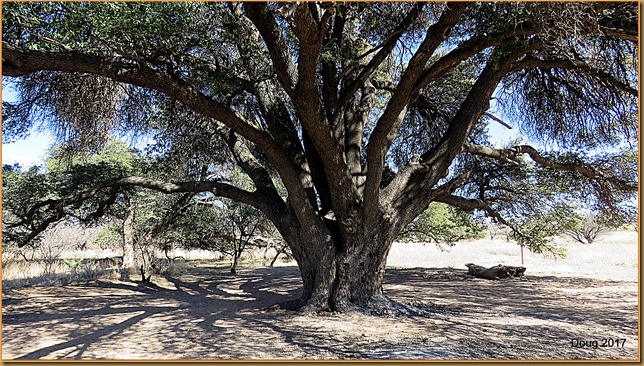