This morning looks to be a duplicate of yesterday.   A couple of nice photos of our early morning walk.  That’s the sun hitting the Santa Rita Mountains to my West and the MH. 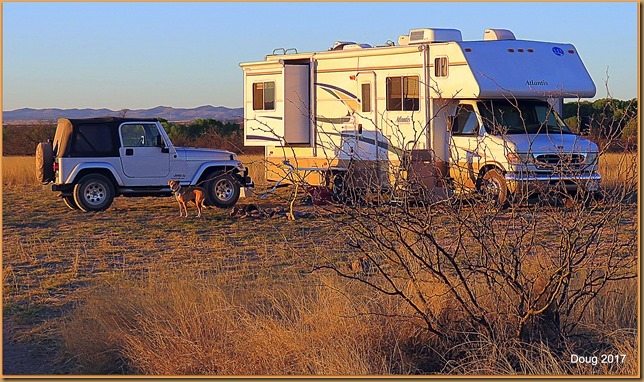 Took my time with breakfast and round 10:30, we decided to hike to some Oak trees about a half mile to the Northwest of us. 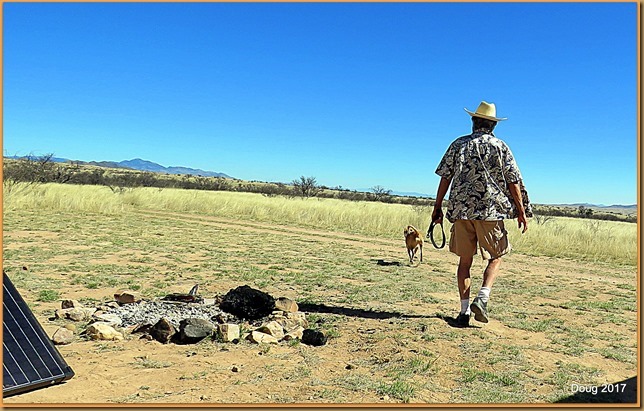 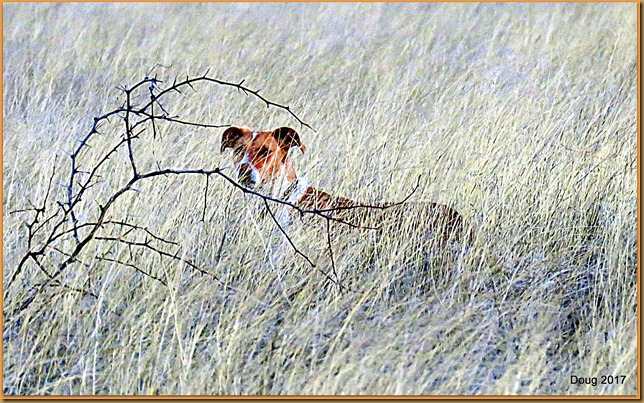 We stumbled on this lone barrel cactus getting ready to bloom.  The only one I’ve seen out here so far. 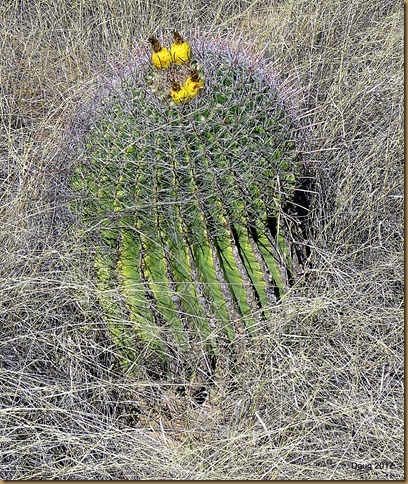 There are the line of oak trees we are heading for. 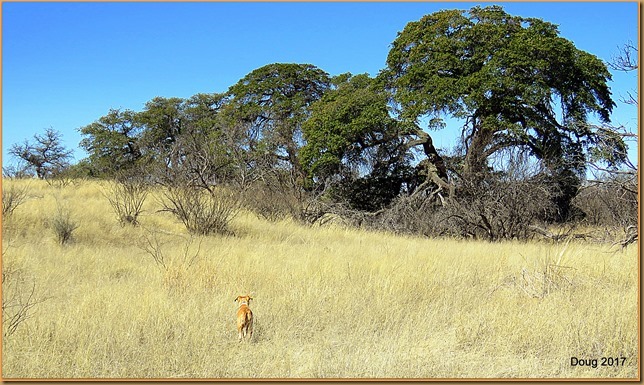 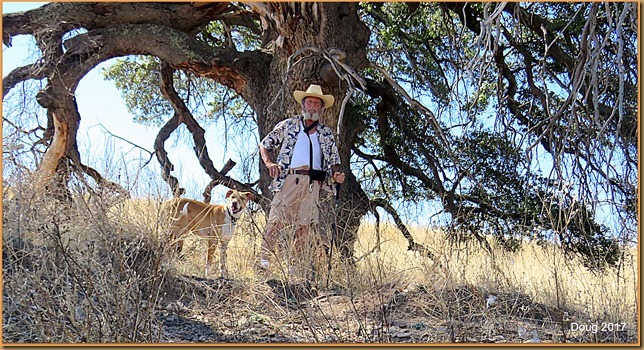 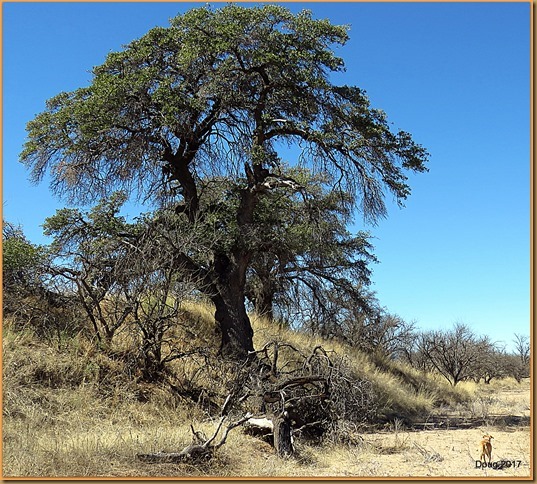 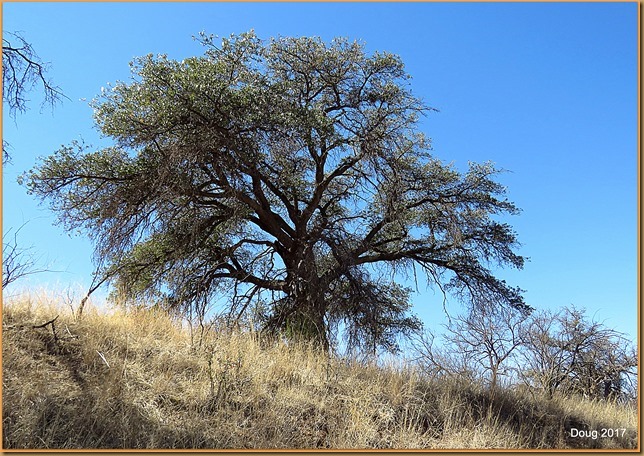 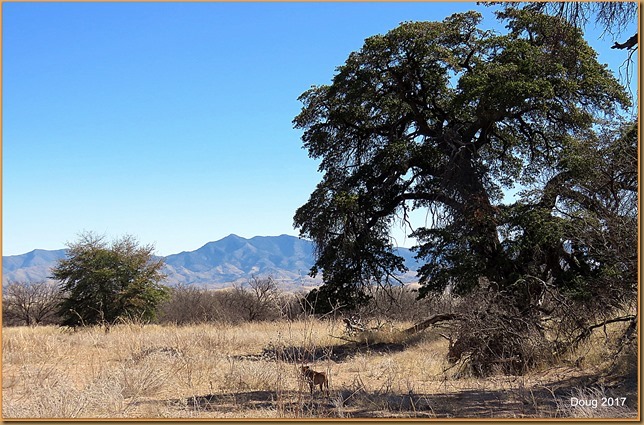 We normally find animal paths to follow through the grasslands.  Much easier than forging on our own. 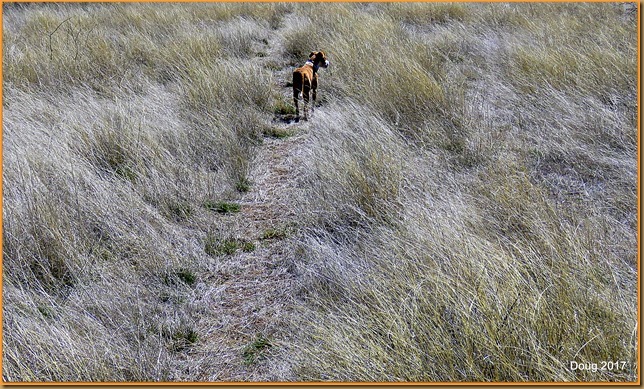 Only walked about a mile and a half on this hike and took us an hour, so we were back at camp before noon.

We rested for about an hour and around 1 p.m., my son Ben called.  He wanted to let me know that they were finally moved into their new home.  He didn’t realize how hard it is to move all “your stuff” from one place to the another.  Luckily, both places are in the same small town of Lebanon, Indiana.  Very happy for them to finally get settled in their own home.

Yuma and I decided this afternoon, we would go back to Empire Gulch and walk the length of it, since we came into the middle of it yesterday.  Instead of walking to it, we jumped in the Jeep and drove the mile down to the parking lot where it begins.  Here we go again!  Into the Cottonwoods. 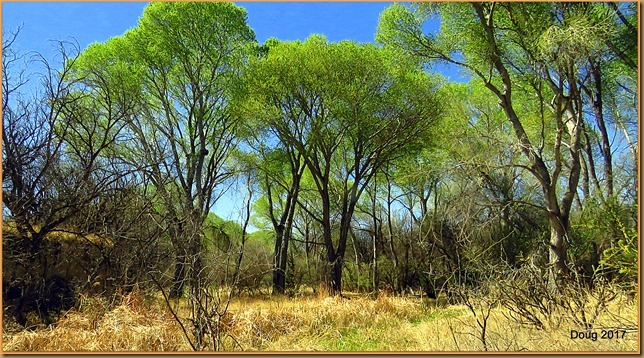 Had to cross Cienegas Creek several times.  No bridges, but someone was kind enough to either put boards or tree limbs down to help.  Yuma didn’t need help.  He just ran or walked right through the creek. 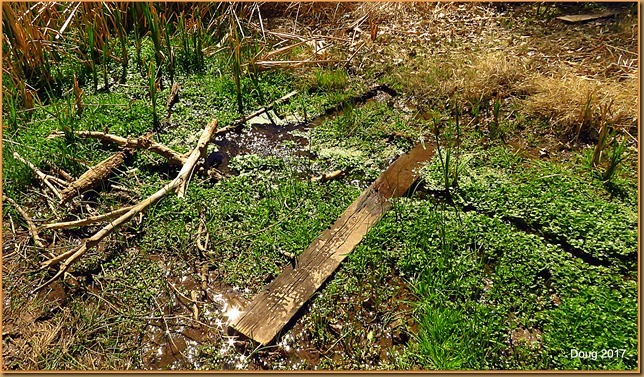 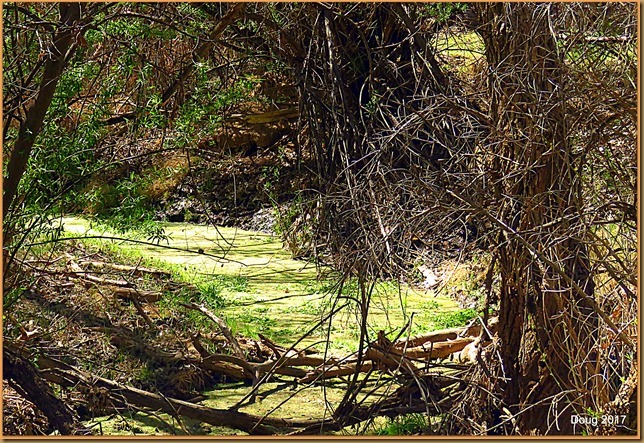 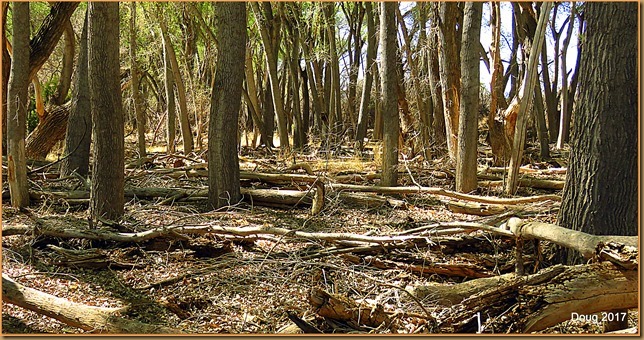 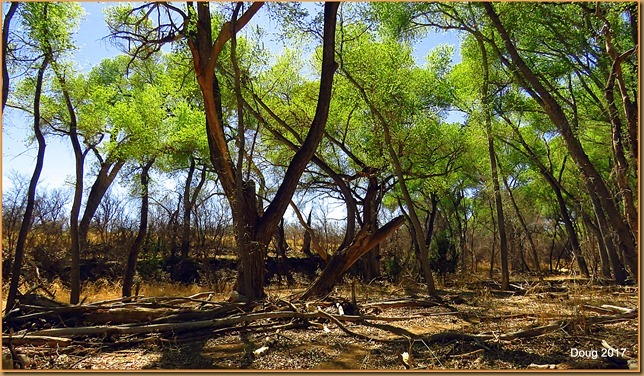 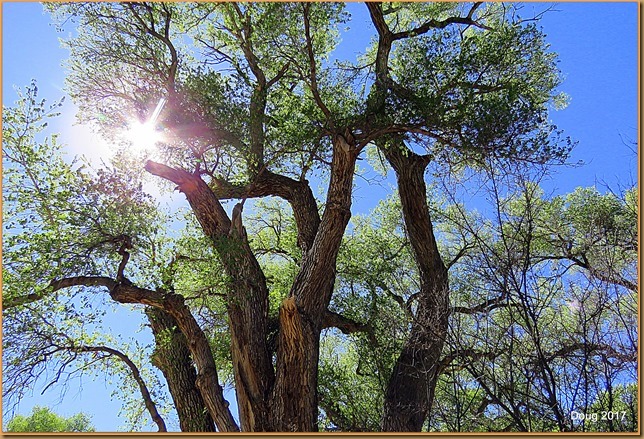 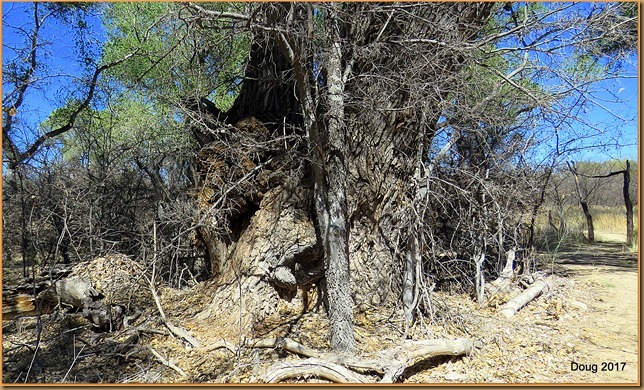 Saw a sign telling me not to rest under these trees, especially on windy days.  I wonder why? 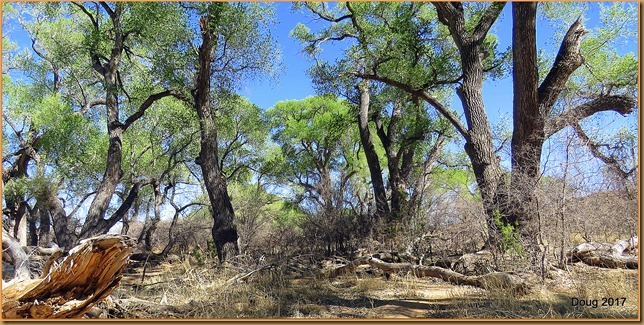 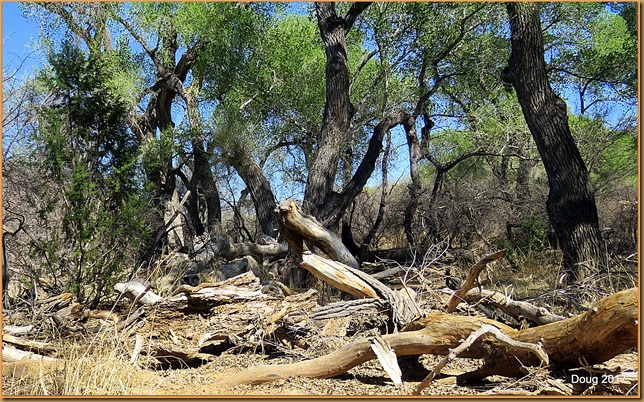 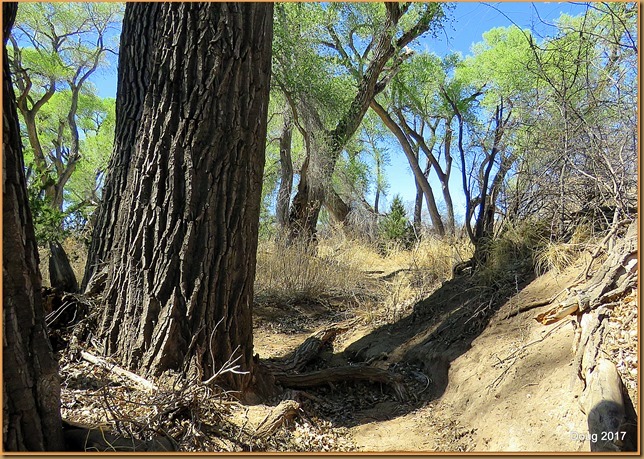 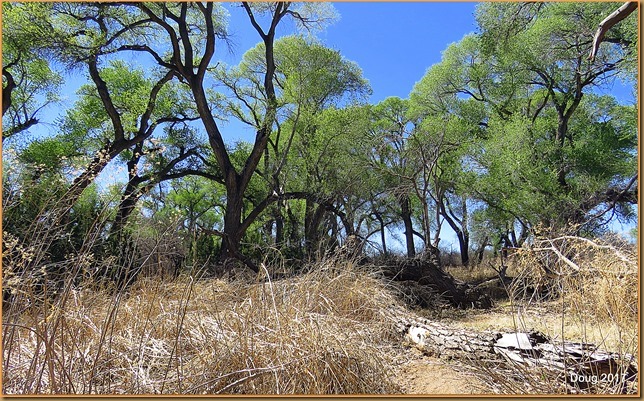 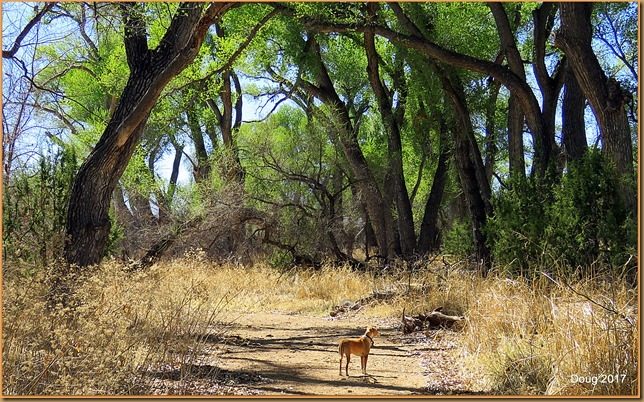 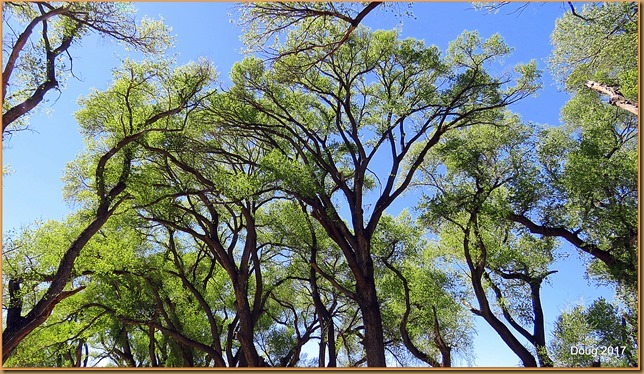 We had walked West all the way till there were no more trees.  The creek had disappeared underground and there was nothing but a gulch now.  We turned South when we hit a dirt road, hoping we would be able to find our way to the Empire Ranch.  Then we hit another dirt road heading East towards the Empire Ranch.

There are the Mustang Mountains off in the distance to the Southeast.

Came over a rise and I could see the windmill in the distance and I knew we were heading home.  Getting thirsty by this time. 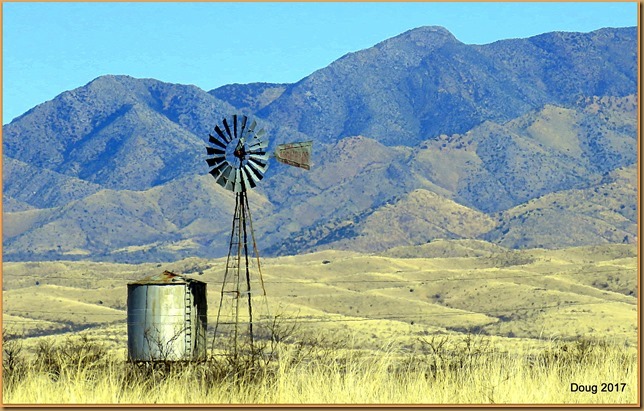 Took the Heritage Discovery Trail to get back down to the gulch and headed back to the Jeep. 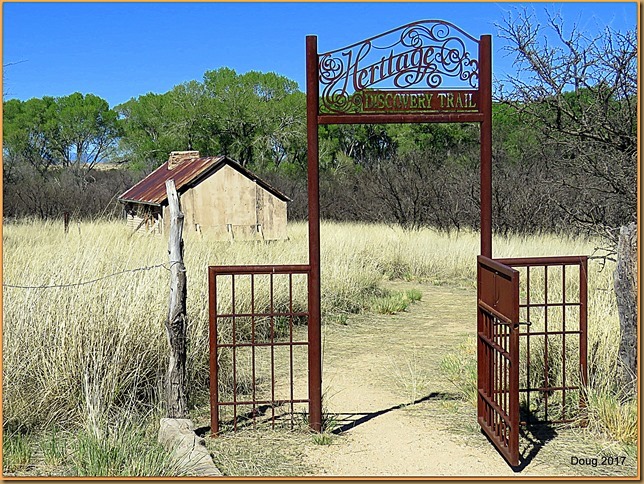 Must have taken a hundred photos to get this one of a butterfly on a flower.  Only needed one shot for the flower. 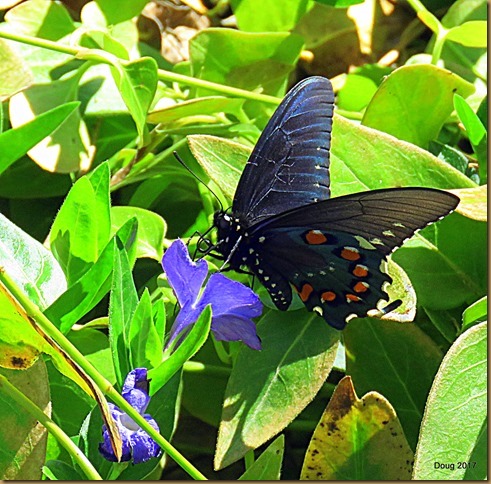 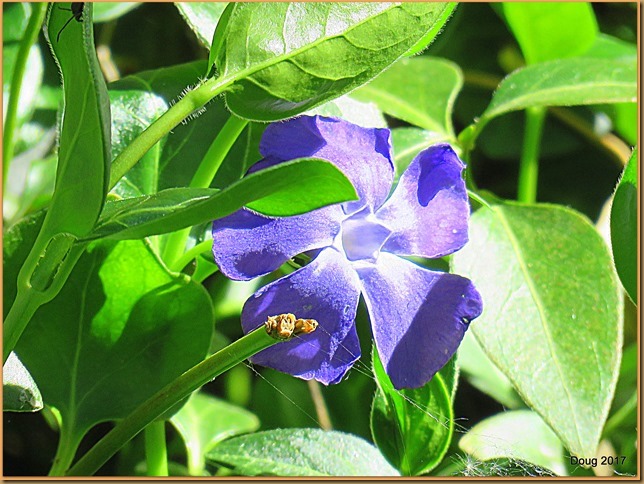 I walked five miles again today and Yuma must have gone a hundred miles.  He just loved this gulch.  He had to jump in Cienegas Creek a number of times.  I told him when we got home, he was going to have a bath.  And, he did!

Sun is again setting in the grasslands and the last sun rays are falling on the Whetstone Mountains as Yuma races for home. 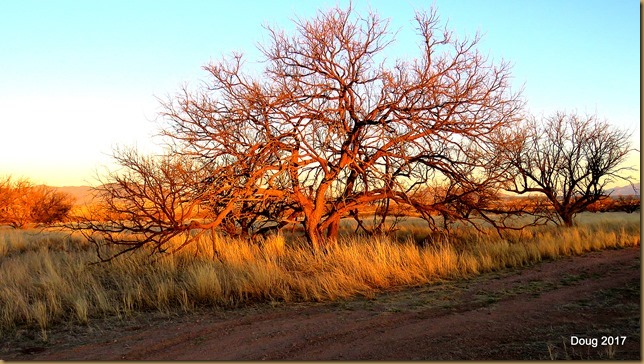