Yesterday, I was in search of the elusive Springtime CG and finally got there and turned down the lane to go the half mile to see the campground.  I must say, the forestry service did an excellent job of making this place look nice.

There are small three-sided protective log structures with concrete tables outside the openings.  There must have been about 10 of them around the area nestled in the Pine trees.  The sound of the wind blowing through them was quite soothing.  This is where I need to be on such a hot day.There was not a soul there and I wasn’t surprised because of the tough road to get there.  No way, I could get the RV up here though. 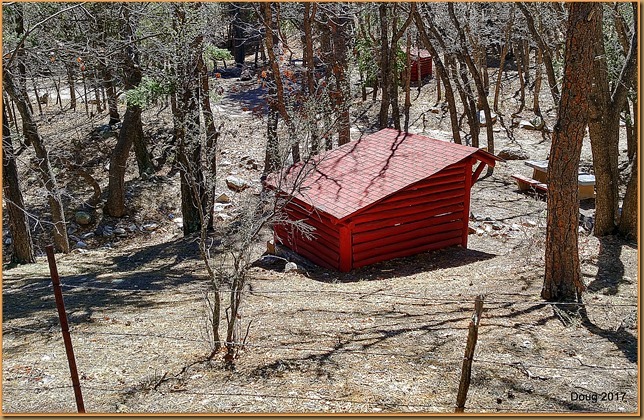 There is an Apache Kid Wilderness Trail leading up to San Mateo Peak, but it is 4 1/2 miles.  I knew I couldn’t hike that far uphill, but we did hike about a mile of it.   I was hoping to break out of the pines and get a shot of the peak, but never happened. 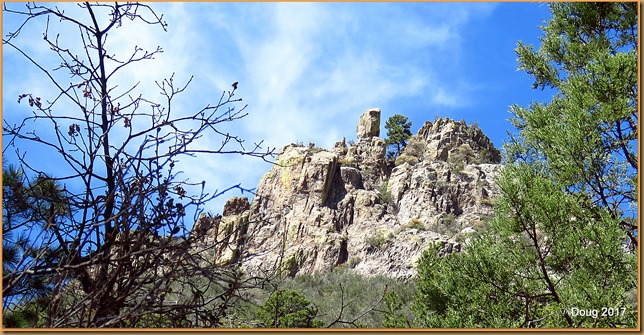 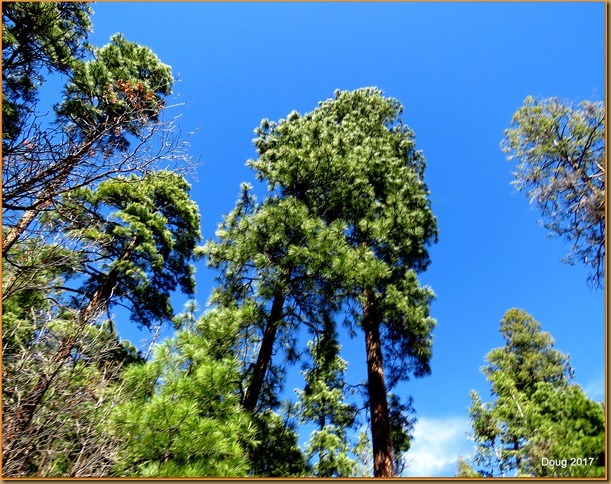 Yuma had the best time running up and down that trail.  I was afraid he was going to kill himself. 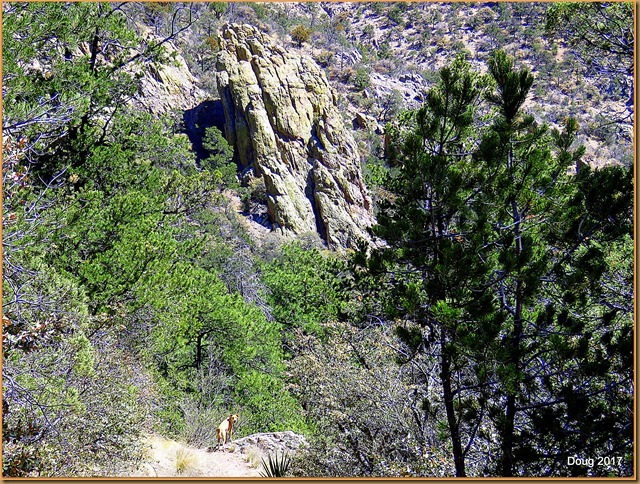 We did pass the spring the camp is named for though.  I couldn’t believe as we were walking up the trail, water streamed across.  And just a few feet above the trail, I could hear a bubbling sound.  I looked to see where the sound was coming from, and right next to a large Pine tree, there was a small rock formation and spring water was bubbling to the surface from a very small hole in the rock formation. 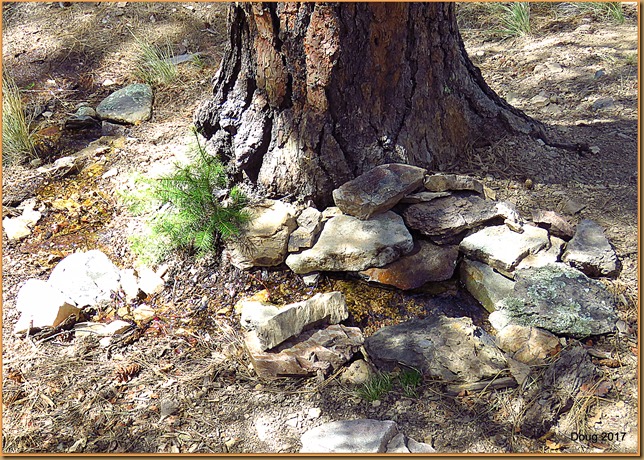 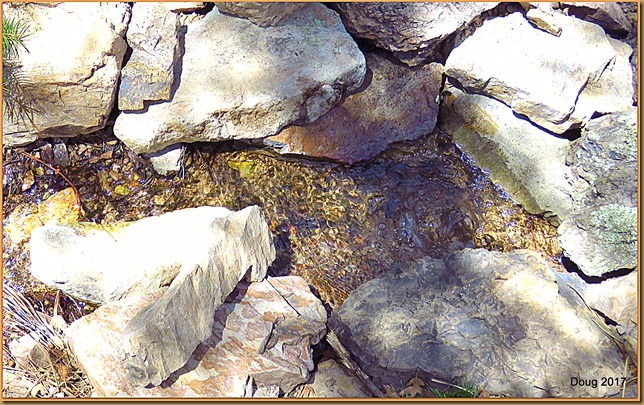 Well, that’s it for Springtime Campground.  Will never go there again, but it was fun to do once.

Just as we got back on the road to head for home, I had to swerve to miss this guy.  He laid there motionless, hoping I wouldn’t see him, just like the king snake I saw earlier.  This guy is a Racer.  Very slender and about three feet in length.  When I touched its tail, it was gone in an instant. 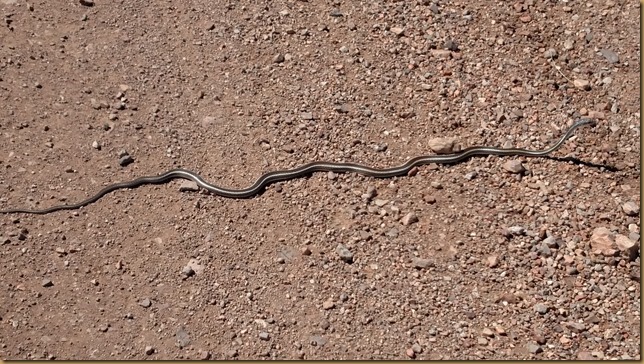 The 14 miles of forest road leaving the campground to the desert was not near as bad as the way we came in.  It followed Chaunte Canyon all the way down to hwy 1.  However, there were some very rough washes making it impossible for me to bring my RV to the campground.

It was a long, but beautiful 40 mile circle

This morning, Yuma and I didn’t rush our morning.  First, we took our walk and again we saw the cows the cattleman was looking for yesterday and couldn’t find.  Hopefully, he stops by today and I can tell him.

I sat around eating little white donuts and drinking coffee till around 10:30 and then had my breakfast.   I couldn’t believe it was getting so late.  We need to get going if we are going to get anything done today.   The wind outside is ferocious today.  There is a wind advisory for 15-25 mph with gusts to 50.

We decided to take a Jeep journey to Chloride, New Mexico.  About 60 miles away, it is an old silver mining town.  Now it is a very small tourist attraction in the middle of nowhere!

There were clouds and spitting a little rain as we pulled out around noon.  Dark clouds over the mountains looked ominous.  But we were determined to go. 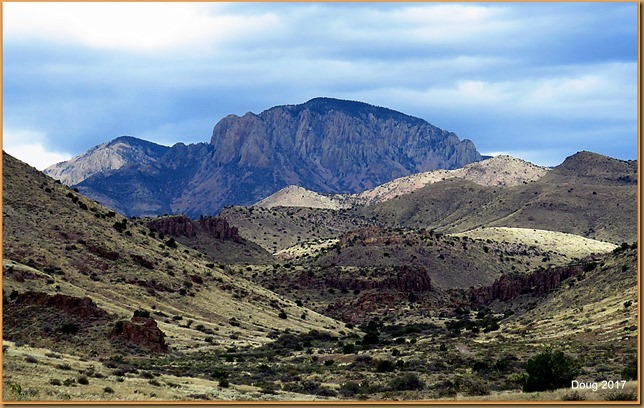 We headed West on our forest road 139 and followed it for about five miles where it hit hwy 142  blacktop at the little tiny village of Monticello.  Has a church and a fire station and some homes. 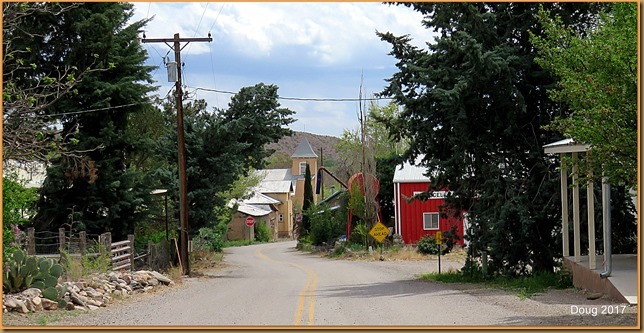 Followed hwy 142 for twelve miles until it dead ended into hwy 52.  Turned right towards Winston, 27 miles down the road.  Soon, we hit the blip in the highway named Cuchillo.  Nice historic home for sale. 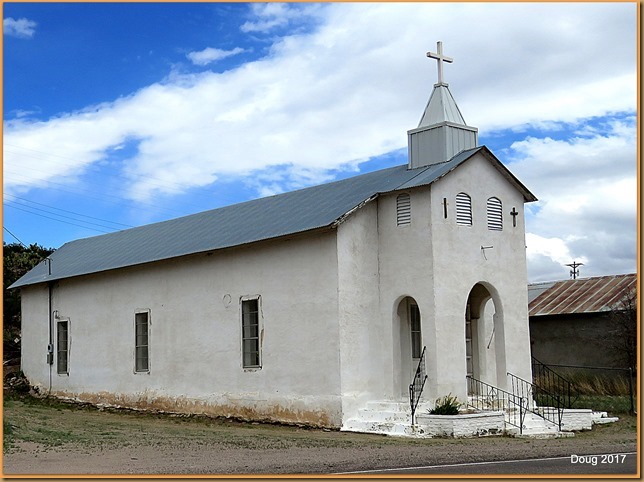 The Old Cuchillo Bar and store.

We continued along the desert floor heading for the mountains ahead. 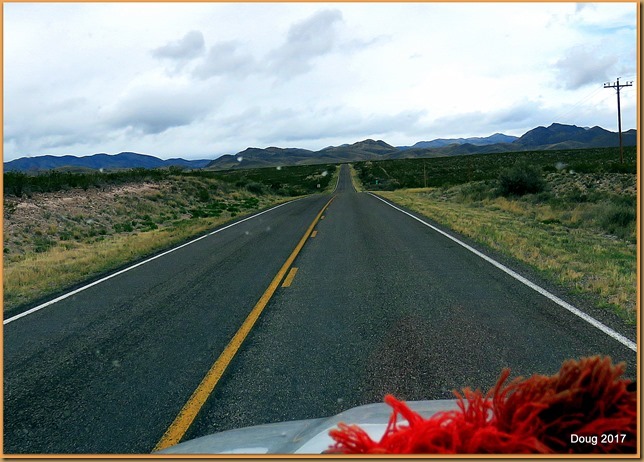 Soon, we were turning left and right, up and down as we made our way through canyons until we hit the small town of Winston.  Still black clouds and spitting rain.  Very windy the whole way, and of course we’re heading West and the wind is coming out of the Southwest. 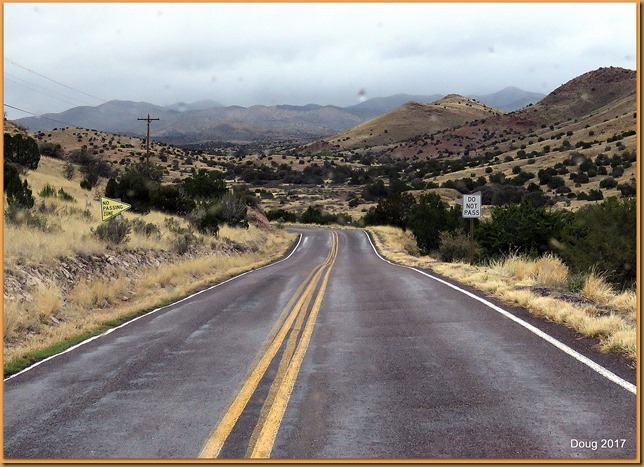 Can’t say much for the way this place presents itself to those passing by, except for the General Store. 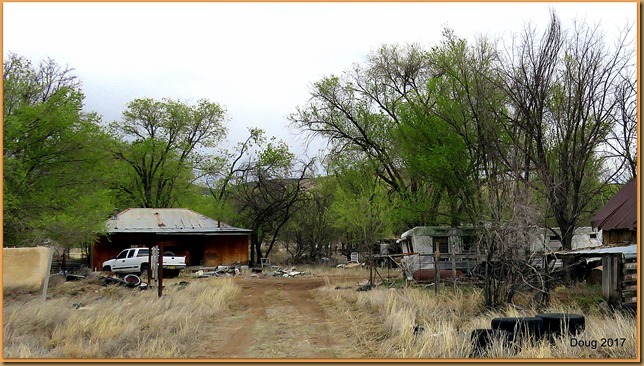 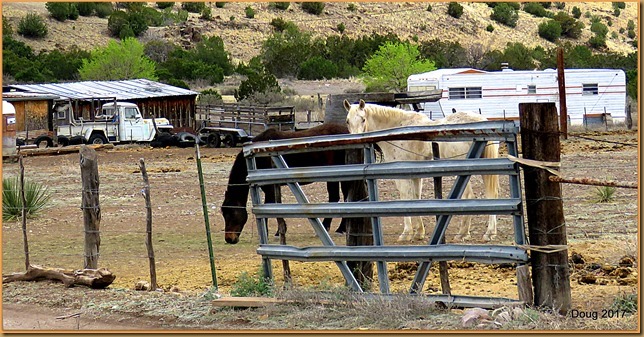 On the western outskirts of Winston, there was a sign pointing towards Chloride about two miles down the road.  Just as we pulled into the town of Chloride, the clouds turned puffy white with an abundance of blue sky.  I had worried the whole 60 miles, that I would get here and it would be cloudy and spitting rain.  You cannot ask for more beautiful weather. 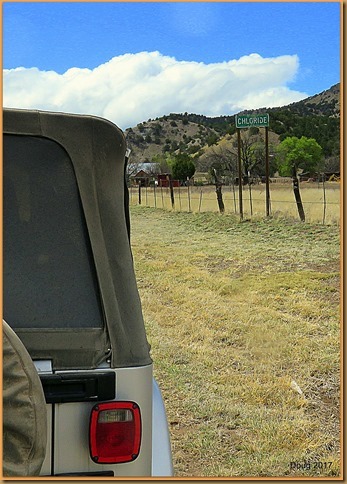 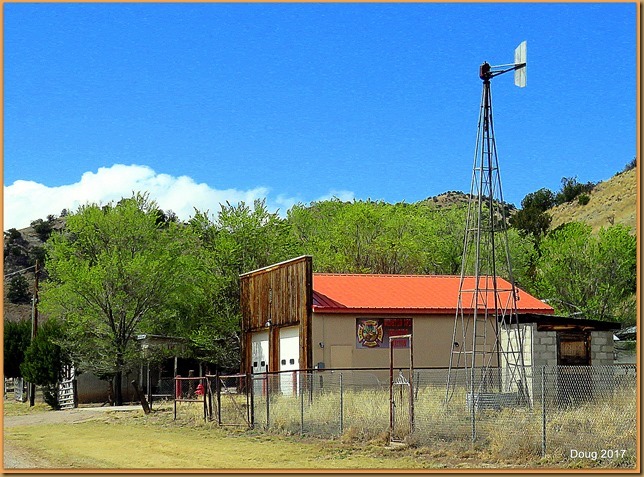 I’ve hit the photo limit for today’s post and unfortunately, I will have to leave you hanging again.  Tomorrow, I have lots of photos of Chloride, New Mexico for you to see, I promise.