Petroglyphs on Saddle Mountain and goodbye to Albert

Woke up to a clear blue sky this morning.  Was quite cool last night, but that is changing.  Today, highs in the mid-seventies and a low of fifty tonight.

Didn’t have any plans for today, so after all my morning duties, Yuma and I decided to take the dirt roads along the mountains to the the Eastern end and do some hiking.  About 10:30, it was already quite warm and we were ready to go.

Here is a photo I took late on the first day here showing the East end of the mountain range.  We ended up on a dead end road in the valley just to the right of that round dome you see in the center left.

Here’s what it looks like around 11 a.m. when we arrived.

This Jeep trail dead ends at the entrance to the canyon ahead. 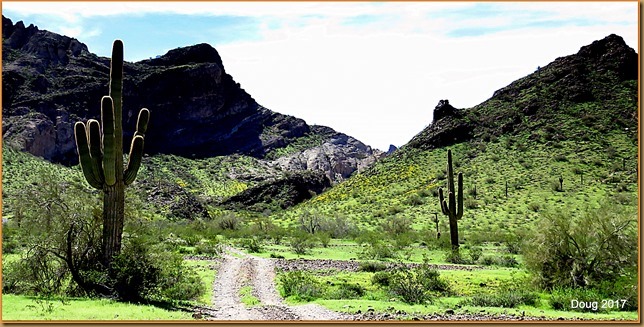 Looking to the right back along Saddle Mountain to the West. 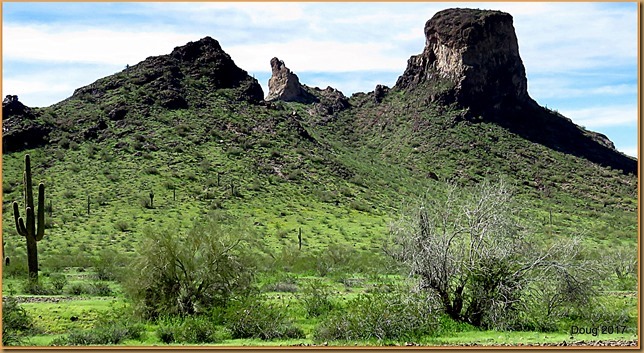 The rock formation on the right is the one we ended up circling.  At this time I didn’t know that was what we were going to do.  I didn’t know where the canyon would end.

Looking back at the Jeep as we head out on our hike. 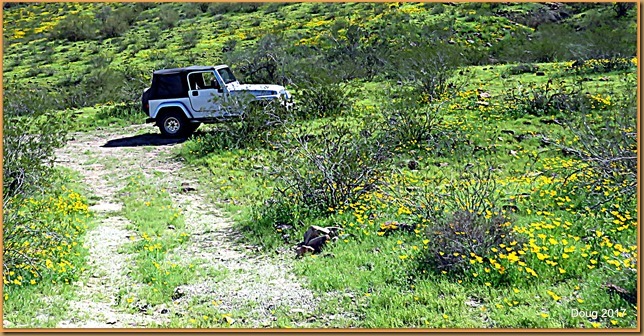 Yuma likes to walk through and snuffle the flowers. 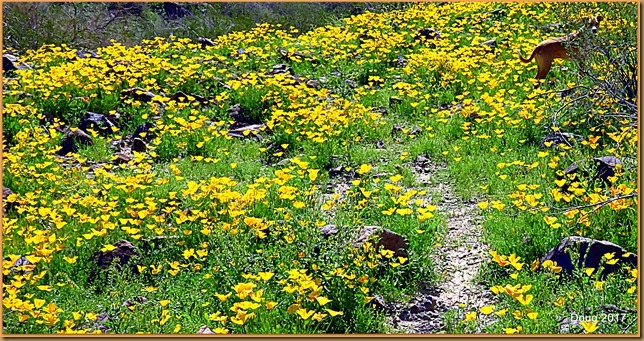 As we’re walking along the canyon floor, I looked up at the rock formation and could see a cave like indention right in the center of this photo.  Thinking it could hold treasures, Yuma and I headed up to it. 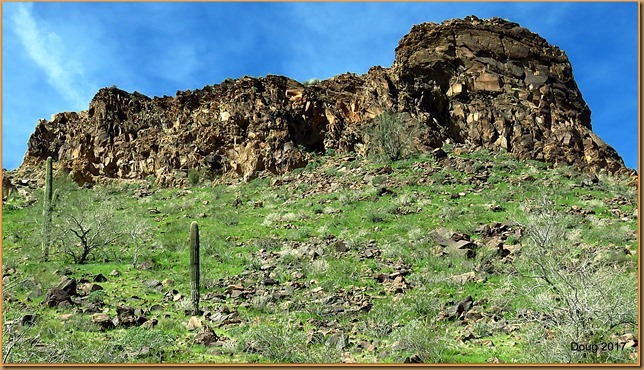 As we neared the top, I was basically walking on all fours holding onto rocks.  I look down and what do I see?  An old cell phone staring back at me.  I had an AT&T Samsung flip top just like this one before going to a smart phone many years ago.  Wonder how long this one has been here.  Years, I bet! 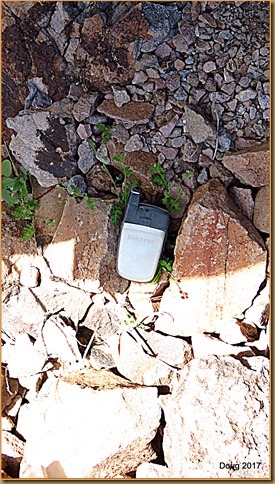 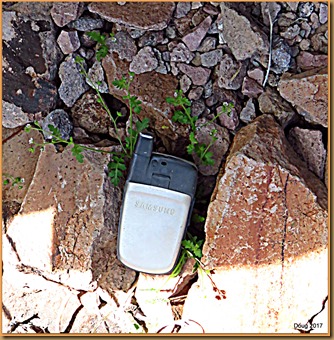 One of these days, I will get a battery for it and see if I can contact the owner.  I lost my smart phone two winters ago in the Mojave National Park.  Still waiting for someone to call me and tell me they found it.

Below, I am looking across the canyon to the Northeast from the cave. 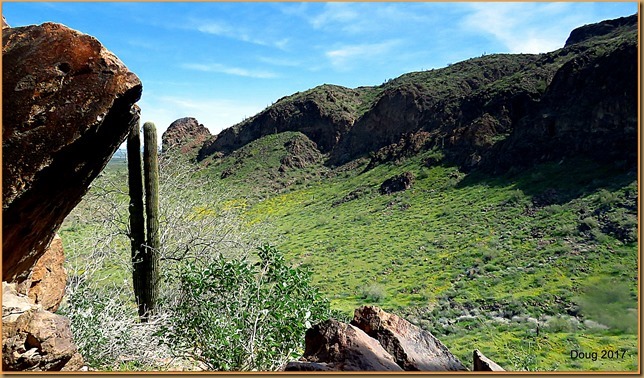 Zoom shot of Yuma wandering around on the side of the canyon and my Jeep below. 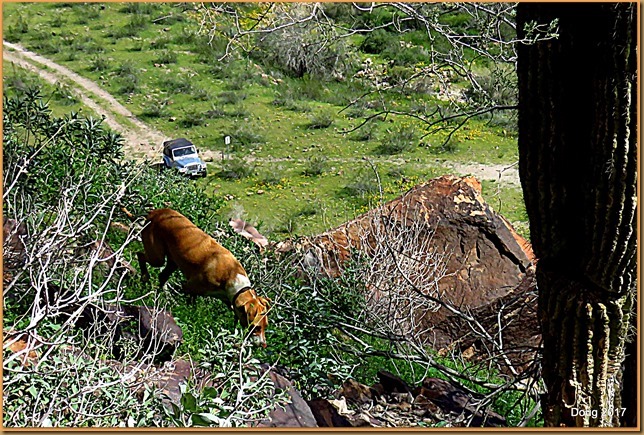 The cave went back about eight feet.  Looks like maybe someone has built a fire in the small indention in the rock on the left.  No residue in there though.  No old cooked bones or arrowheads either.  Darn! 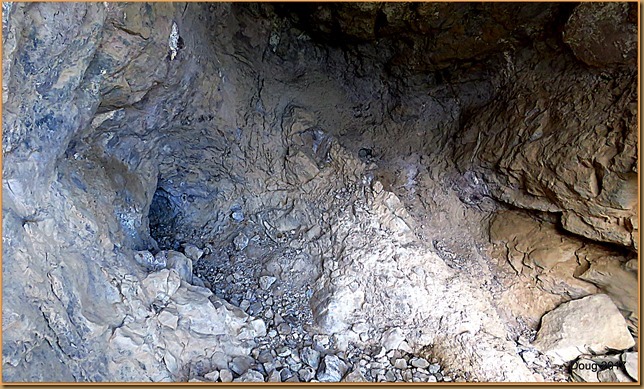 I drop back down after leaving the cave.  Didn’t find anything of interest in there.  Here we come around the rock formation on a little saddle between two canyons.  I can see to the West now along Saddle Mountain. 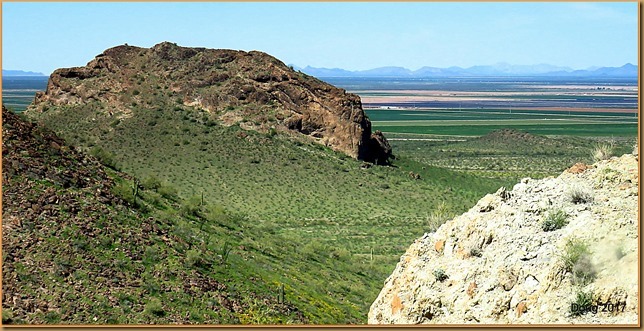 As we stood on the saddle between the two canyons I could look up at the rock formation and looking the other way to the South, some beautiful mountain peaks.  Yuma and I are walking along the saddle in the next two photos. 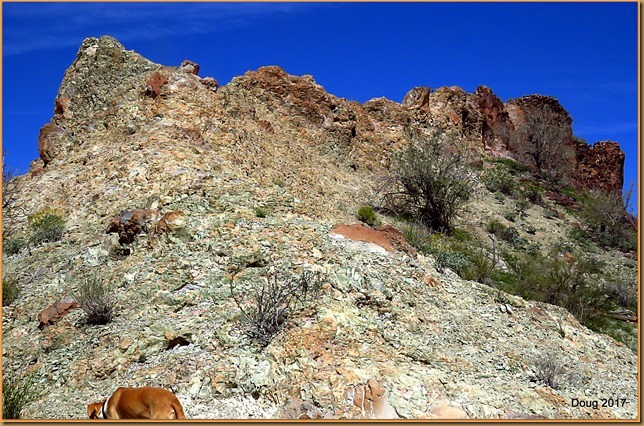 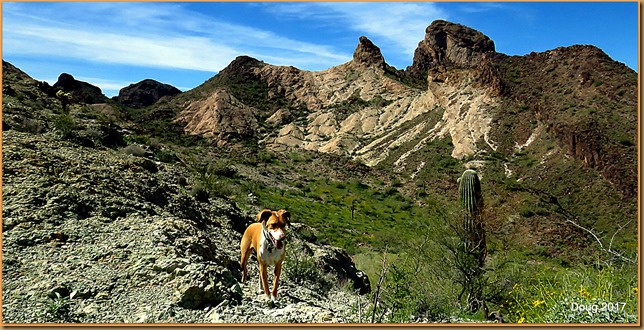 As we came around the mountain, I could see the Harquahala Mountains to the Northwest.  Remember, I jeeped up the tallest point at the upper right last week.  Our RV is down in the white criss-cross BLM area in the center. 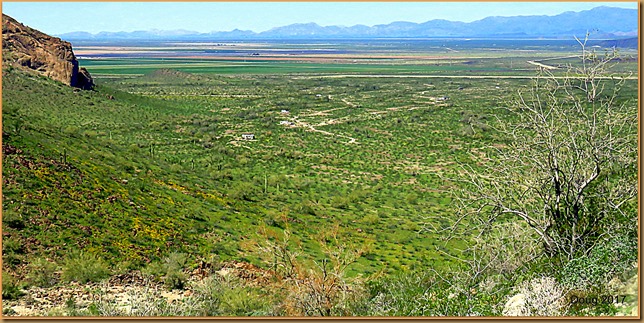 Our Jeep is on the other side of this mountain.  We’re half way around now. 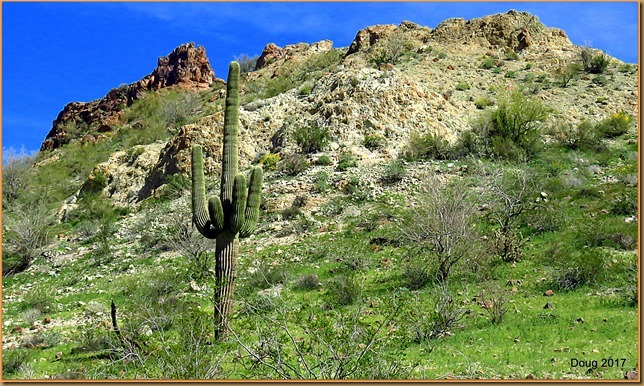 Did our full circle going through two canyons and ended up right back at the Jeep. 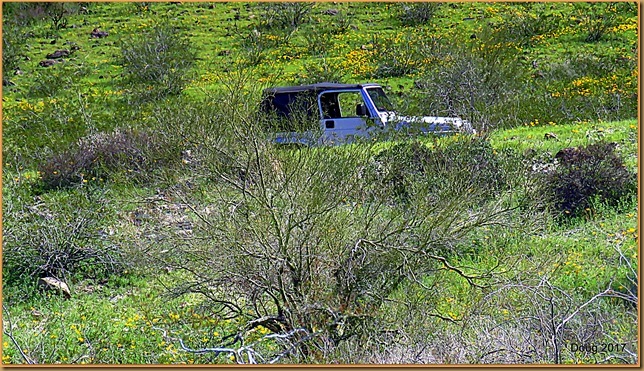 At this point, we leave to head back to camp.  About a quarter mile down the jeep trail there was a truck camper parked next to the trail.  A gentleman was just letting his dogs into the camper and Yuma was barking out the window, so I said, “Beautiful out there, isn’t it?”  He replied that it was, and came over to the Jeep to ask what kind of dog I had.

We started chatting and I found out they were from Canada, so I mentioned I had a blog and many Canadian blog friends.  Turns out both he and his wife have blogs, so we exchanged blog addresses.

His name is Roland, and his wife, Kat.  Roland asked if I saw the petroglyphs back where I was parked and I said no.  He gave me a general idea of where to look, so Yuma and I turned around after saying goodbye and went to find them.  And I did!  I had walked right past them earlier in the day and never saw them.

I could find nothing on the Internet to verify these markings, so can’t tell you much about them or whether they are authentic to a certain time period. 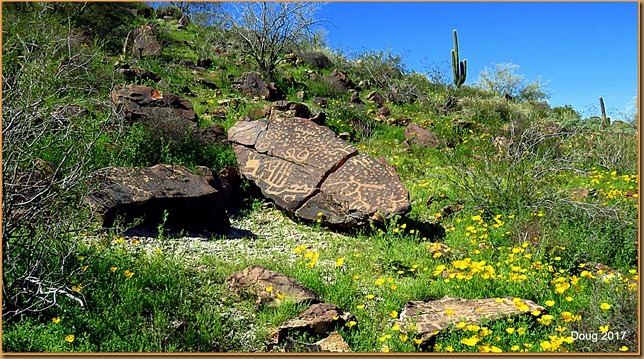 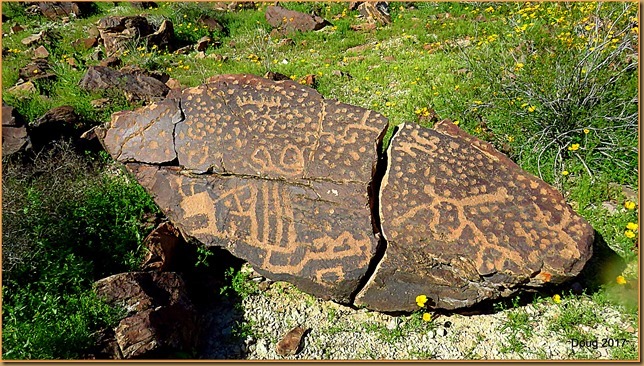 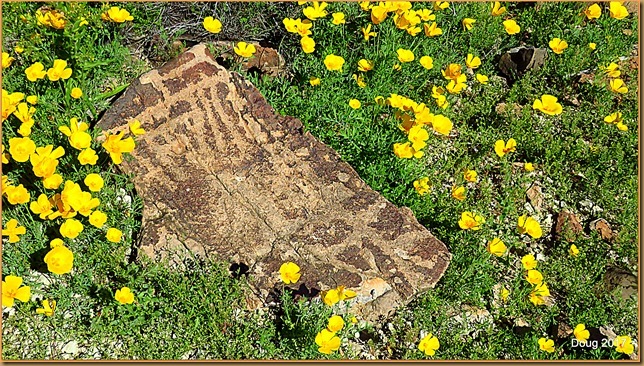 One last look as we head back towards camp after a wonderful two hour hike of around two miles.  Easy day, but it is getting very warm.  Glad to be done early so we can rest. 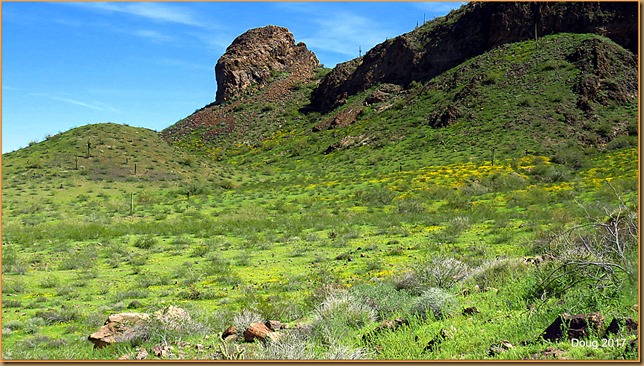 Thank you Roland for sharing your petroglyph find with me.

Well, Yuma and I rested till we couldn’t stand it anymore.   So, I asked Yuma if he wanted to go back up and visit Albert one last time.  It was about 4 p.m. and Yuma was all for it.  As you remember, Albert is a Sonoran Desert Tortoise.

Off we headed back up the slope right South of our camp.  About half way to Albert’s place when we hit this huge boulder.

We get up to those Palo Verde trees you see just above the boulder and start looking for Albert.  I didn’t leave any markings, so wasn’t sure which tree he lived under.  As we’re looking, I see Yuma climbing under one of them, so I call him back and go over and look.

Sure enough, Albert was just coming out of his home for the evening when we met.  This will be the second and last visit.  Don’t want him to get upset and leave his home for good because we keep bothering him.  Again, he knew we were there and in his defensive posture. 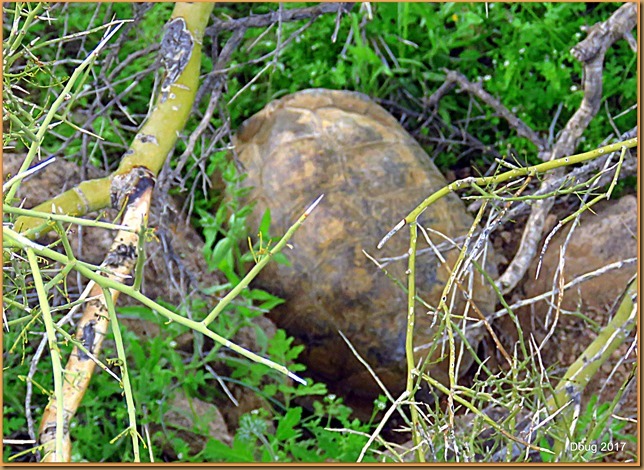 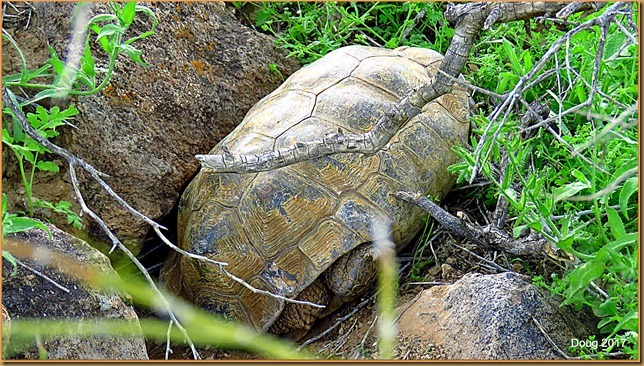 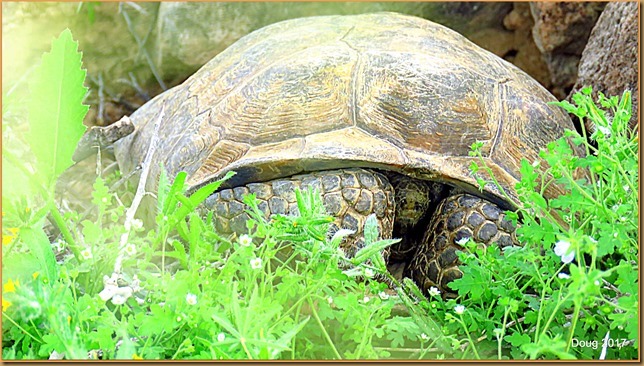 We said our goodbyes to Albert and I hope he lives a happy and productive life on that mountain slope. 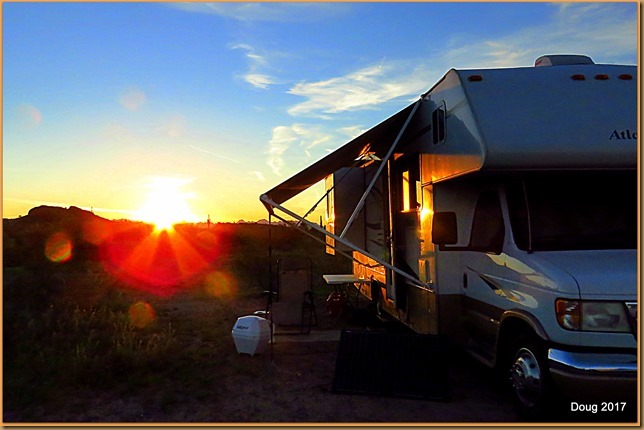