For some reason, I awoke at 7:30 Mountain Time and was ready to get up.  Dawn was just trying to peek out from the East.

Last night, around 9 o’clock I moved my RV to a different place in the Walmart parking lot because a huge semi parked right next to me and kept his motor running.  The Deming Walmart tries to separate the RVs from the big rigs just for that reason, but they still try to park in the RV section.   I don’t think security has the power to tell them to move.  Oh well, that’s why I’m in an RV.   So, I can move if I don’t like my neighbors.

Had a quiet night’s sleep after the passing trains quit for the night.  That was about 11 o’clock.  They were loud.  There must be a switching station close by, because there was a lot of clanging going on.

We didn’t eat breakfast.  I just answered a few blogs and had one cup of coffee and about five little white donuts to hold me till breakfast.  Last night, I decided first thing this morning, we would travel down towards Las Cruces and stop at the Roadrunner rest stop about 60 miles further down I-10. 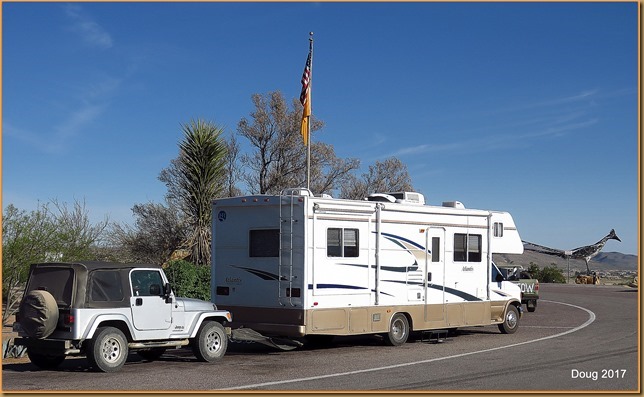 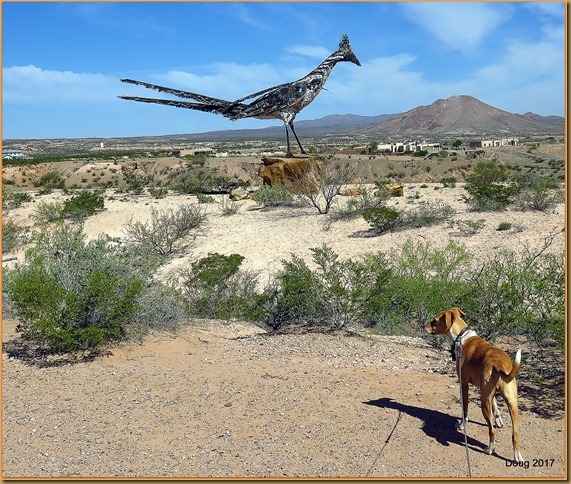 This rest stop overlooks the city of Las Cruces with the Organ Mountains in the background. 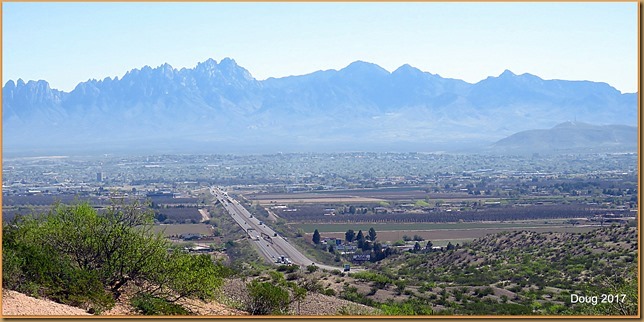 In a little over an hour, we were ready for breakfast.  Had to make a gas stop for the RV and Jeep at the Love’s Truck Stop, the exit before the rest stop.  We sat around there and relaxed while I tried to decide where to stay tonight.

I had planned to stay at Organ Mountains-Desert Peaks National Monument just east of Las Cruces.  I called them to see if I could get dispersed camping and the young guy didn’t seem to know anything except they had campgrounds and there was a fee.

So I decided not to go there and instead, head up towards Truth or Consequences on I-25 and check out the state parks up there.  One of my readers, Moonfly13, suggested several in that area.  They looked good on the Internet, so that’s where we’re headed.  Of course, this changes all my plans for taking the southern route home.  Now, I will be going to Albuquerque and across on I-40 when I leave the area.

One more border guard check that we passed in flying colors on I-25 heading North. 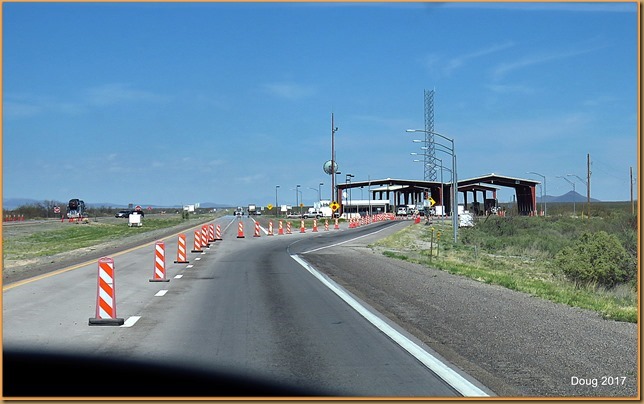 I-25 goes through high desert with a lot of rolling hills and mountains off in the distance.  Beautiful country. 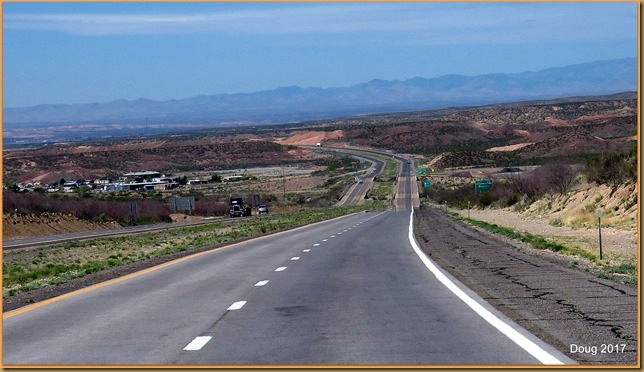 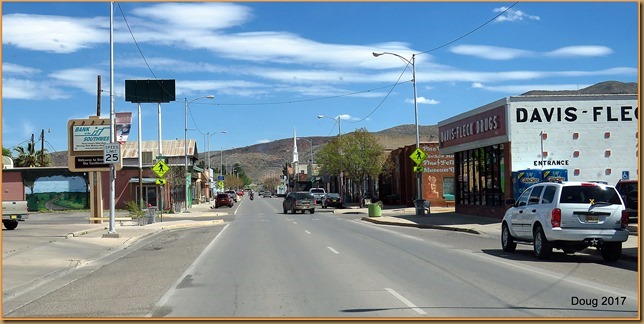 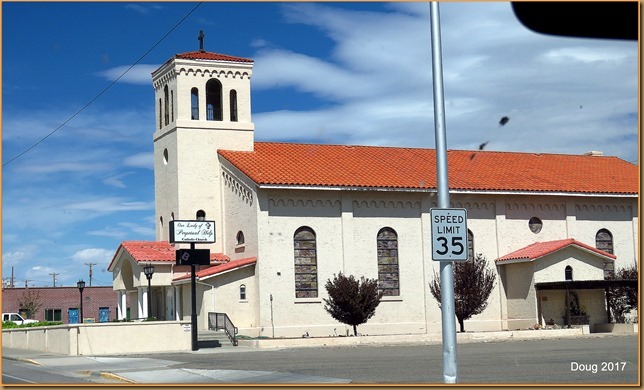 As I was driving through the town, I spied a little park and decided to give Yuma a break, while I checked out the Internet.

I had already passed Cabela Lake SP and made a quick run through part of it.  It was packed with people.  I found later that this is Spring Break, so families and kids are heading for the state parks.

While at the park, I noticed this older guy (around my age) filling his old RV with water across the road from the park.   I went over and chatted with him and he told me there was a Ranger Station at the North end of town and I could find places to boondock there.

On the way out of town, I did stop and the ranger was very nice and told me there were some dispersed camping areas in Cibola National Forest near the San Mateo Mountains about 40 miles northwest of town.  Sounded good to me, so we headed in that direction. He told me it was about 12 miles down a dirt road to Springtime Campground near San Mateo Peak.

I was instructed to take hwy 182 that parallels I-25.  There are the San Mateo Mountains dead ahead. We came to this huge canyon, I believe it is named Colorado Canyon. 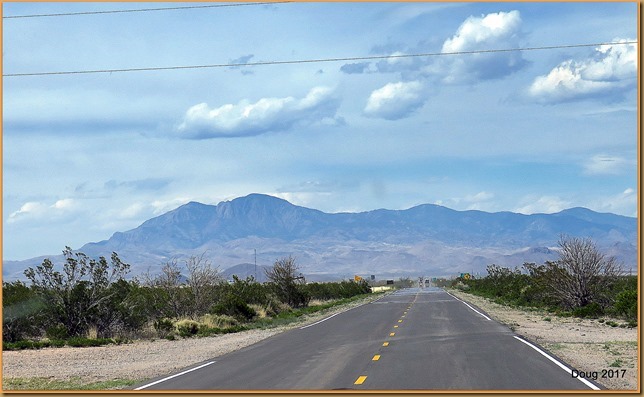 I followed hwy 182 down the canyon and it dead ended at the bottom of the canyon right next to I-25.   Of course, there was no turn around big enough for the RV and Jeep.  So, unhooked and turned around and hooked back up. 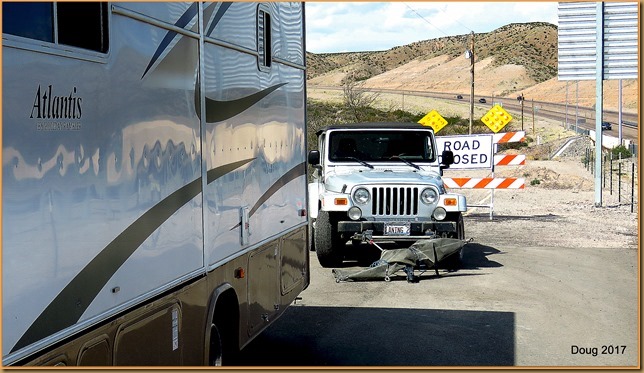 Just up the road, I stopped and talked to a road grader.  He gave me better directions to the dirt road to the campground.  When I turned onto the road, the sign said 24 miles.  Oh no! 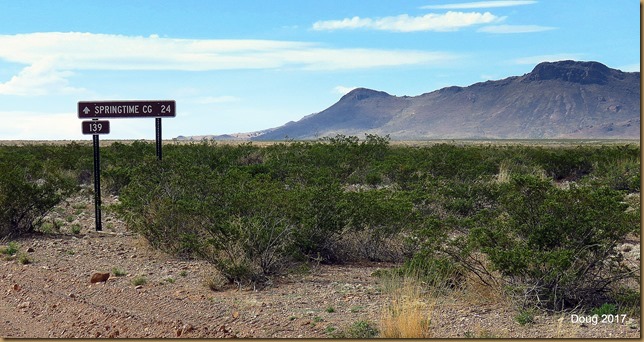 The road was 139 and went past the Bar X Ranch entrance on the way to the forest land.  I kept going West on 139. 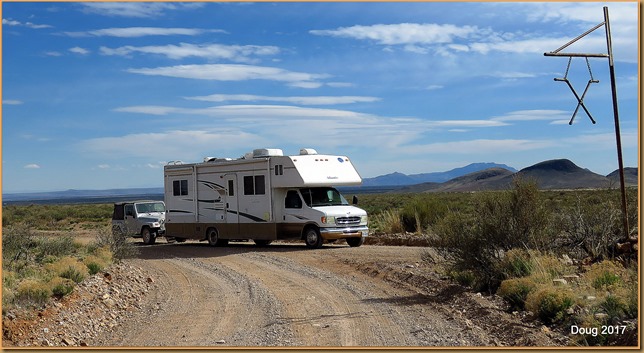 We ended up going about seven miles on this bumpy, dusty dirt road till I reached the Cibola National Forest boundary and then stopped at the first fire pit we came to with enough room to safely park the RV.  We are now in for the night. 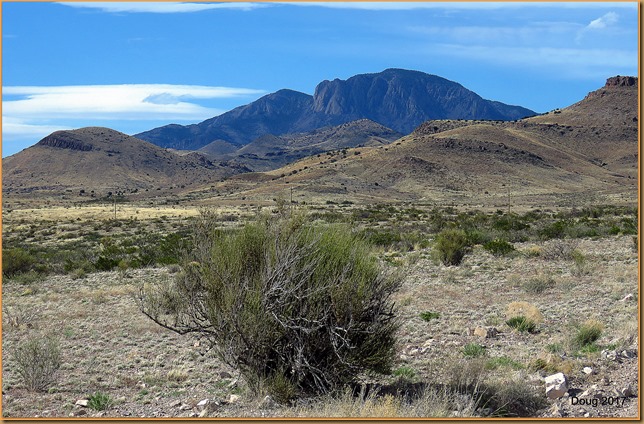 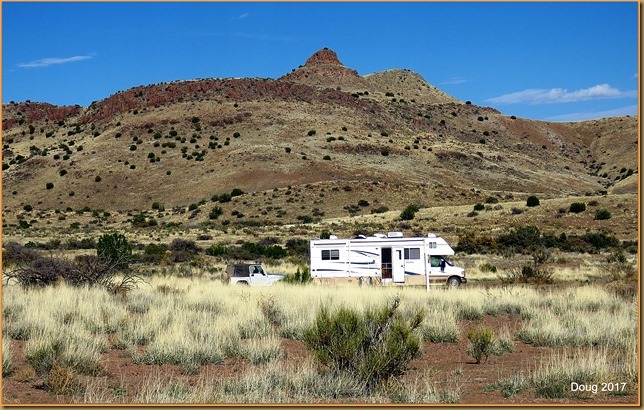 Tomorrow, I will take the Jeep and see what is around the area.  Hopefully, I find a better area with shade trees.  But the further I go, the weaker my Verizon service becomes.