Hope everyone had a great Valentine's Day!  This morning it was nice and sunny.  Woke up to a knock at the door and Tom had a plate full of yummy cupcakes Deb had baked for my special Valentine's Day.  Thank you.

The only thing planned today is to watch the Daytona 500 over at the big tent with Tom and Shane today.  The winds picked up again today.  Probably worse than yesterday, but the tent holds up nicely.

After breakfast, Yuma and I headed over to the tent and Shane was just setting up the TV.   Got all set and the race started at around a little after noon. 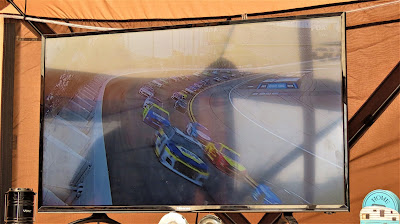 Right off there was a huge wreck on the 15th lap and then rain.  The race didn't start back up until 6 o'clock.

Yuma and I came home and then drove over to the sand dunes rest area to get about four gallons of fresh drinking water.  While there, took a couple pictures of the crowds of dune buggies on the sand hills. 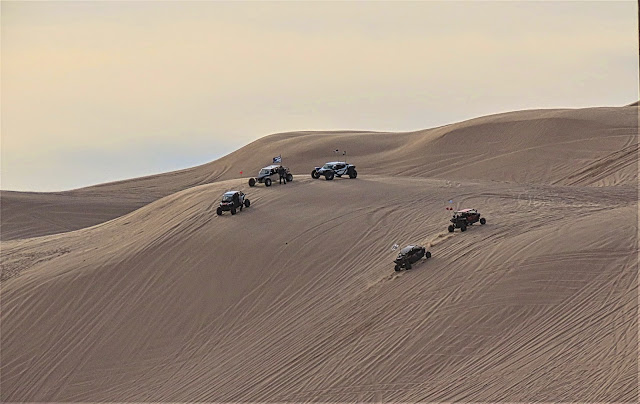 They would zoom down the sand hill on the left and then climb back up on the right. 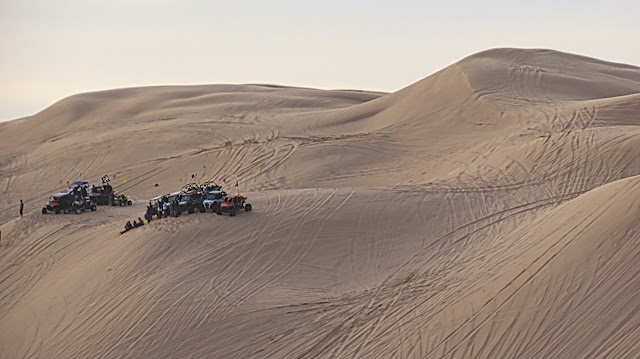 Guess this group is just resting and watching the action.  The sand dunes are huge in this area.

On the way back I took a picture of my neighbor's RV.  Definitely unique.  Solar panels and a wind turbine for power.  You can see about every kind of home out here. 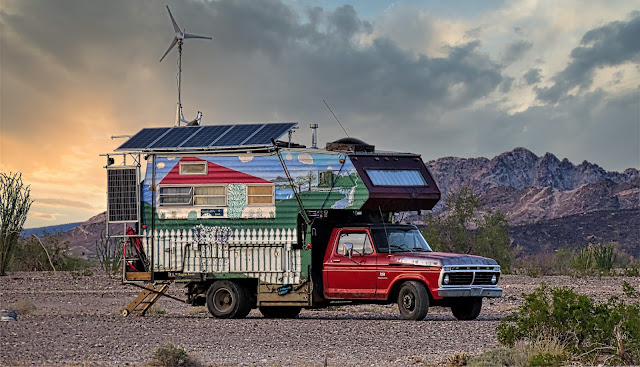 Just as I crossed the railroad tracks I could see a train coming, so I stopped to count the cars.  Trains out here are very long.  Started with three engines then 150 cars and then two more engines and then 97 cars with no caboose 😕.  Almost a four mile train.

Got home made myself a nice steak with potatoes and green beans dinner and followed it up with two of the blueberry cupcakes.  Yummy dinner and dessert!

Around 6 o'clock, Yuma and I headed back over to the tent and watched the race.  Dolly and I were rooting for Logano and he was winning going into the last turn of the race and he was pushed from behind and knocked out of the race.  Someone I never heard of, Michael McDowell from Glendale, Arizona won the race.  Good for him.

Already 11 o'clock now.  Time to close up shop and hit the sack.  Thanks for stopping by.